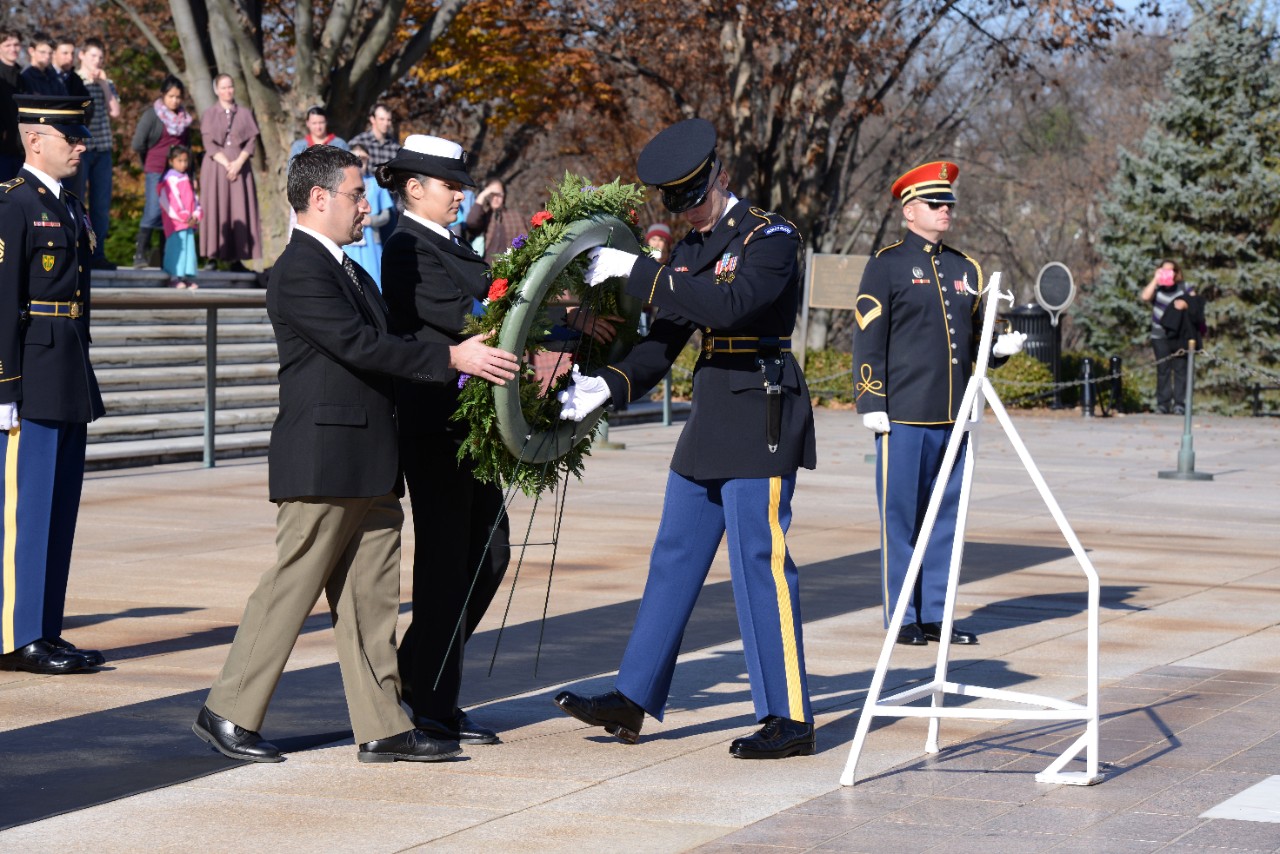 Caption: Mr. John Pentangelo, managing director for the Naval War College Museum, Yeoman 2nd Class Victoria Brunzell assigned to Naval History Heritage Command and members of the U.S. Army 3rd U.S. Infantry Regiment, “The Old Guard, ” place a wreath sponsored by the Naval Order of the United States at the Tomb of the Unknowns at Arlington National Cemetery. The wreath was placed at the tomb in honor of the service members killed during the Japanese attack on Pearl Harbor, Dec. 7, 1941. (U.S. Navy photo by Mass Communication Specialist 1st Class Clifford L. H. Davis/Released)

Yeoman 2nd Class Victoria Brunzell was immensely honored and humbled to be able to lay the wreath and salute those who fell in the Japanese attack which brought the U.S. into World War II.

“Pearl Harbor is such an important event in our nation’s history,” she said. “I think we do veterans a disservice to not honor their sacrifice. I couldn’t have been happier to participate in my own small way.”

Joining Brunzell were Lt. Cmdr. Ben Amdur, director of the Submarine Force Museum and Library, and officer in charge of Historic Ship Nautilus, Dr. Lara Godbille, director of the U.S. Seabee Museum, and John Pentangelo, managing director of the Naval War College Museum.  At exactly 12:55, Brunzell and Mr. Pentangelo laid the wreath before the Tomb. This was the time in Washington when Hawaii was attacked. Afterwards, military personnel present saluted while civilians had their hands over their hearts as the U.S. Army's Old Guard played taps. The Naval Order of the United States sponsored the ceremony.

“Remembering what happened really helps me understand what it is to be an American, and what a responsibility it is,” Brunzell said.

74 years ago, six Japanese carriers launched 181 aircraft into the sky. Made up of dive bombers, horizontal bombers, torpedo bombers, as well as fighters, this squadron flew towards Hawaii—and war. Their mission: cripple the U.S. Navy in the Pacific. Nearly two hours later, they strafed, bombed, and torpedoed almost everything in sight, and caught America by surprise.

For more information on the Japanese attack on Pearl Harbor visit the Naval History and Heritage Command Website at: http://www.history.navy.mil/browse-by-topic/wars-conflicts-and-operations/world-war-ii/pearl-harbor-attack.html.

The Naval Order of the United States was founded in 1890 by descendants of New England seafarers who fought in the Revolutionary War. The Order's charge is to encourage research and writing on naval and maritime subjects and to promote the preservation of historic artifacts and memories of naval and maritime history.