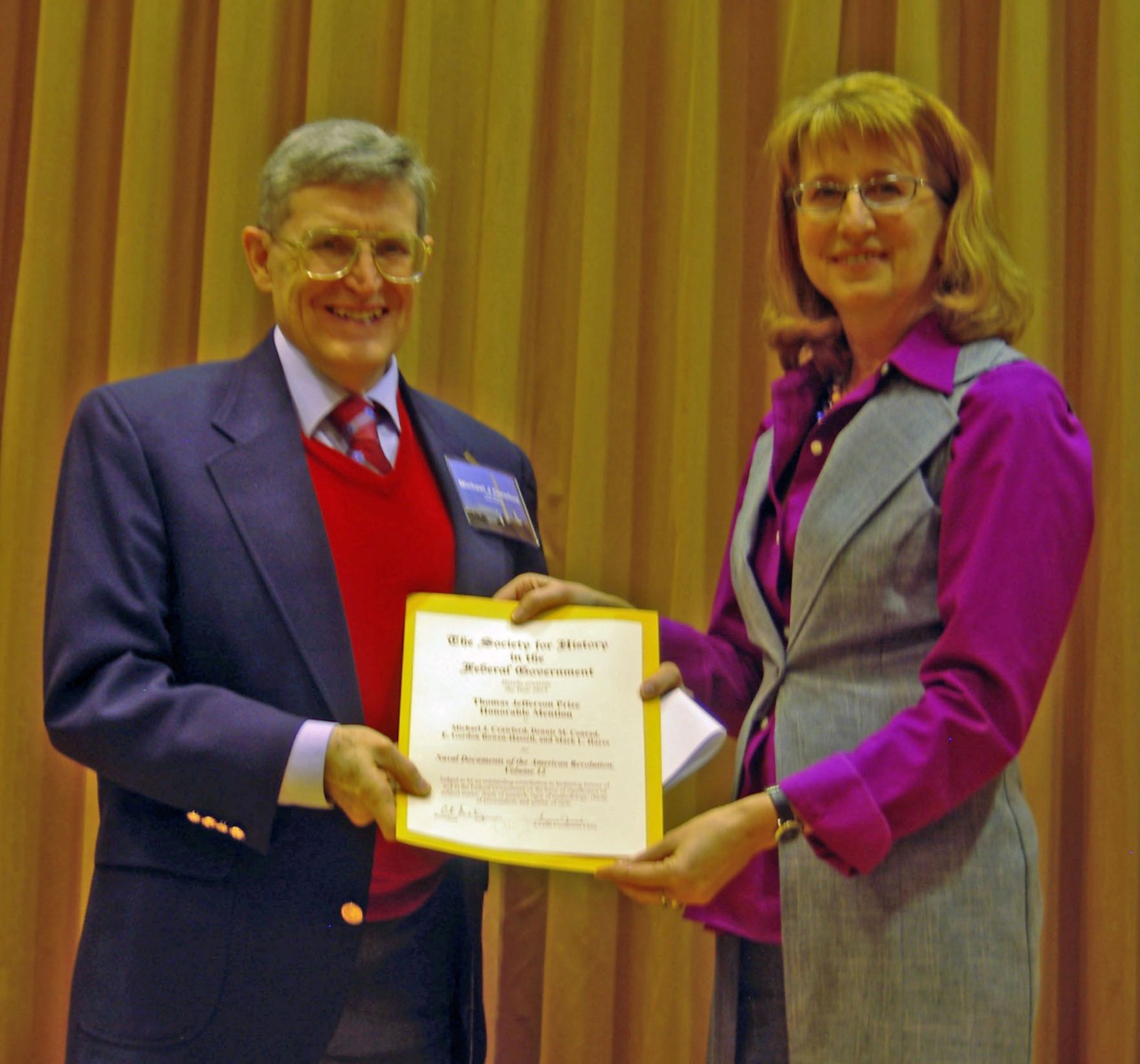 Caption: Michael J. Crawford, Ph.D, editor of Volume 12 of the Naval Documents of the American Revolution, receives the Thomas Jefferson Prize honorable mention from the Society for History in the Federal Government during its annual convention April 25 at Shepherdstown, W.Va. Crawford is the senior historian at the Naval History and Heritage Command. Photo by Chas Downs

From the Naval History and Heritage Command, Communication and Outreach Division

Volume 12 of the Naval History and Heritage Command’s documentary series Naval Documents of the American Revolution recently garnered a “Thomas Jefferson Prize” honorable mention from the Society for History in the Federal Government.

The Society is a professional organization for federal historians and other professionals that recognizes works of history presented in many different formats for a variety of audiences. More than 100 entries were received for the six categories in which awards were given in 2015. The “Thomas Jefferson Prize” is awarded biannually to a documentary history project that contributes significantly to the understanding of the history of the federal government. The top honor was given to A Documentary History of Emancipation, 1861–1867: Series 3, Volume 2: Land and Labor, 1866–67.

Michael J. Crawford, Ph.D, the senior historian for the Naval History and Heritage Command and the editor for Volume 12, attended the society’s annual meeting April 25 at Shepherdstown, W. Va. He accepted the honorable mention award for his fellow historians who worked with him in a collaborative effort to produce the volume: Dennis Conrad, Ph.D., associate editor, and assistant editors E. Gordon Bowen-Hassell and the late Mark L. Hayes.

“I would like to say that we are gratified by the recognition of Volume 12 of our series Naval Documents of the American Revolution, the product of a collaborative effort of many years,” Crawford said. “The maritime story of the War of Independence is extraordinary, much of which has yet to be told and will only be told when the accurate texts are gathered and made readily available in print. Dip your oar into Naval Documents of the American Revolution and prepare for an astonishing journey.”

Volume 12 focuses on the young nation’s war at sea from April 1 to May 31, 1778, as the French prepare to enter the war in support of American Independence, and the British begin to gather their strength in the Mid-Atlantic, while in the European theater, the Continental Navy – along with privateers – threatened British shipping.

Conrad said Volume 12 reflects a change in sea power in the way the naval war of the American Revolution was conducted.

As the fourth editor of the 12-volume series, Crawford proves one doesn’t need to be named William to earn the title. Previous editors have been a trio thusly named:  William B. Clark, William J. Morgan, and William Dudley.

Crawford joined the team Feb. 22, 1982 to work on Volume 9. He earned his doctorate in American History at Boston University and taught in the History Department at Texas Tech University. He also served a fellowship in historical documentary editing for the Adams Papers at the Massachusetts Historical Society. In 2008, the USS Constitution Museum board of directors bestowed on him its Samuel Eliot Morison award in recognition of his scholarship contributions to maritime history.

The award-winning series contains more than 16,000 pages of documents that give insight into the decisions of those who guided the former British colonies to American independence. Each volume, ranging from around 1,000 to 1,600 pages, details several months of the war through diaries, letters, petitions, ships’ logs, muster rolls, orders, official reports and newspaper accounts from both the American and European theaters.

The collection includes American, British, French and Spanish points of view and gives voice to common seamen, civilians, women and slaves as well as policy makers, political leaders and naval and military officers. It serves as a comprehensive resource for naval and military historians and researchers interested in early American history and the naval aspect of the Revolutionary War.

Since then, eight of the past nine presidents have provided forewords. President George H.W. Bush, another naval officer, missed his opportunity during his single 4-year term. It takes about four years on average to produce a volume. President Barak Obama wrote the foreword for Volume 12.

Work has begun on Volume 13. The previous 12 volumes of the Naval Documents of the American Revolution are available online at NHHC’s website: http://www.history.navy.mil/research/publications/naval-documents-of-the-american-revolution.html