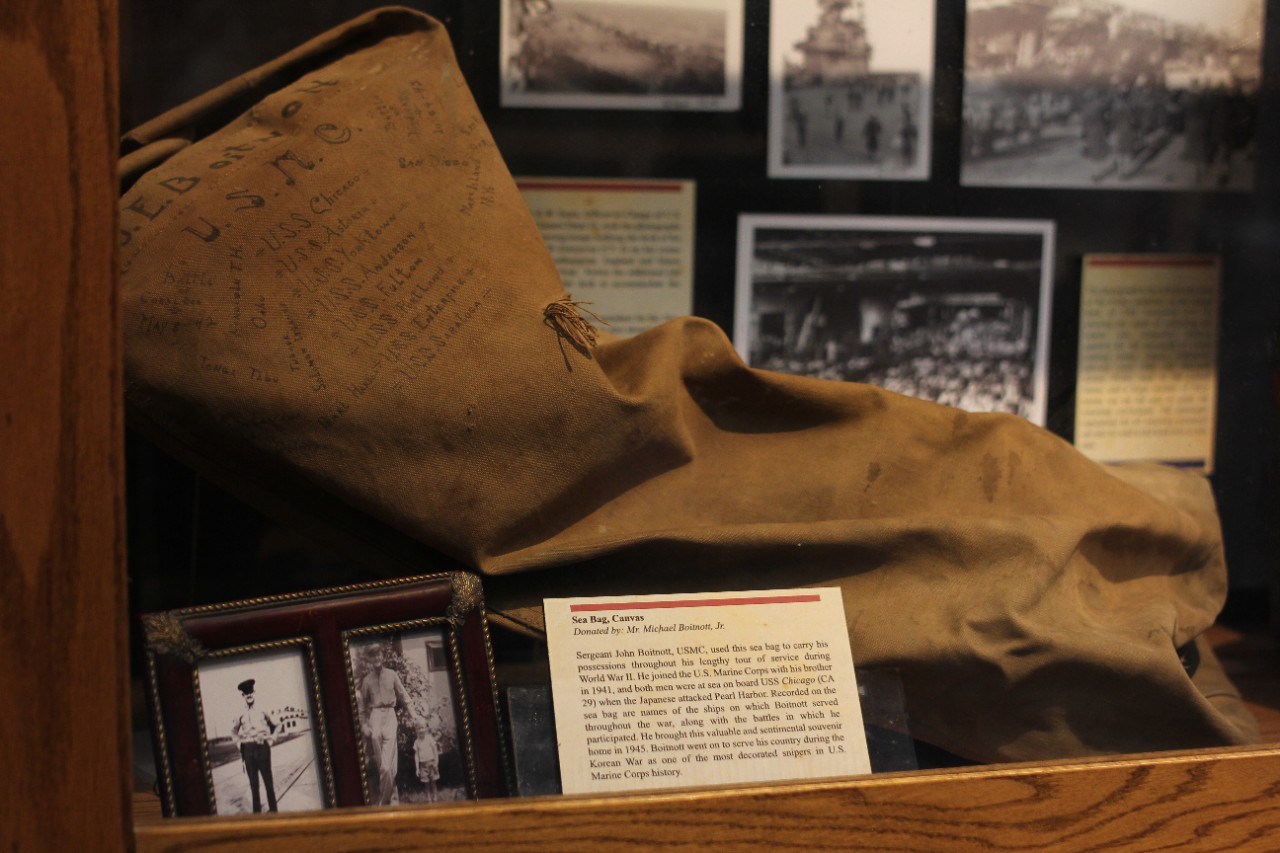 From the National Naval Aviation Museum

“Year of Victory: 1945,” a new exhibit that opened April 6, 2015 at the National Naval Aviation Museum, tells the story of the final year of World War II, one indelibly etched into the nation’s collective memory with famous images of the flag raising atop Mt. Suribachi on Iwo Jima and a sailor kissing a nurse in Times Square. This year marks the 70th anniversary of the end of World War II.

“Seven decades after it ended, World War II remains a period in history that is of great interest to our visitors,” commented Museum Historian Hill Goodspeed. “The fact that it was fought on such a grand scale means that most everyone has some connection to it.” 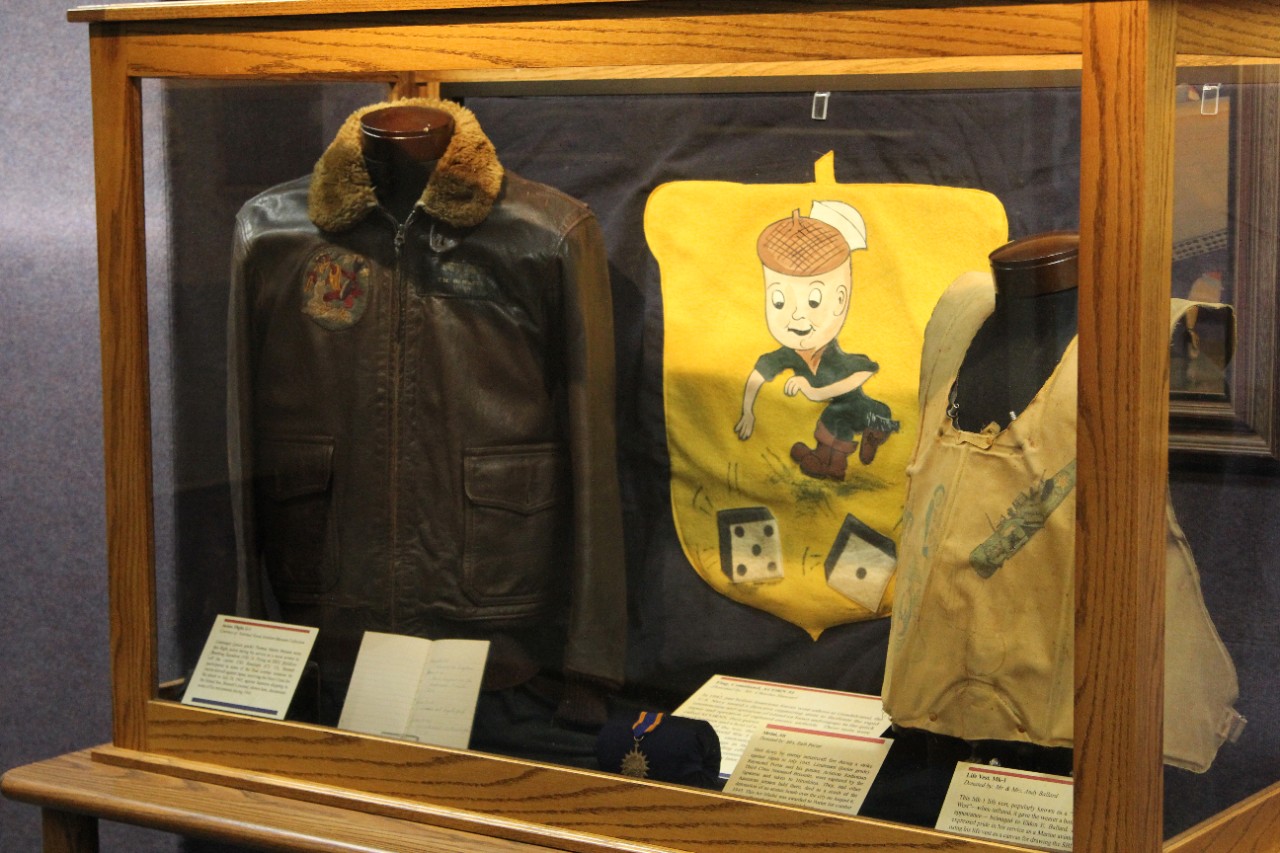 Caption: Artifacts from naval aviators highlight their roles in the final offensives against Japan and include flight equipment and a Distinguished Flying Cross awarded posthumously to Lieutenant (junior grade) Raymond Porter. Captured after being shot down in July 1945, he was held at Hiroshima and died in the atomic bombing of the city.

Entering the exhibit, which is located in the entrance to the museum’s Emil Buehler Naval Aviation Library, visitors are greeted by large photographs of the celebrations that occurred when news of victory both in Europe and Japan reached those on the home front.

A towering display case contrasts two flags with ties to the war’s end, one the Stars and Stripes flown by the aircraft carrier Lexington (CV 16) when she steamed into Tokyo Bay and another a Japanese flag pulled from the bay’s waters by a sailor serving as a crewman on a fleet tugboat. 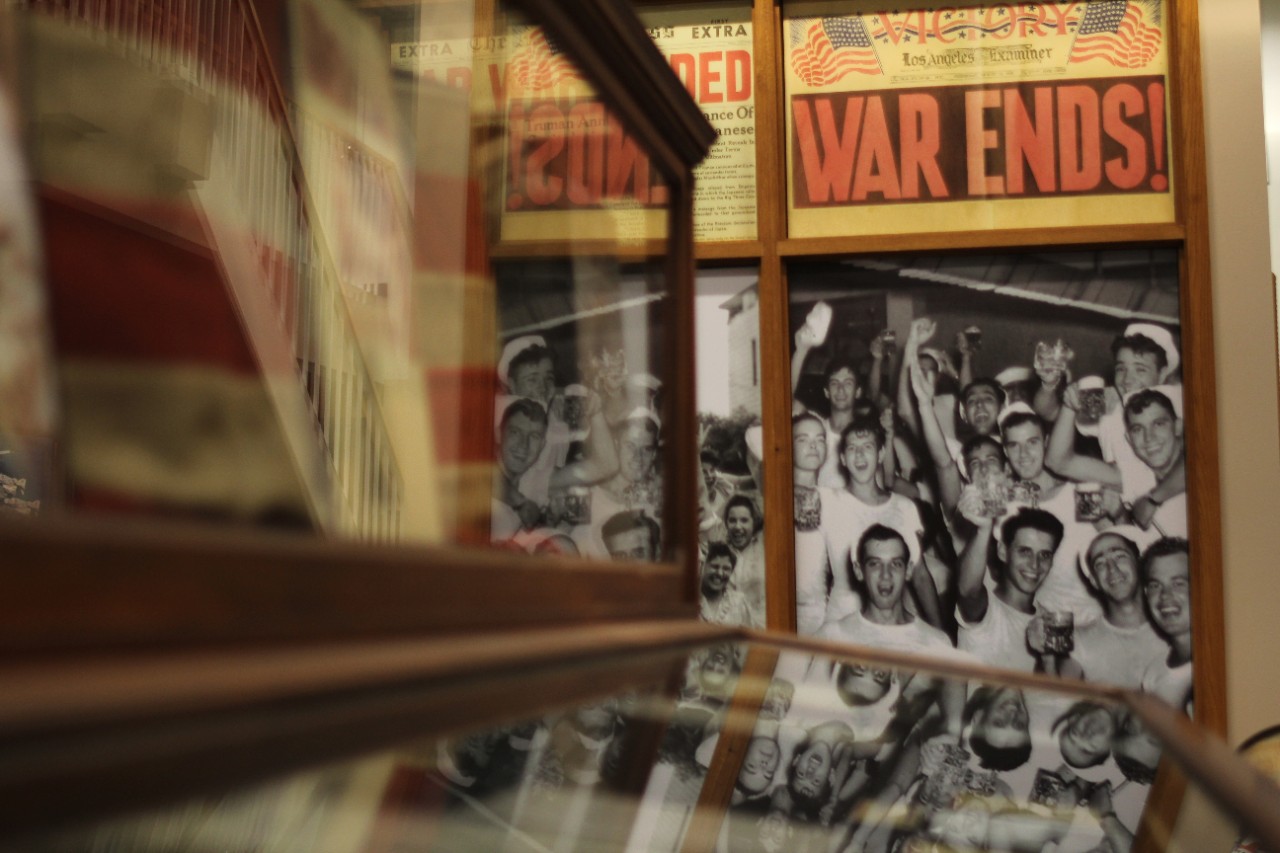 Caption: “The Year of Victory” exhibit will remain in the library gallery for the remainder of 2015.

Goodspeed indicated that in selecting artifacts, the museum staff “wanted to bring those final months of the war home in a very personal way.”

A Marine’s sea bag, its canvas noting the ships to which its owner was assigned and the battles in which he served, points to the months spent overseas by servicemen. Western Union telegrams announcing a sailor’s death in the sinking of the cruiser Indianapolis (CA 35) after the ship delivered components for the atomic bombs to the island of Tinian, points to the sacrifices of service.

An online companion to the exhibit can be viewed at: http://www.navalaviationmuseum.org/history-up-close/victory-year-1945/.

The National Naval Aviation Museum is open from 9:00 am to 5:00 pm on board Naval Air Station Pensacola, Florida.  For further information about the museum, please call 850-452-3604 or visit our website at www.navalaviationmuseum.org.