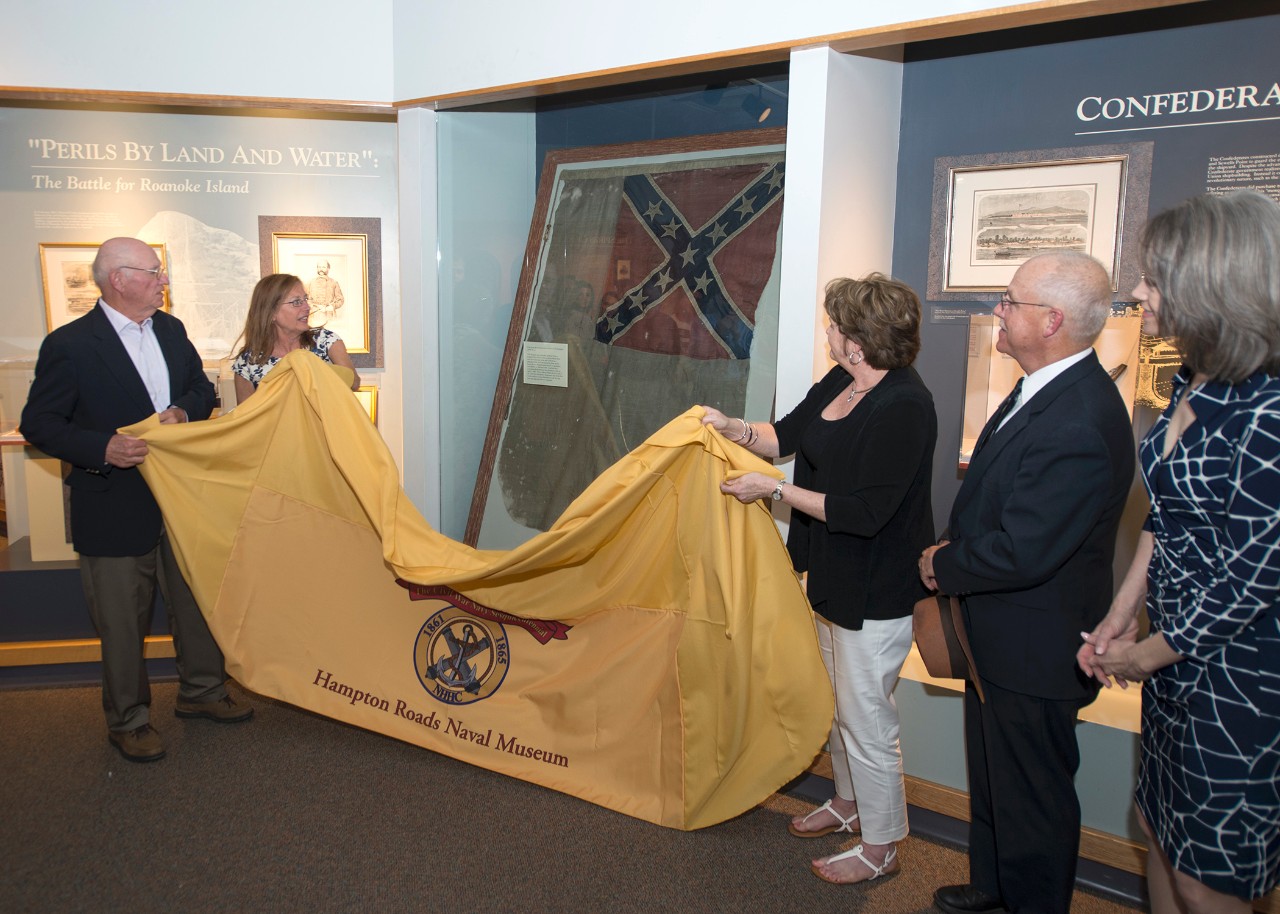 The CSS Hampton’s flag, nearly 150 years old, reaches its final destination as a museum piece at the Naval History and Heritage Command (NHHC) during a ceremony at the Hampton Roads Naval Museum April 22.

The CSS Hampton was destroyed by her crew in 1865 to deny the Union Army its capture.  The captured flag was taken by Lt William Ladd of the 13th New Hampshire Regiment shortly before the ship sank into the James River.

After the war, Ladd kept the flag, where it remained until a Massachusetts law firm settled the estate of a Ladd family member in the 1960’s.

The care of the flag rested with the Harrisonburg-Rockingham Historical Society from the 1960’s until 2013, when they decided to donate the flag to the NHHC in order to conserve and showcase it.

The NHHC decided the flag would best fit in with their Civil War display at the Hampton Roads Naval Museum.

After Joseph M. Judge, curator for Hampton Roads Naval Museum received the flag, he sought out a company specializing in fabric repair to clean and strengthened the flag.

“These flags are very fragile because they were not designed to last past their original purpose,” said Newbold Richardson, textile conservator.  “They were very quickly made and the fabric it was made out of was very fragile. It is a very rare survivor.”

Richardson stabilized the flag by spending over 40 hours on the flag conservation in order to get it ready for museum show quality.

“It is a very unique artifact,” said Judge. “It is something that is rare and it’s a great chance to see something that people don’t always get to see.”

The Hampton Roads Naval Museum, located on the second level of Nauticus in Norfolk, Virginia., introduces visitors to more than 234 years of U.S. Naval history in the Hampton Roads area. The museum is one of nine officially operated U.S. Navy museums, reporting to the Naval History and Heritage Command. The museum houses a rich collection of authentic uniforms, weaponry, underwater artifacts, detailed ship models and artwork.

For more information about Naval History and Heritage Command and its museums, visit www.history.navy.mil.