The team's interim report was finalized earlier this summer, confirming the site's identity and documenting conclusive evidence of a pattern of unauthorized disturbance of the grave site. While the findings remain intact from the interim report, this final report benefits from additional archival research and more exhaustively details the condition of the wreck.

As recently as October, Sailors and Military Sealift Command (MSC) civilian mariners assigned to the submarine tender USS Frank Cable (AS 40), representatives of the U.S. embassy in Jakarta, and naval officers from Australia and Indonesia paid their respects to the crews of USS Houston (CA 30) and HMAS Perth (D 29) during a wreath laying ceremony Oct. 14, at the site of the sunken ships.

The original underwater survey was conducted as part of the Cooperation Afloat Readiness and Training (CARAT) 2014 exercise in June, U.S. Navy divers from Mobile Diving and Salvage Unit (MDSU) One Company 1-5, along with personnel from the Indonesian navy, surveyed the wreck during a joint training evolution. Over the course of 19 dive excursions, both ends of the wrecked vessel were marked with buoys and the exposed port side, as well as the deck, was documented using video recording.

The site of the sunken ship is the final resting place of approximately 650 Sailors and Marines. The assessment noted there were indications that unknown persons illegally removed hull rivets and a metal plate from the ship, as well as engaged in other unauthorized activities. U.S. and Indonesian representatives are currently coordinating to develop measures to limit continued disturbance of the site.

Houston, nicknamed "The Galloping Ghost of the Java Coast," was sunk in combat during the World War II Battle of Sunda Strait in 1942. Capt. Albert H. Rooks, the ship's commanding officer who was killed in action, posthumously received the Medal of Honor for extraordinary heroism, while USS Houston was awarded two battle stars, as well as the Presidential Unit Citation.

For more information on the previous interim report and findings, see: www.navy.mil/submit/display.asp?story_id=82827.

For more information on the USS Houston, visit: www.history.navy.mil/danfs/h8/houston-ii.htm. 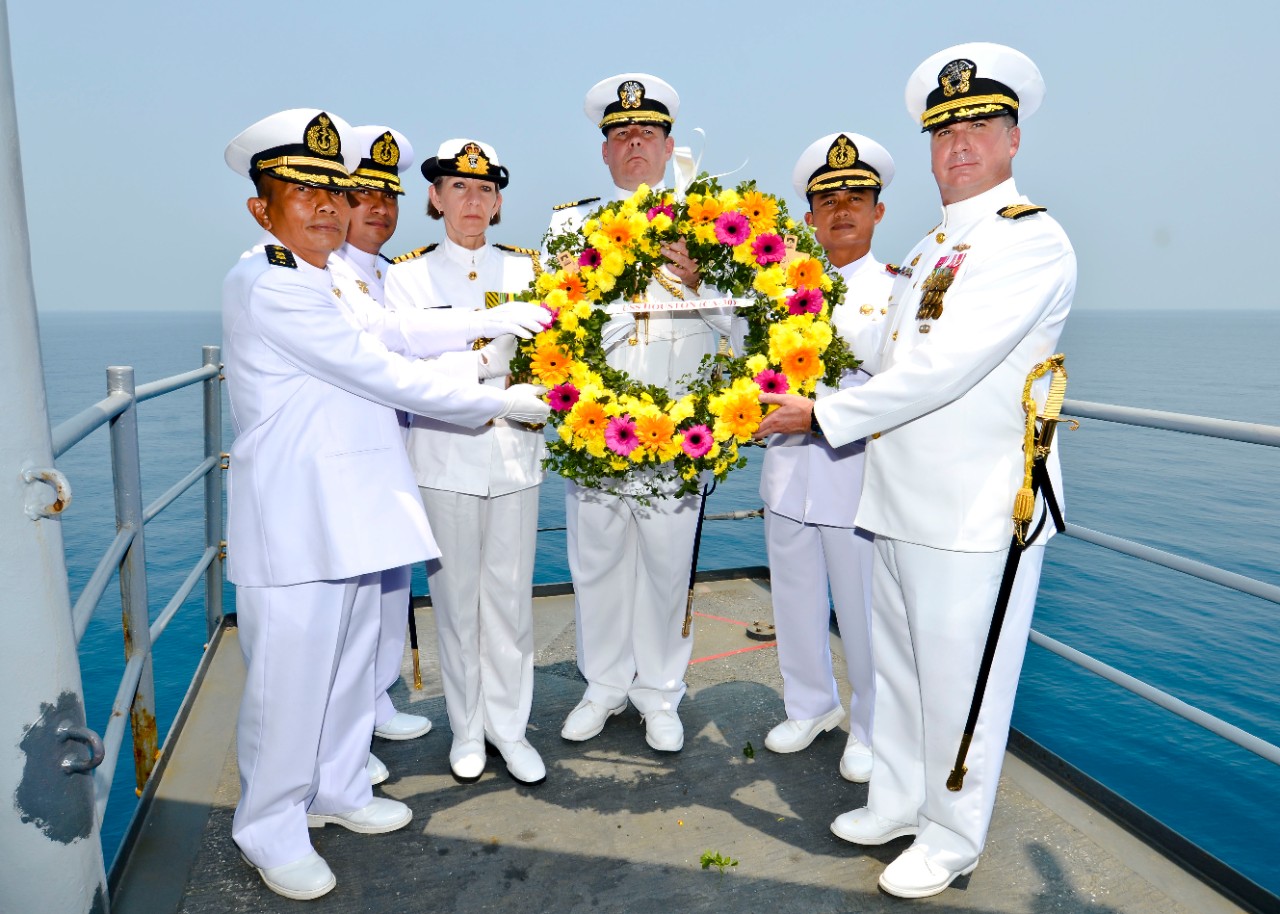 Caption: 141014-N-WZ747-087 JAVA SEA (Oct. 14, 2014 ) Naval officers from Australia, Indonesia and the United States participate in a wreath-laying ceremony aboard the submarine tender USS Frank Cable (AS 40) in honor of the crews of the U.S. Navy heavy cruiser USS Houston (CA 30) and the Royal Australian Navy light cruiser HMAS Perth (D29). Both ships were sunk during World War II by Imperial Japanese forces within Indonesian waters during the battle of Sunda Strait in February 1942. Frank Cable, forward deployed to the island of Guam, conducts maintenance and support of submarines and surface vessels deployed to the U.S. 7th Fleet areas of responsibility and is on a scheduled underway. (U.S. Navy photo by Mass Communication Specialist 3rd Class Jon Erickson/Released)