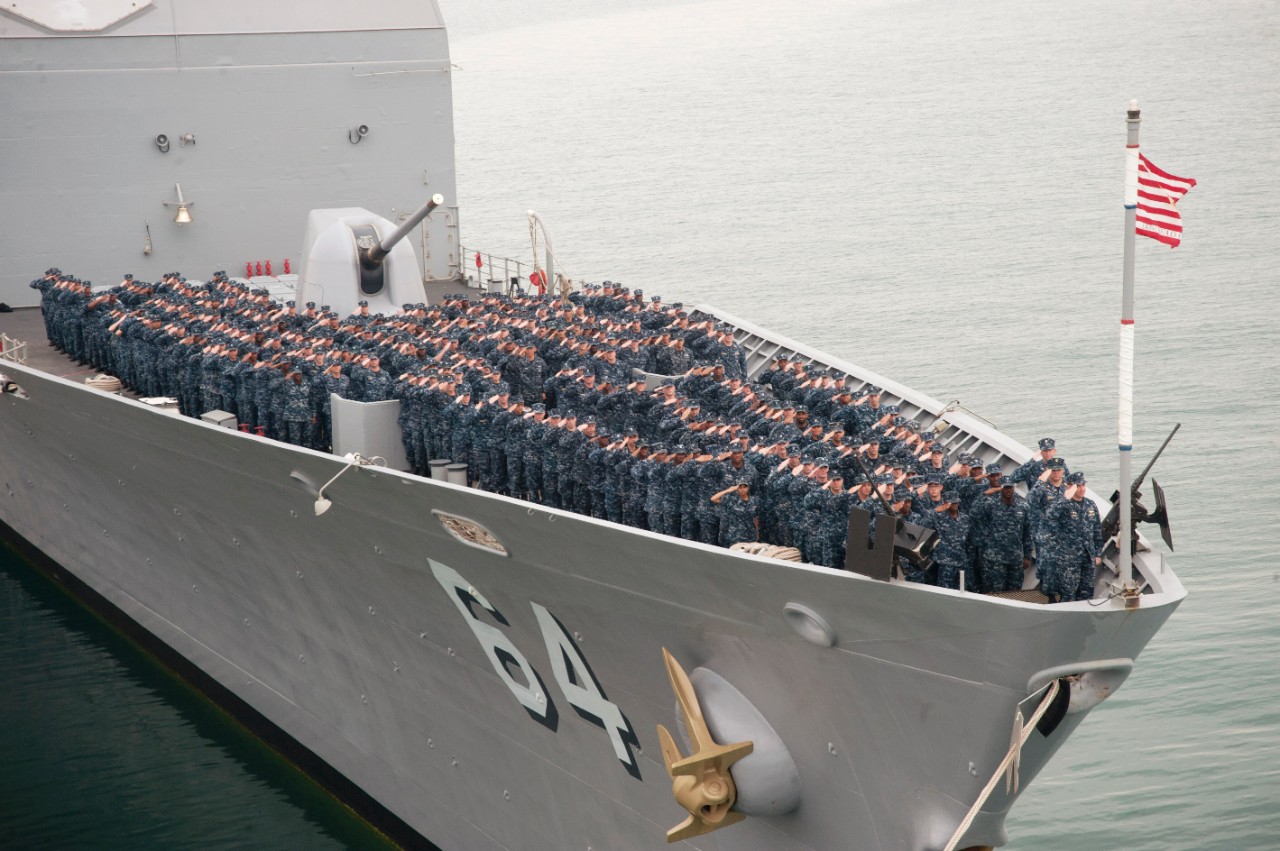 MAYPORT, Fla. (NNS) -- The USS Gettysburg (CG 64) renamed their Wardroom after the Battle of Gettysburg hero and recent Medal of Honor recipient, First Lt. Alonzo H. Cushing, during a dedication ceremony aboard the ship Nov. 19.

First Lieutenant Cushing and his artillery battery held a position atop Cemetery Ridge during Pickett's Charge the Confederacy's "High Water Mark." Cushing, facing down over 10,000 charging Confederate Soldiers, held his position and continuing to direct his battery's cannon fire despite being wounded twice. Eventually wounded a third and final time, Cushing fell that day, but his extraordinary heroism and leadership undoubtedly played a significant role in turning back the Confederate onslaught on Cemetery Ridge, ultimately leading to a victory by the Union Army. After 151 years, believing it never too late to honor a hero, President Barack Obama awarded the 64th Medal of Honor to Cushing in a White House ceremony earlier this month. According to USS Gettysburg (CG 64) Commanding Officer Capt. Charles B. Cooper, it is only fitting to name the wardroom "Cushing Wardroom" aboard the ship that bears the number 64.

"We decided to name the wardroom after First Lieutenant Cushing for several reasons. The story of his bravery and fortitude in the midst of 'Pickett's Charge' is something that inspires me and I hope will inspire Officers aboard Gettysburg for years to come," he said.

USS Gettysburg (CG 64) has many historical reminders of the courage, dedication, and sense of purpose displayed by those who fought at the namesake battle. According to USS Gettysburg (CG 64) Force Protection Officer Lt. j.g. Zach Wardelman, the ship's motto, "Deeds, not words" is emblematic of the lasting legacy and tradition that connects them to the excellence and heroism of those who have gone before.

"I believe it is important for any leader to learn from the past so as to apply it in a positive way or to learn the lessons of history," he said. "As a junior officer onboard USS Gettysburg (CG 64) I believe it is important to study our namesake not only for the numerous examples of heroism, but for the countless examples of junior leadership that exemplify the Navy's core values of honor, courage and commitment."

The Battle of Gettysburg (July 1-3, 1863} involved the largest number of casualties of the entire Civil War and is often described as the war's turning point. Union Maj. Gen. George Meade's Army of the Potomac defeated attacks by Confederate Gen. Robert E. Lee's Army of Northern Virginia, ending Lee's attempt to invade the North. Between 46,000 and 51,000 soldiers from both armies were casualties in the three-day battle. On November 19, 1863 President Abraham Lincoln used the dedication ceremony for the Gettysburg National Cemetery to honor the fallen Union soldiers and redefine the purpose of the war in his historic Gettysburg Address. According to Cooper, the ship's namesake is a big part of honoring those who died in that three day battle.

"It's important that we remember our heritage and where we came from. The Battle of Gettysburg was a pivotal moment not just in the Civil War, but really in all of American History," he said. "Over the course of those three days many great men performed acts of heroism which ought to serve as examples to us even today as we serve our country. Maintaining that connection with our namesake battle builds a sense of camaraderie amongst our crew and reminds us of why we do what we do every day."