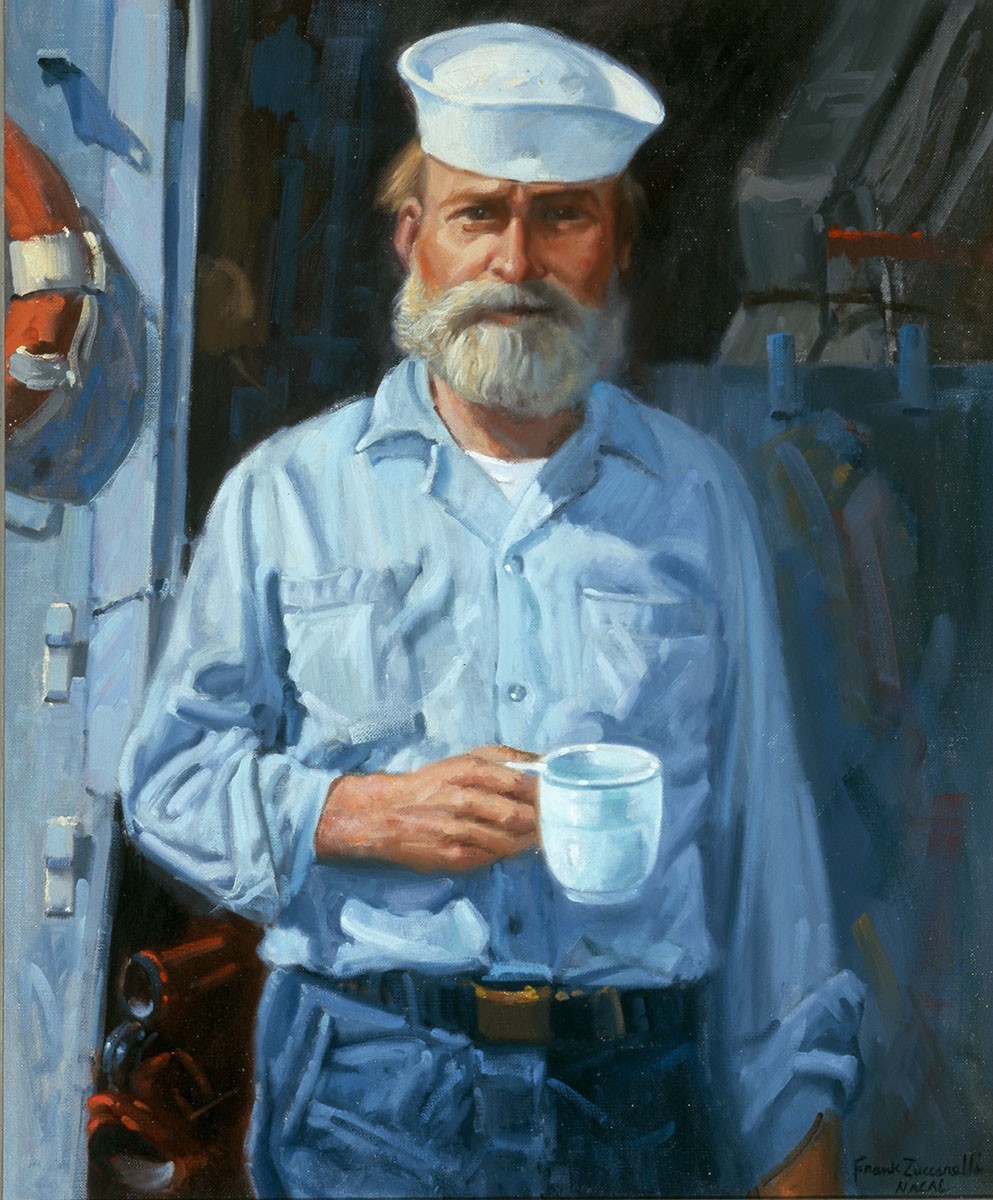 Title: The oil painting "Old Salt of the Sixth Fleet," by Frank Zuccarelli

WASHINGTON (NNS) -- The Feb. 7 release of "The Monuments Men," a movie telling the story of a multi-national WWII military unit that was charged with recovering priceless artwork that Nazis systematically took or destroyed from countries they occupied during the war, portrays the value the military placed on irreplaceable art and artifacts. It's a value that holds true today.

Though the Nazi Party of Germany may have been the most notorious of art thieves, they were neither the first nor the last to recognize the value of art. Though The Monuments Men story may be 'Hollywood-ized' - the illegal acquisition of art continues today, said Gale Munro, head curator of the Naval History and Heritage Command's (NHHC ) Navy art collection. In fact, it has happened with artworks in the Navy's collection, but -- through a little luck, but mostly through determination -- she and her team have been successful in the recovery of missing original pieces.

"It's a topic that really gets me on my soapbox and I'm not too likely to pull any punches when talking about some of the experiences we've had with chasing down misappropriated art and irresponsible borrowers," Munro said. "We might wish to call it 'stolen art,' but we make allowances for the possibility of a misunderstanding."

Unlike the soldiers in the movie, Munro isn't limited to arcane records and maps or stolen intelligence to try and find the artwork that has been lost; she uses more modern tools.

"The Internet and online auctions are useful things for museums looking for misappropriated art," Munro said. "A lot of auction houses are putting their catalogs online these days, so it has expanded my surfing area. I have several search criteria that make the task efficient. Having worked with Navy art for more than 20 years, I'm pretty good at spotting them."
Her first experience in finding a lost piece was when she saw an oil painting from 1943 called 'Windward Hill' by Albert Murray being sold on the eBay website, more than 11 years ago.

"The painting of camouflaged anti-aircraft batteries at Guantanamo Bay was the first missing painting that I found on eBay in 2001," Munro explained. "Our earliest record of it being missing was dated 1970, but it was likely gone long before then. It was easy to prove it was ours, because the first thing the Combat Art Section did when artists turned in paintings was to number them right on the front, usually next to the signature. Often the second thing they did was take a picture of it. Most artists wrote descriptive captions that they sent in with the pictures. For this painting, the number on the front of the painting corresponded to the caption that described the scene." 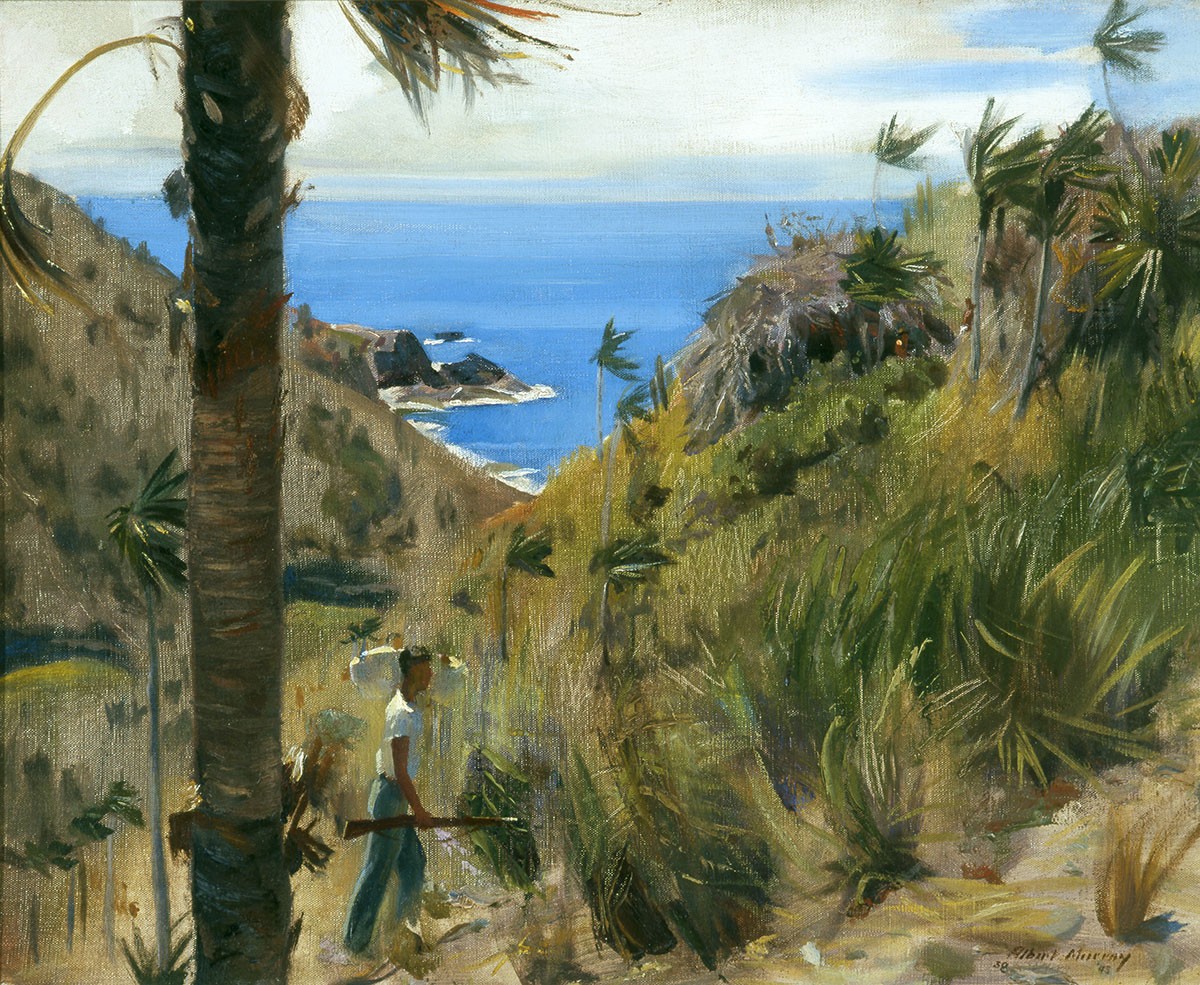 Description: The oil painting "Windward Hill," by Albert Murray, painted in 1943, was found in 2001 in an auction on the Ebay website.

Once a work of art is at auction, the recovery process has to be quick in order to retrieve the artwork in time. It can be stressful for a person like Munro who lives and breathes the collection she is in charge of.

"Recoveries are a bit nerve-wracking because the fact that they're in an auction puts things on a deadline," Munro said. "Recovery can get a lot messier if the painting changes hands again. To decrease the pain to all involved, you want to get it before it sells. If it changes hands again, you know you are going to ruin someone's day over this. It truly is a case of 'buyer beware' on the art market."

"After the first recovery, I would have been just as happy if another had never appeared," she admitted.

Munro's second recovery of an auctioned painting belonging to the Navy was helped by a stroke of luck.

"By chance, I saw the auction the same day I was hanging pictures in a high-level Pentagon office," she said. "The appreciative incumbent said, 'If there's anything I can ever do for you...' So I asked for help getting the auction stopped. By the end of the day NCIS was on red alert. The field agent who handled it in the end told me that the bosses were planning a sting operation until a field agent said 'Let's just go knock on the seller's door and see what happens.' The seller was very understanding, she said that she'd bought it in a yard sale and gave it up immediately."

The painting, "Castelmarre, Bay of Naples," a watercolor by Albert Murray, had been listed as missing prior to 1969.

Since then, she has reacquired three more pieces of art. One of them was retrieved from a government employee who claimed to have "no idea" that the gift they were given was taken from a military collection.

"He said that his staff had given it to him as a going-away present," Munro explained. "Which brings us to another point about misappropriated property -- you can't pass a bad title. If you don't own something, no matter how many times it changes hands, ownership of the item doesn't magically become legal at some point, even if you have a credible tale to cover you."

Sometimes she has been surprised, when artworks are found in offices, for example.

"All of a sudden we will get a call from an office and they'll say, 'We have this painting and it has your name on it on the back.' We then ask for a description or a snapshot of it. They send it and, sure enough, it's one that has been gone awhile. It doesn't happen often but it does happen," Munro said.

It helps that there is no set time limit on finding the property.

Today, the Navy Art Collection has taken more stringent steps to improve the security of their loans.

"Nowadays we keep a closer eye on our borrowers," Munro said. "We have strict rules about borrowing paintings, borrowers sign an annual loan agreement, and we do office inspections."

To preserve the priceless holdings, Munro recommends Sailors take a close look around their spaces. There are often display cases with artifacts or artwork hanging on the walls that are either a part of the U.S. Navy collection, or if it was donated directly to the command. Registering those artifacts and artwork with NHHC will ensure the Navy has a full accounting of its property, that it is identified clearly as such, and that the command has a proper loan agreement with NHHC. Ultimately it is about safeguarding the Navy's past.

What should someone do if you spot an artifact or work of art that you believe has been misappropriated? Visit the Navy Art Collection's web site for contact information athttp://www.history.navy.mil/branches/nhcorg6.htm