GROTON, Conn. (NNS) -- The U.S. Navy celebrated the 60th anniversary of the commissioning of USS Nautilus and the birth of the nuclear Navy Sept. 30, 2014 in a ceremony aboard the historic ship in its home at the Submarine Force Museum and Library in Groton, Conn.

It was Sept. 30, 1954, when the submarine community took the first step in shifting from diesel-driven engines to those powered by the collision of atoms, an evolution that eventually resulted in the all nuclear-powered submarine force of today.

"A lot has been said about the teamwork it took to make the Nautilus. That hasn't changed. That same teamwork is needed when building subs today, and that role continues today with the Ohio replacement program." said Adm. John Richardson, Director of the Naval Nuclear Propulsion Program.

The possibility of nuclear-powered vessels was just a dream in 1946 until the successful development of a nuclear propulsion plant by scientists and engineers at the Naval Reactors Branch of the Atomic Energy Commission. The program was driven to completion under the leadership of then-Capt. Hyman G. Rickover, widely-known as the "Father of the Nuclear Navy."

Many in attendance at the ceremony recalled their service onboard Nautilus as the pinnacle of their Navy careers and shared their fondness for Vice Admiral Eugene "Dennis" Wilkinson, the ship's first commanding officer. Wilkinson passed in 2013, but still left some words of wisdom for the crowd.

"In Dennis Wilkinson's words 'They may make em' better, but they will never be the first,'" said retired Capt. Ray Engle, a young officer at the time of the commissioning.

Henry Nardone Sr., 92, was a project officer on Nautilus. He said working on the nuclear-powered submarine was the highlight of his 12 1/2-year naval career. He started as a "fresh-caught" lieutenant junior grade when the keel was laid in August 1955 and was there through her commissioning into the Navy on Sept. 30, 1954. As a civilian, he was in charge of her first major overhaul in 1973 at Electric Boat where he was manager of the overhaul program.

"It was the most significant assignment I had in the Navy, and the one I enjoyed the most," Nardone said from his home in Westerly, just a few miles from Groton. "I couldn't ask for a better assignment for myself or my career. Not only was it the highlight of my career, but the highlight of the submarine service in the country. It was one of the most significant events in submarine design construction ever and changed the whole world of submarines."

Just three years after being authorized by Congress in 1951, USS Nautilus was commissioned, Sept. 30, 1954. It wasn't until the morning of Jan. 17, 1955, however, when its first skipper, Cmdr. Eugene P. Wilkinson, signaled the message: "Underway on Nuclear Power."

From then, Nautilus went on to break numerous speed and distance records for submarines. Three years later, Nautilus completed a secret mission called Operation Sunshine when the boat passed under the North Pole on Aug. 3, 1958, the first watercraft to cross the "top" of the world. "For the world, our country, and the Navy - the North Pole," declared the boat's commanding officer, Cmdr. William R. Anderson.

Decommissioned and stricken from the Navy rolls in 1980, Nautilus' future was assured when the Secretary of the Interior designated the submarine as a National Historic Landmark May 20, 1982.

After a historic ship conversion, Nautilus opened to the public April 11, 1986, eighty-six years to the day after the establishment of the U.S. Submarine Force, to continue her service as an example of the Navy's pioneering role in harnessing nuclear power, as the first in a fleet of nuclear-powered ships, and as steward of the American submarine force's reputation for and history of operational excellence.

"I was originally a plankowner in the 1950s and then a chief of the boat in the 1960s," said retired Master Chief Engineman Robert Ringer. "I had a good time, the whole time I was there."

He believes he is fortunate to have served on Nautilus.

"I am glad that we get honor our past, most of the other ships her age are in the scrapheap somewhere," he said.

The Submarine Force Museum maintains the world's finest collection of submarine artifacts. As the only submarine museum operated by the United States Navy, it is the primary repository for artifacts, documents and photographs relating to U.S. Submarine Force history. The museum traces the development of the "Silent Service" from David Bushnell's Turtle, used in the Revolutionary War, to the Ohio and Virginia-class submarines.

See additional coverage of Nautilus and the Submarine Force at the links below:

60 Years Ago Today: USS Nautilus and the U.S. Navy Get Underway on Nuclear Power
http://www.navalhistory.org/2014/09/30/60-years-ago-today-uss-nautilus-and-the-u-s-navy-get-underway-on-nuclear-power 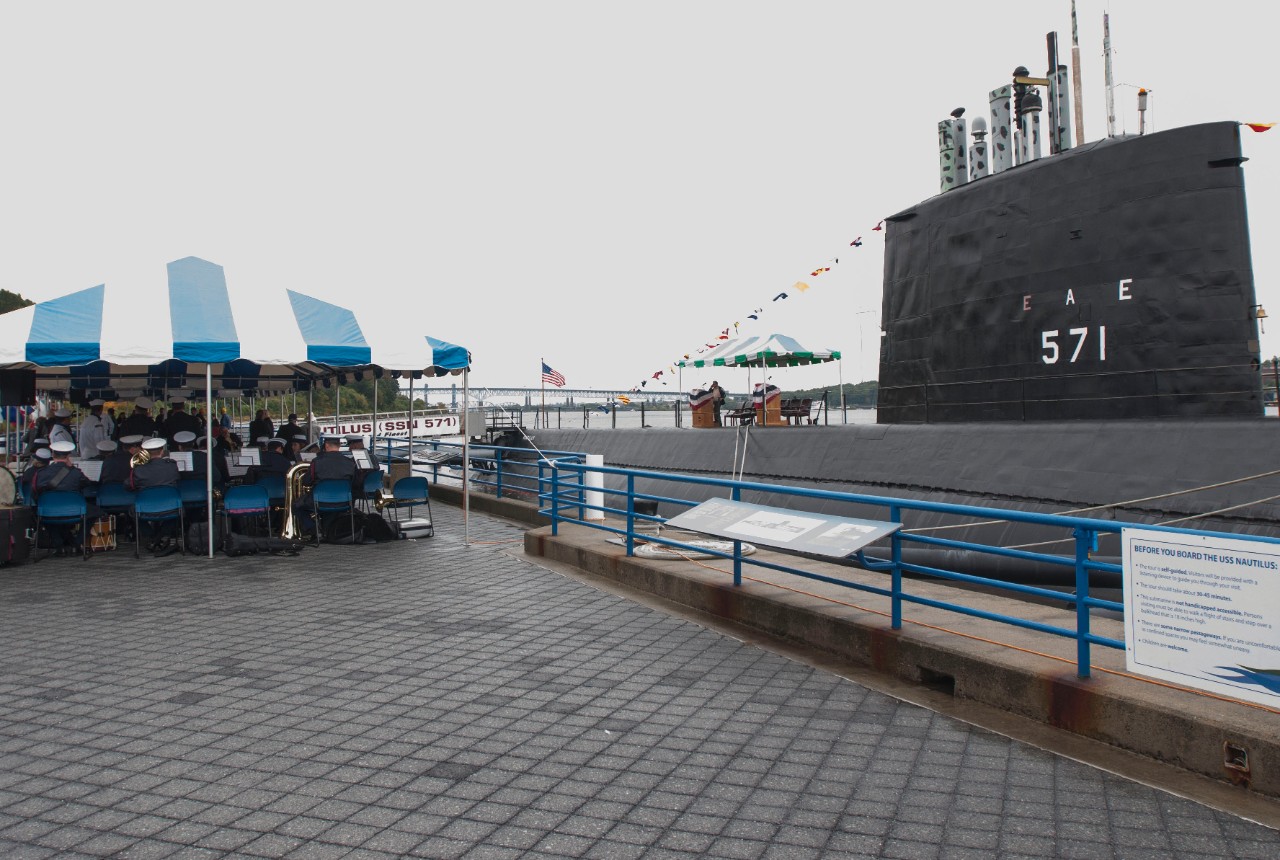 Caption: 140930-N-CS953-007 GROTON, Conn. (Sept. 30, 2014) Senior Navy leaders, past and present crew members of USS Nautilus, their families, and government officials gather at the Submarine Force Museum and Library and Historic Ship Nautilus to celebrate 60 years since the commissioning of the nuclear powered submarine USS Nautilus (SSN 571. Nautilus, the first nuclear vessel, was a record breaker and pioneer, serving in the navy for 25 years before being retired as a national historic landmark and becoming part of the museum. (U.S. Navy photo by Mass Communication Specialist 1st Class Tim Comerford/Released)