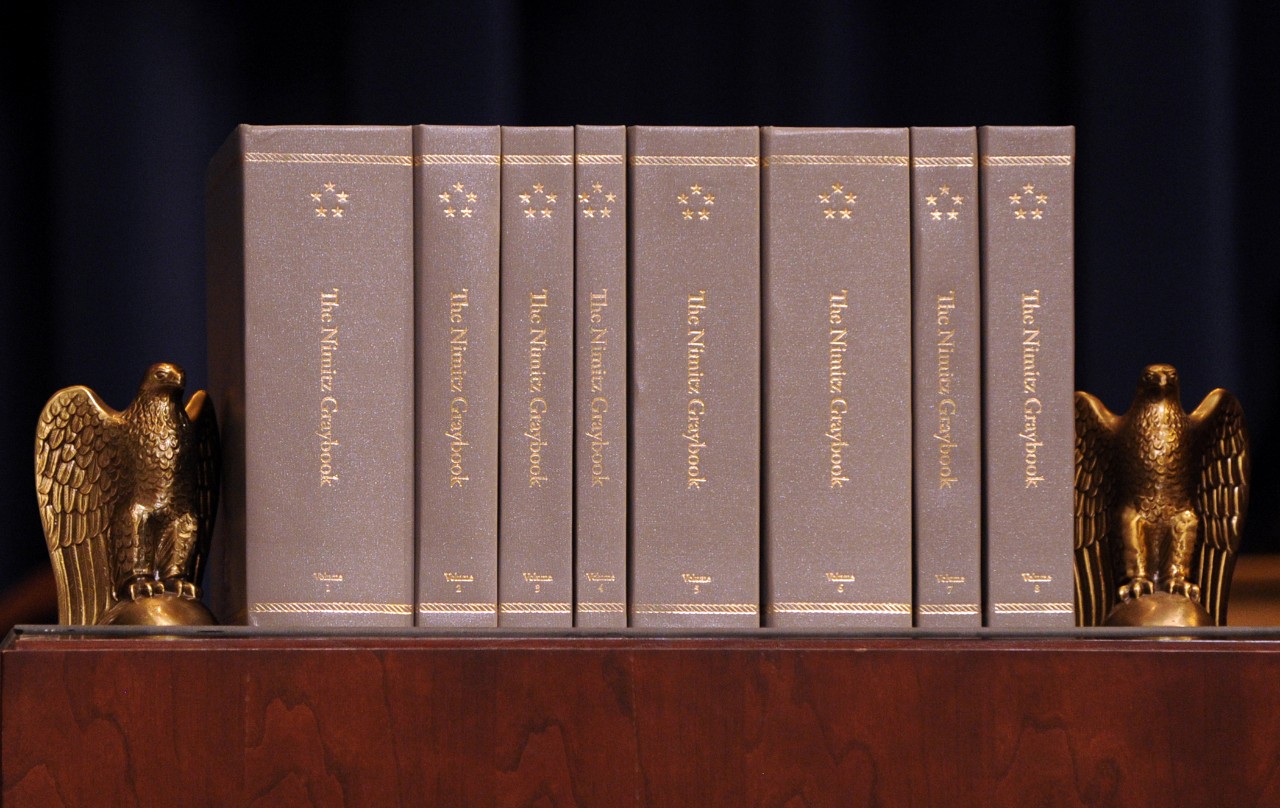 Covering activities and correspondence of the Pacific Command from Dec. 7, 1941 to Aug. 31, 1945, the Graybook is a historical record of operations and planning in the Pacific during World War II and serves as a window into Nimitz's decision making process during the war.

"We can trace the planning process, a lot of which was pioneered here at the Naval War College, for large-scale operations and watch the war unfold almost as if we were in the room," said Craig L. Symonds, U.S. Naval Academy professor emeritus of history, during the evening lecture.

According to Symonds, Nimitz proclaimed that 'the war-gaming experience and education he received here at NWC were central to his success in the Pacific war.'

"Chester Nimitz once declared that he never encountered an event in the entire war that had not been anticipated at some level during the war-gaming practices that they had here at the Naval War College, except the kamikaze," said Symonds.

Following the war, Nimitz's Graybook remained classified for 30 years and even after it was declassified in 1972, scholars had to travel great distances to what is now, the Naval History and Heritage Command (NHHC) at Washington Navy Yard, to access the document.

Following the events of 9/11, scholars not associated with the Department of Defense, now had to leap more barriers in security to access the source.

In 2009, thanks to the generosity of the American Naval Records Society, the Naval Order of the United States and the Naval War College Foundation, the Graybook contents were scanned so that a CD-ROM version became available.

"It was evident that a fully digitized version, the version we celebrate and welcome this evening, was far more desirable and essential," said Symonds.

During the evening lecture, held on the anniversary of Nimitz's 129th birthday, Symonds provided insight to the contents of the Graybook, and Nimitz's leadership and decision making process.

"Reading it pulls aside the curtain of history," said Symonds. "What do we see when we part aside that curtain?

"It becomes evident that one essential key to Allied and American success in the Pacific was Nimitz's personal role as a theater commander and in particular, his calm and even temperament."

"Behind those cool blue eyes was the calculating mind of a man who weighed the odds and made plans accordingly," said Symonds.

Following the Battle of Coral Sea and Doolittle Raid, Nimitz had lost two of his four carriers in the Pacific.

In May 1942, Nimitz learned from his code breaking team that the Japanese were planning an assault of Midway Atoll.

Nimitz was faced with a decision. Wait for repair of his carriers and preserve the only two carriers left in the Pacific, or lay a trap for the Japanese and risk the only thing standing between them and the west coast of the U.S.

"Was Midway, that outpost of coral and sand, worth risking the few carriers he had? Did Nimitz want to bet his career on an unlikely victory? Yes he did," said Symonds.

Nimitz believed he could repair the Yorktown quickly and use Midway's airstrip as an immobile fourth carrier that couldn't be sunk.

"Instead of being surprised by the Japanese as had happened at Pearl Harbor, Nimitz could surprise them and send some of their carriers, and as it turned out, all of their carriers to the bottom.

"It's hard today, aware of how this battle turned out, to appreciate what a bold decision that was. It seems like a gamble. But in Nimitz's mind, it was not a gamble. He did not throw the dice carelessly or thoughtlessly. Nimitz fully expected to win and of course he did, spectacularly.

"More than any other single individual, Chester Nimitz was the man who won the war in the Pacific for the Allies. Now, thanks to the public availability of the Graybook, we can see and understand how he did it," said Symonds.

The digitization of the collection is the product of collaboration between the NWC and NHHC, funded generously through the Naval War College Foundation.

"We see this as a pilot program," said Capt. Henry Hendrix, director of NHHC. "The method in which The Graybook was digitized and cross-referenced is going to give us a path forward in making documents together that are accessible to scholars and the American public."