Share
Connect
News
»
2014
»
NHHC Spotlight Morrand
NHHC Spotlight Morrand
What most of us see as a rock, Kate Morrand sees as a piece of history. In a container filled with water is what appears to be an oddly shaped rock. But Morrand, who serves as senior conservator and manager of the Naval History and Heritage Command's (NHHC) Archaeology & Conservation Laboratory, knows the object isn't a rock.
Location: 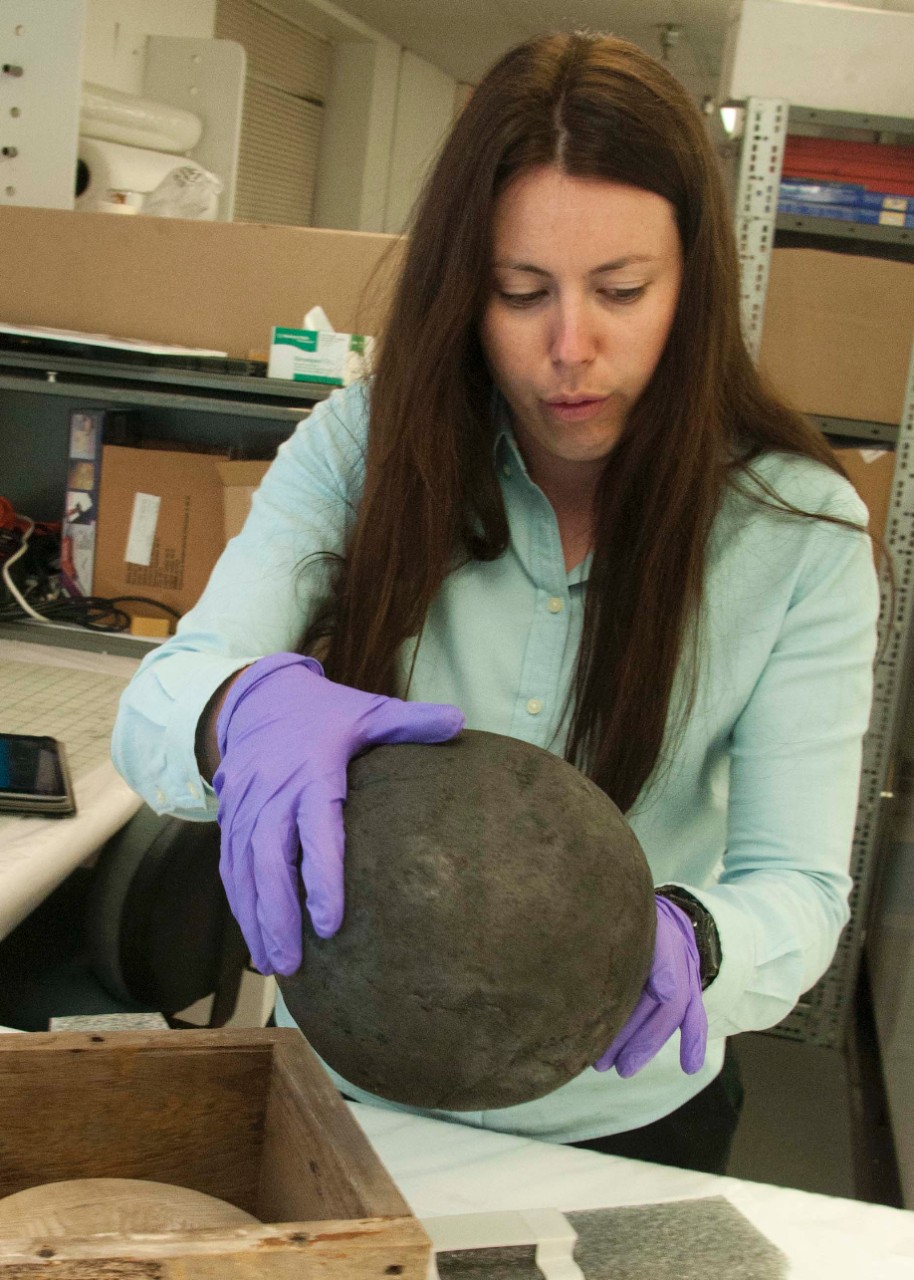 Caption: WASHINGTON (June 23, 2014) Kate Morrand, underwater archeology conservator at the Naval History and Heritage Command, removes an inert cannonball from a wooden box in which the artifact was found. The cannonball was one of more than 30 artifacts that the command received after conservation from the Clemson University Restoration Institute. (U.S. Navy photo by Mass Communication Specialist 1st Class Tim Comerford/Released)

WASHINGTON – What most of us see as a rock, Kate Morrand sees as a piece of history.

In a container filled with water is what appears to be an oddly shaped rock. But Morrand, who serves as senior conservator and manager of the Naval History and Heritage Command's (NHHC) Archaeology & Conservation Laboratory, knows the object isn't a rock. It's actually an artifact encased within a calcium carbonate material referred to as a concretion, which often forms around iron artifacts found on marine shipwreck sites. And within that concretion lies the barely-discernable remains of a pair of 18th century-era iron scissors recovered from the wreck of a late-eighteenth century wooden vessel in the Boca Chica Channel of the Florida Keys.

The concretion around the scissors is actually what is preserving what is left of the iron. X-rays have revealed that most of the metal has corroded away, but the concretion is essentially a perfect mold of the artifact and allows archaeologists to recover information.

Morrand pulls out another pair of scissors, found below the brackish water in Maryland’s Patuxent River, beneath six-feet of mud during the 2011 investigation of a War of 1812 shipwreck believed to be the flagship of the Chesapeake Flotilla, USS Scorpion.  The flotilla was scuttled in August 1814 to keep the ships from falling into British hands. The brackish water and nearly oxygen-free environment has kept this pair of surgical scissors free of the concretion that holds the other scissors captive.

Recovering these artifacts from U.S. Navy ship and aircraft wrecks in deep oceans, brackish rivers and fresh-water lakes, requires considerable time, resources and expertise. However, conservation is a vital component to any archaeological recovery to ensure the recovered artifacts are rendered stable enough to be researched, exhibited and appreciated.

And that's just down Morrand's alley. The NHHC Archaeology & Conservation Lab is filled with cabinets and containers that hold archaeological artifacts in different solutions and varying stages of treatment. As a conservator, her job is to document, research, treat and stabilize archaeological artifacts recovered from U.S. Navy sunken military craft for NHHC’s Underwater Archaeology Branch. Her work in the laboratory supports that mission by preserving the Navy’s irreplaceable cultural resources so they can be shared with the American public, and Sailors, past and present.

“There are over 2,500 artifacts curated at the Archaeology & Conservation Laboratory and while most have been scientifically recovered as part of archaeological investigations, many have come to us as the result of unsanctioned recovery,” Morrand said. “Without addressing the underlying needs of the materials, they can be permanently damaged and even destroyed.”

And that is exactly what happened with nearly 800 artifacts removed in the 1970s without permission from the wreck of USS Tulip, a steam ship that exploded Nov. 11, 1864, across from Ragged Point, Va., killing 49 of her 57 crew members. The artifacts were taken in the 70s and then stored without treatment before being returned to the Navy in the 1990s.

"We can render the artifacts stable, but we lose a lot of valuable archaeological data," Morrand said.

Treatment of different materials requires focus and more than a bit of knowledge about chemistry. And patience. Lots of patience.

One of Morrand's favorite pieces is a sextant from USS Tulip. Made of copper alloy, glass and wood, it created a complexity of challenges, including having to take it apart in order to treat each material separately.

"When you have a composite artifact made up of many different materials, the treatment for one material might be detrimental to another," Morrand said "The sextant was also a very precise scientific instrument and difficult to disassemble. So you have to get creative. By wrapping and securing the wood in the handle, for example, we could address the treatment of the metal without having to completely disassemble the artifact."

It took seven months to clean, conserve and stabilize, and it is now on display at NHHC.

NOT IN KANSAS ANYMORE

Problem solving, creativity and focus are just a few of the skills Morrand has found helpful in her career as a conservator. A Kansas girl through and through, Morrand's parents, Michael and Julie Morrand, still live in Kansas City, where Morrand graduated in 2002 from St. Thomas of Aquinas High School. Then it was on to the University of Kansas where she earned her bachelor's in fine arts in Art History and Fine Art in 2006, augmenting that degree with several science and chemistry classes.

And then Morrand broke free from her Kansas roots to live in France, taking a position teaching English at a French boarding school near Limoges.

It was while living in culture-infused Europe that Morrand learned about art conservation as a career.

"There is a great volume of cultural material in Europe and I was inspired by the great emphasis placed on preserving it," Morrand explained.

During that time, she was offered an apprenticeship with the Archaeological Superintendence of Tuscany, working in a conservation lab with underwater archeologists. She even wrote her thesis on the conservation of waterlogged material from shipwrecks.

It was a fortuitous choice. Not only did it marry up her love of art history, culture and even chemistry, but when an internship opened up at the NHHC Underwater Archeology Branch, Morrand was a perfect fit. When UAB sought contractors for the 2010 investigation of USS Scorpion, Morrand was a known entity and was hired. Three years later, she was a natural selection when a permanent position opened within the branch in October 2013.

While the sextant may always hold a special memory for Morrand, items as small as a metal button still have a personal connection for her.

"All of these artifacts, large and small, provide us with vital information that can help identify and interpret a site, answer research questions and give us a richer understanding of life aboard a U.S. Navy ship," she said.

The same goes for a crumpled trumpet, soaking in precisely customized solution. It was illegally removed from the watery grave of USS Houston, a World War II ship sunk by the Japanese during the Battle of Sunda Strait March 1, 1942. The trumpet was returned to the United States last year and Morrand's team has been trying to mitigate the damage done to the copper and steel on the body of the trumpet, its mother-of-pearl keys and felt stoppers.

"A sailor on Houston played that trumpet," she said, her purple-gloved fingers caressing the case that holds it. "I feel very lucky to be a part of the preservation of these artifacts and our hope is that they will continue to be preserved, studied and appreciated for generations.”