WASHINGTON (NNS) -- It was a simple pottery jar with cork in it. But when the team from the Underwater Archaeology Branch (UAB) of the Naval History and Heritage Command eased the cork out of it, the air that came out was nearly 200 years old, perhaps created by the organic material it had stored on the sloop-rigged floating battery Scorpion before it was scuttled Aug. 22, 1814.

Robert S. Neyland, Ph.D., director of the Underwater Archeology Branch (UAB) of the Naval History and Heritage Command (NHHC) in Washington, D.C., doesn't always get to work in such rarified air, but that was just one of many remarkable moments of his career in managing one of the lesser known, but widest-reaching organizations in the Navy.

The branch headquarters and laboratory are tucked away in the many historic buildings at the Washington Navy Yard. And just like the shipwrecks the branch monitors and manages, it takes a map and a little inside knowledge to find them. 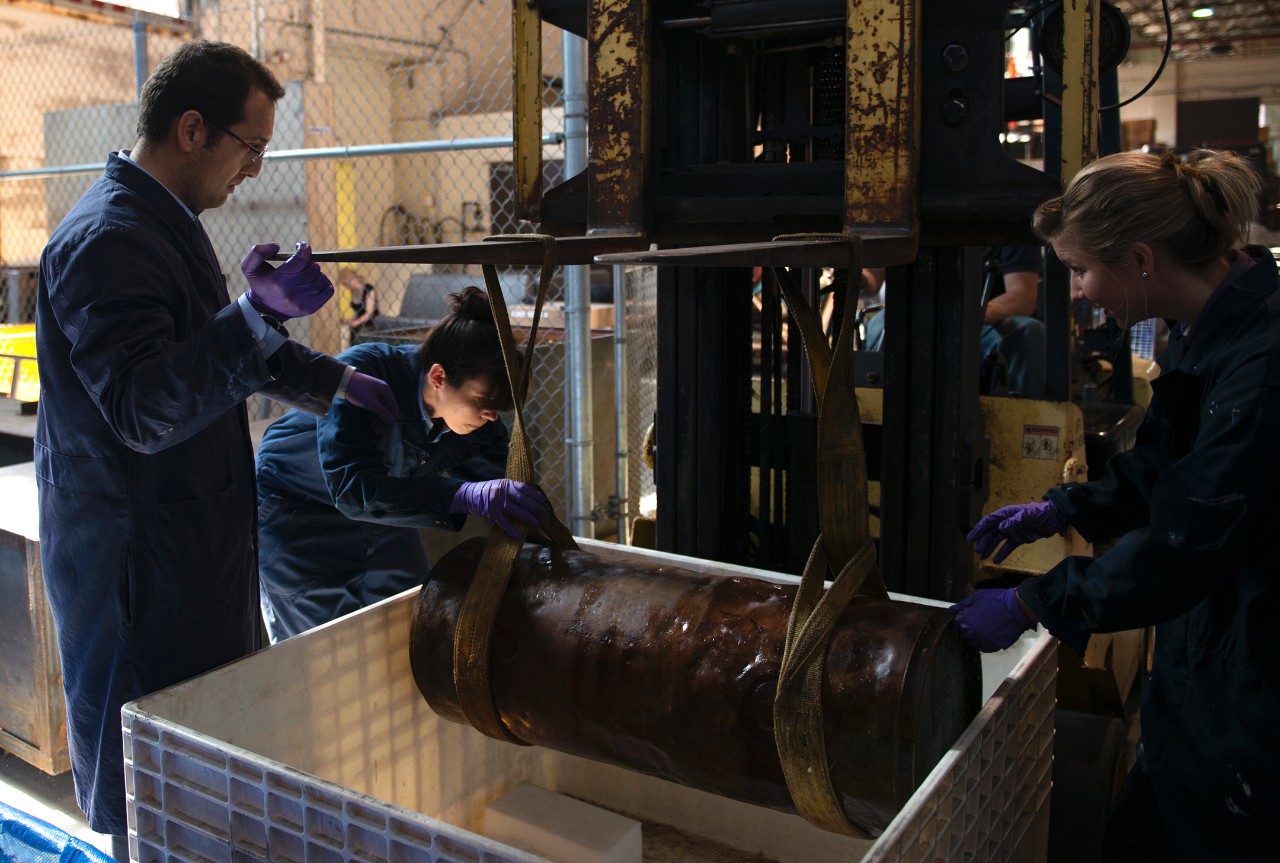 Caption: An archaeological team from NHHC prepares to store a section of a late 19th century Howell torpedo in a desalination bin.

But within its offices are the people who conserve and protect the more than 17,000 ship and aircraft wrecks around the world, its collection of more than 3,000 artifacts recovered from sunken military craft sites, and an artifact loan program of 6,000-plus items to national and international museums and other qualified facilities throughout the world.

The branch itself was created in 1993 through the Department of Defense Legacy Resource Management Program funds. Robert Neyland, Ph.D., followed soon after. Neyland, a native of Palestine, Texas, earned his doctorate and master's degrees in anthropology through the Department of Anthropology, Nautical Archaeology Program at Texas A&M, 1996 and 1994, respectively. He also holds another master's degree in public administration and planning from the University of Texas at Tyler and a bachelor's degree in wildlife science from Stephen F. Austin University.

So what did it take to get this Texas boy out of Texas? Mixing his love for diving with archaeology. He's traveled the world, diving some of the world's oldest shipwrecks. His scientific expertise and experience in management led him on assignment from Texas A&M to the Naval Historical Center in 1994 to assist the Navy in the development of policies and a program in underwater archaeology. The work was so intriguing he left Texas A&M to work at the branch as a federal government employee in 1996. 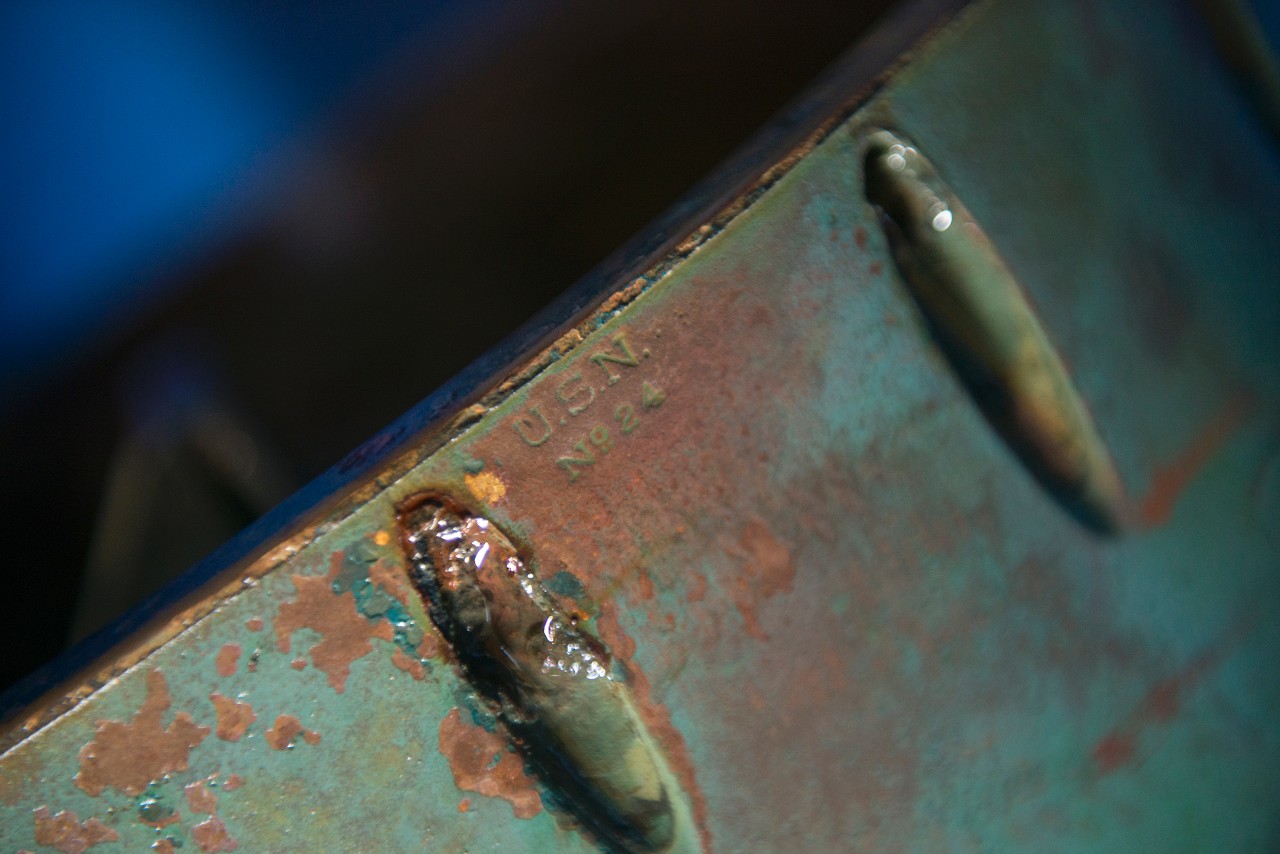 Caption: The letters "USN" appear near the edge of a section of a late 19th-century Howell torpedo.

While working as the Branch Head of the new Underwater Archaeology Branch, Neyland's unique experience led South Carolina officials to request the Navy to loan him to the State under the Intergovernmental Personnel Act (IPA) in 1998 to assist them with the archaeological recovery and documentation of the submarine H.L. Hunley discovered off the coast of South Carolina.

His Navy work has taken him to dives on Revolutionary War ships in Maine, surveys of WWII wrecks off the beaches of Normandy, France, and rare downed aircraft under the waves off the Marshall Islands. He's led the Navy archaeology team seeking the resting site of World War II submarine USS Pompano, which sank somewhere off the coast of Japan.

Diving for archaeology, however, isn't always in pristine recreational areas such as the waters of the Caribbean or Mediterranean Seas.

"The visibility for diving isn't that great in harbors and rivers," Neyland said. "But we dive where the wrecks are." 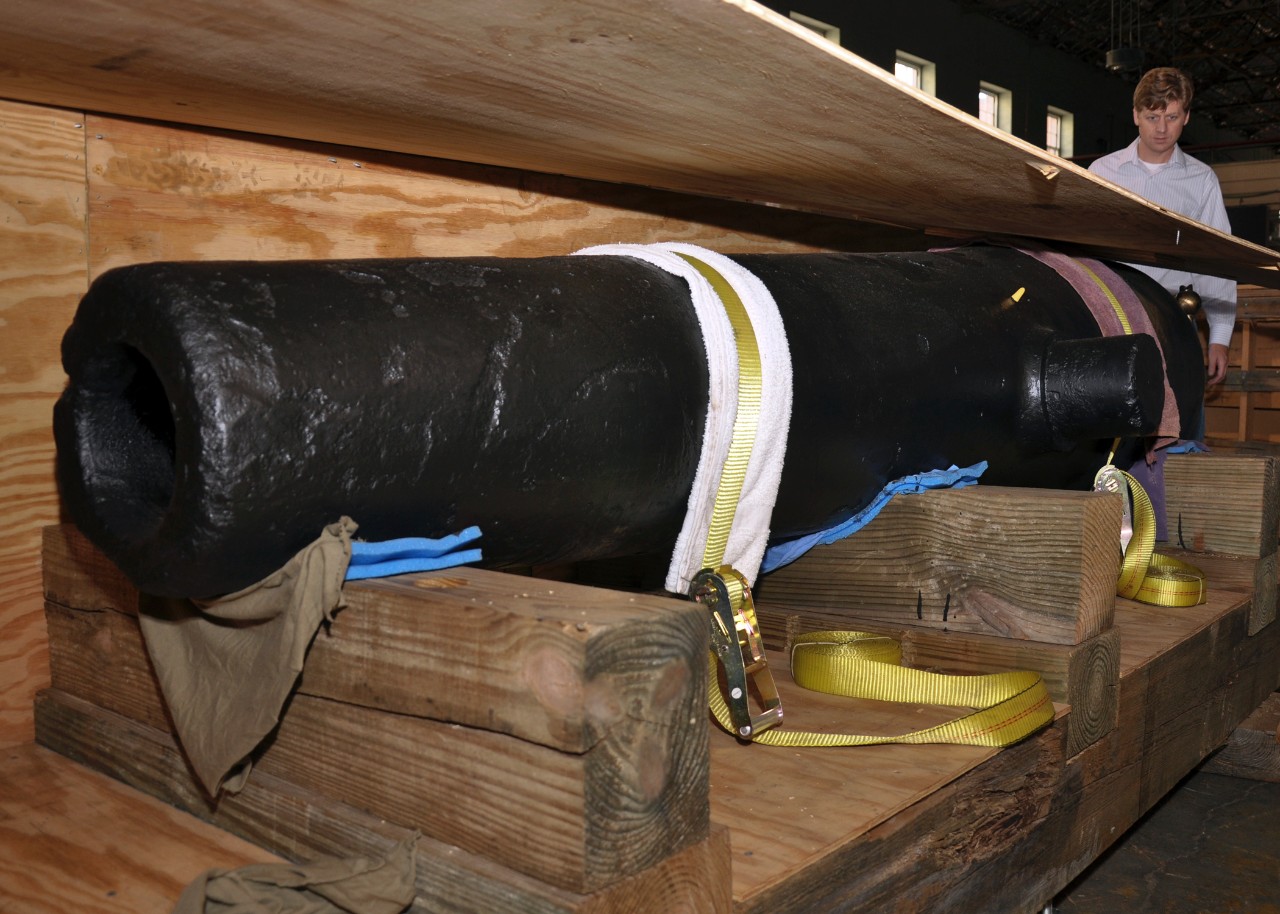 Caption: A 32-lb cannon recovered from the wreck of the Confederate sloop-of-war CSS Alabama is seen at the NHHC laboratory warehouse.

Diving into the murky waters of rivers can be as cloudy as navigating government regulation. That's why one of UAB's responsibilities includes arranging for permitting authority for the Department of the Navy under the 2004 Sunken Military Craft Act (SMCA).

The SMCA was enacted to protect sunken ship and aircraft wrecks which represent a collection of more than 17,000 fragile, non-renewable artifacts that often serve as war graves, safeguard state secrets, carry environmental and safety hazards such as oil and ordnance, and hold significant historical value.

The SMCA provides that U.S. government-owned military ships, aircraft and spacecraft remain the property of the government, no matter their condition, age or location. Still, Neyland said the law was written in the public interest to protect grave sites, and preserve the nation's and Navy's history, while at the same time providing non-intrusive access to wrecks for the diving public. The permitting process UAB manages even allows for excavation at the sites for archaeological, historical, or educational purposes.

"When there is an intentional violation of the act, the Navy can impose penalties, which is a unique responsibility within the Navy," Neyland said. "Many of these wrecks are the burial sites of U.S. military personnel and war graves. The Act applies equally to U.S. military ships lost today as it does to the earliest examples lost by the Continental Army and Navy during the American Revolution."

It's not a "finders-keepers" situation if divers recover artifacts from or around wreck sites. Just recently, a trumpet taken from the site of USS Houston was returned to the Navy, but had suffered degradation after its removal from the marine environment and exposure to the atmospheric oxygen. The UAB archaeology and conservation laboratory is working to mitigate that damage now. USS Houston sank in the Java Sea after intense fire from the Japanese fleet during the Battle of Sunda Strait Feb. 28, 1942. 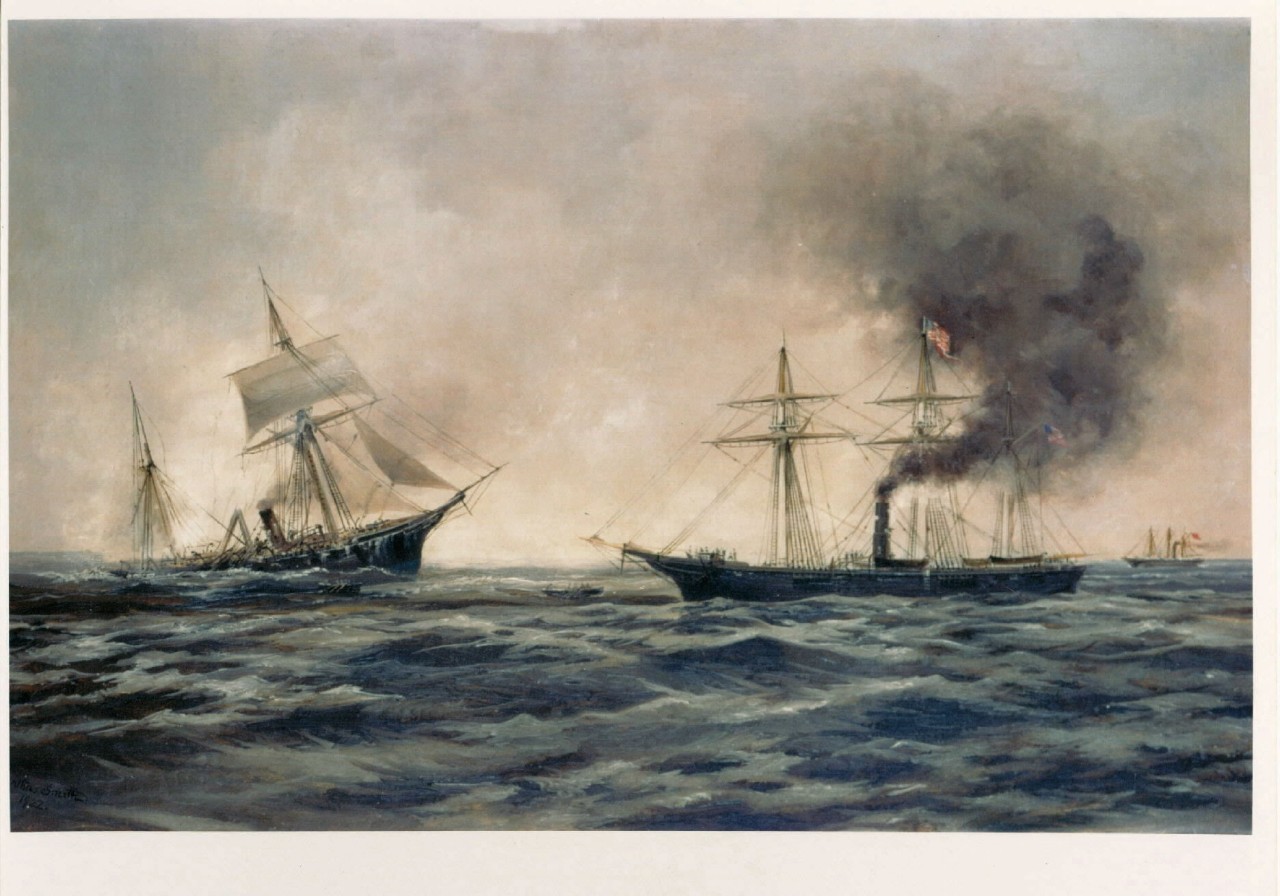 Caption: This piece of art was painted by the 20th Century artist Xanthus Smith.

Neyland said there is a fair expectation by the public that the Navy will look after theses wrecks as archeological sites and as war graves.

"Laws and ethics do not keep up with the advances in technology that allow for deeper dives and locating wrecks and the Navy's wrecks are no longer protected by immersion in the marine environment," Neyland said. "In many ways, these are like undiscovered islands, but which are already titled as U.S. property and are distributed worldwide."

But with those remains may also lay environmental issues still buried with the wreck, such as oil, ordnance and weapon systems better left to experts rather than civilian divers. The UAB works with numerous other Navy commands to recover or protect Navy artifacts, like the Explosive Ordnance Disposal (EOD) units, Seabees, Judge Advocate General Corps and Naval Criminal Investigative Service.

But the branch is also often the starting point for outside organizations, such as the National Oceanic and Atmospheric Administration, Environmental Protection Agency, U.S. Army Corps of Engineers, cities and states, plus a slew of foreign navies and their governmental agencies. They work with veterans associations and universities.

When fragments from a human jawbone were found embedded in the concreted outer layer covering a 32-pound cannon recovered from CSS Alabama, UAB worked with forensic scientists from the Department of Defense Central Identification Laboratory to recover information such as the age range of the deceased and determined that the individual was probably a European sailor serving on the ship. This complements the historical records which reveal that while the officers were Southern Confederates, most of the crew were European.

The mission of UAB is unique, and so are the professional opportunities it offers. The department has a robust intern program, now offering 13 internships a year through colleges, universities, and fellowships, including the Naval Research Laboratory, Naval Research Enterprise Internship Program (NREIP), National Research Center and the STEM Program (Science, Technology, Engineering and Math).

"This is quite the place for internships," Neyland said. "Out of 300 applications for summer internships, 39 specifically asked to work here."

Having such a strong intern program - they have had 57 so far -- is one way to keep the department thriving as it trains the next generation archaeologists, conservators, scientists, engineers, and policy makers. Neyland encourages the students to push for longer internships, at least through an entire semester.

"It provides valuable work experience to the interns, exposure to career choices, and provides useful service to the Navy," Neyland said.

One of those who turned that internship into a career is Kate Morrand, head of UAB's Archaeology and Conservation Laboratory. In 2008, she had just moved to the Washington, D.C., area after earning a post-baccalaureate degree in Conservation of Fine Art and Archaeological Material from Studio Art Centers International, Florence, Italy.

"This opportunity as an intern was different than others I've had," Morrand said. "You're very much treated like entry-level employees, using our particular skill sets that were hand-picked from applications."

And it didn't matter what the interns were doing, they felt they valued as part of the team.

"Your work matters, whether it is researching documents, answering questions, or writing policy to see if it is relevant to the site we are working," Morrand said. "In some places, the opportunity to do conservation as an intern is not always allowed right away. But since most of the interns already have advanced degrees or have worked with the materials, they (UAB) had the confidence to let us work on the collection."

PRESERVING THE PAST HELPS NAVY TODAY

While the time and effort to preserve a pair of 18th century iron scissors from the effects of concretion might seem a luxury during a time of tight budgets, the lessons learned from conservation may be used to mitigate corrosion and deterioration on future ships and aircraft.

"Research on how to better preserve the hulls of USS Monitor and H.L. Hunley may also be used for modern materials, including those used by the Department of Defense," Neyland said.

Already, their research has helped determine the impacts of explosions on ships and submarines. Improved technologies in diving may also be used in the military, salvage and engineering disciplines, such as allowing Navy divers to see in zero visibility and uses for underwater remotely operated vehicles and sensor packages. The technology used for logging and mapping out wrecks may be used to provide predictive modeling for oceanography.

"Underwater archaeology is dependent on advances in technology but it also pushes the science and technology forward with the research questions it asks, and its multi-disciplinary solutions can have benefits to the military and private sectors," Neyland said.

The UAB has no shortage of projects. They continue artifact recovery from well-known shipwreck sites, such as CSS Alabama, CSS Georgia in the Savannah River, and searching for the wreck site of the submarine USS Pompano that sank with all of her crew off the coast of Japan in September 1943.

Conservation work continues on the Howell torpedo found July 2013 after being alerted by two Navy-trained dolphins of something buried on the ocean bottom in San Diego.

This summer, Alexis Catsambis, Ph.D., UAB archeologist, will hunt for the wreck of the Bonhomme Richard off Flamborough Head near Yorkshire, England. The Continental Navy warship, commanded by the legendary John Paul Jones, was shattered during the ship's 4-hour battle with HMS Serapis Sept. 23, 1779. Despite his sinking ship, Jones refused to surrender to Serapis' commanding officer with his infamous: "Sir, I have not yet begun to fight!" After Jones took command of the captured British ship, the Bonhomme Richard sank Sept. 27, 1779.

And as for that 1814 air from that pottery jar from USS Scorpion, remnants were captured and stored for future examination into what that jar might have held as part of the Chesapeake Bay Flotilla sunk in the Patuxent River during the War of 1812.

"These military wrecks are also a means of interpreting the history of the services. Other benefits to DoD also include public education, particularly as awareness pertains to the history and mission of the services and the role the military plays in the past, present and future in protecting the country," Neyland said. "Discovery of a military wreck -- in the case of the missing-in-actions, the resolution for family members -- captures the public's imagination and raises that awareness. This occurs in the normal process of complying with our management mandate." 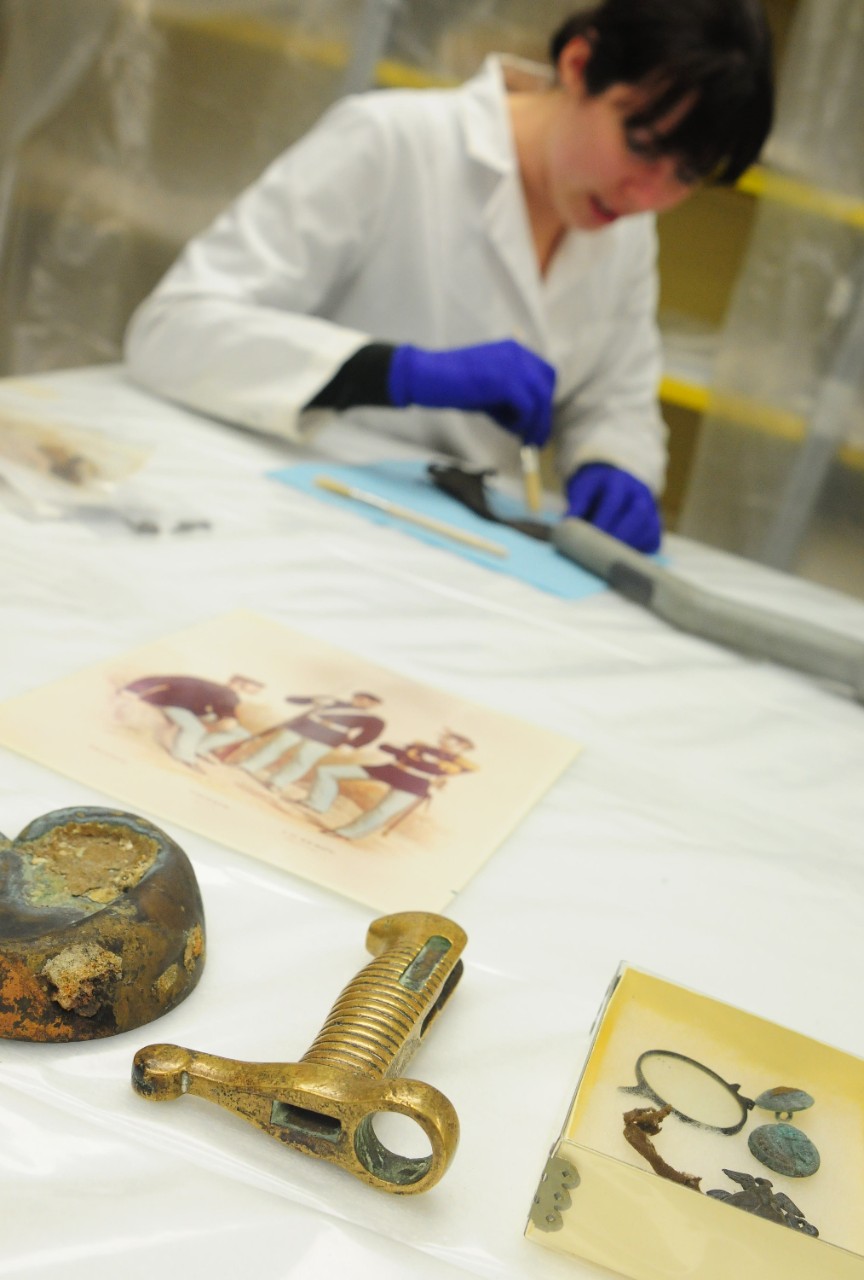