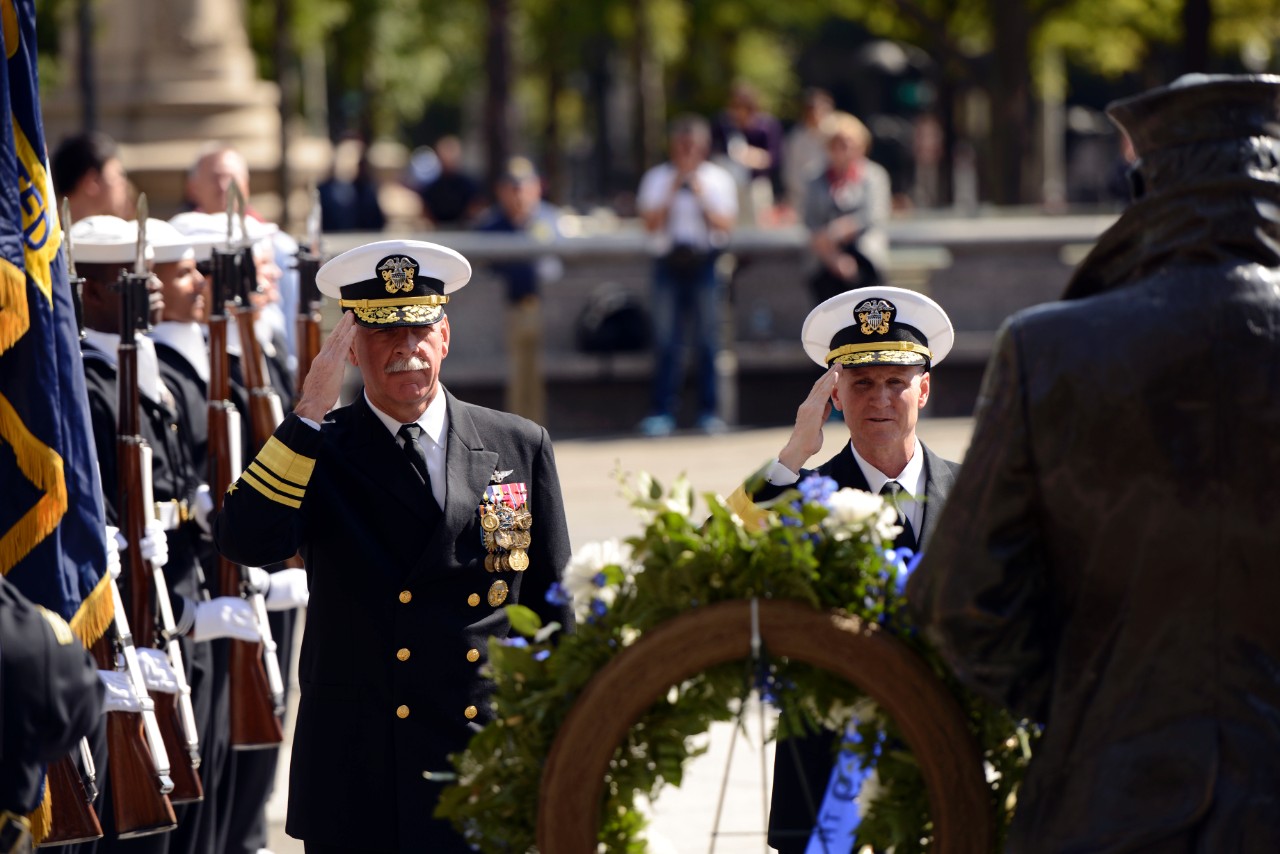 WASHINGTON (NNS) -- The Navy celebrated its 239th birthday with a wreath
laying ceremony at the U.S. Navy Memorial Oct. 9.

Vice Adm. Scott H. Swift, director, Navy Staff, was the guest speaker and addressed a crowd circled around the "Granite Sea", a map of the world that
serves as the Navy memorial centerpiece.

Swift spoke of historic achievements that led to the Navy's formation and growth. He mentioned his father's service aboard the heavy cruiser USS New Orleans (CA-32) and his participation in the Battle of Leyte Gulf, the largest Naval combat engagement in history.

"His service in the Pacific during the second World War, while individually his, was also collectively reflected of the competence, heroism and bravery the United States Navy exemplified these in many other battles and amphibious landing operations throughout the Atlantic, the Pacific and the Mediterranean theatres," said Swift.

Swift joined Rear Adm. Mark K. Rich, the 88th Commandant of Naval District Washington, who placed the wreath by the Lone Sailor statue in remembrance of the Sailors who gave their lives for their county and silently remain on watch.

"The times may have changed," Swift said. "The threats may have evolved and the complex nature of 21st century life may make the demand for such a presence (i.e. World War II) less obvious. But now more than ever, the Navy is something to be aware of, something to be thankful for, something to be proud of, whether you wear the cloth of our nation in the form of a Sailors uniform or admire the service of those that do."

Guests were invited to the Naval Heritage Center for cake and refreshments after the ceremony.

The U.S. Navy traces its origins to the Continental Navy, which was established on Oct. 13, 1775 when Continental Congress authorized the dispatch of two armed ships to search for munitions ships supplying the British Army in America. Following the Revolution, the ratification of the Constitution of the United States in 1787 empowered Congress "to provide and maintain a Navy."

The United States Navy Memorial provides a living tribute to Navy people and a place for them to gather and celebrate their service. The outdoor plaza features a "Granite Sea" map of the world, towering masts with signal flags, fountain pools and waterfalls and The Lone SailorC statue. Adjacent to the plaza is the Naval Heritage Center, where visitors can find educational displays about the contributions of the men and women of the Sea Services. The Navy Log, the online place for Navy people to stay connected with each other, celebrate their service and preserve the memories of their service is also a place where Navy veterans can build a record of their service online.