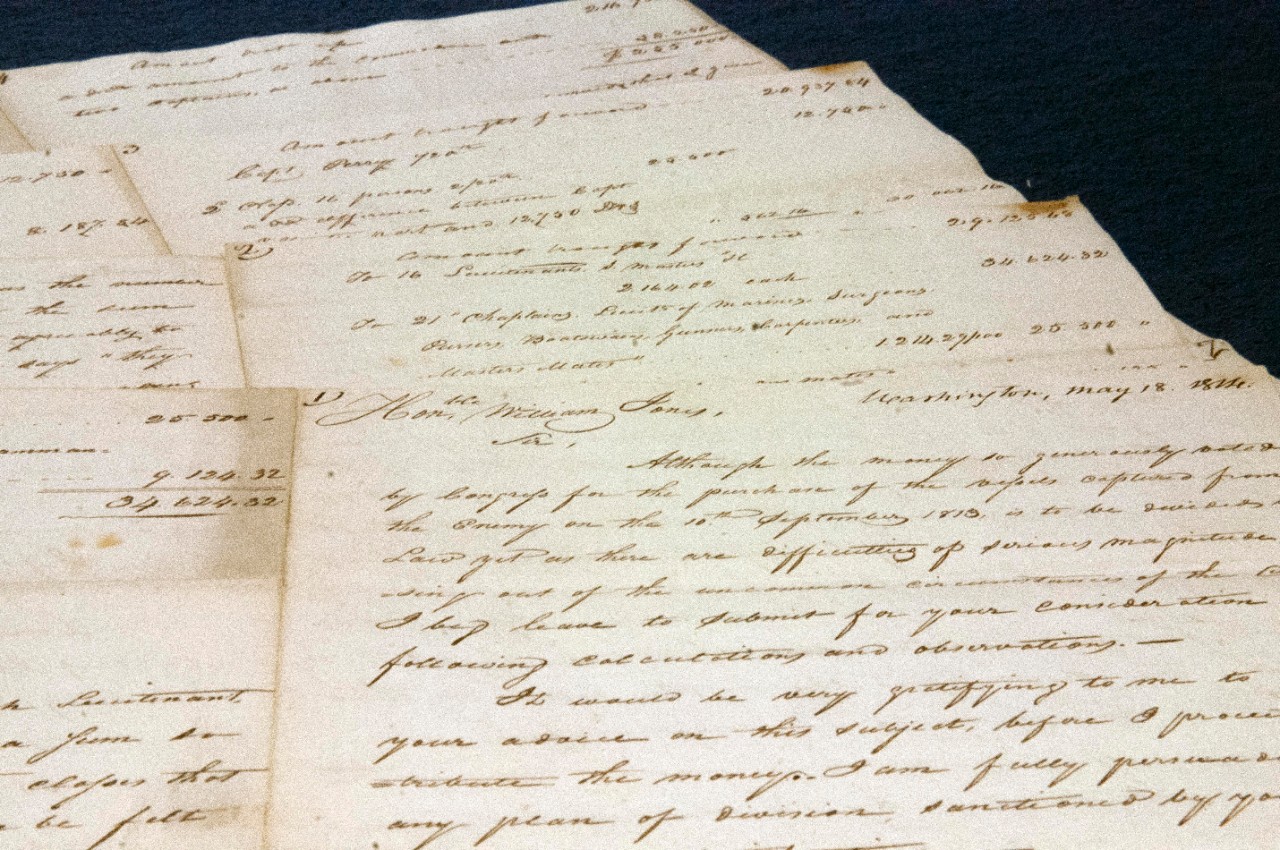 Caption: Four pages of a message drafted in May 1814 sent from Commodore Oliver Hazard Perry to Secretary of the Navy William Jones detailing cargo and items seized from British ships during the Battle of Lake Erie, Sept. 10, 1813, lay on an archival table inside the Navy Department Library's rare book room. The Battle of Lake Erie was one of the pivotal points of the War of 1812, with the United States trying to invade parts of Canada to use as a bargaining chip against the British in order to gain Sailor's rights and Free Trade. (U.S. Navy photo by Mass Communication Specialist 1st Class Tim Comerford/Released)

WASHINGTON (NNS) -- As part of ongoing efforts to improve its facilities in order to safely and securely house its expansive collections of books, manuscripts, records, artifacts, and art, the Naval History and Heritage Command unveiled the Navy Department Library's newly renovated Rare Book Room on July 7.

The room, which underwent an upgrade to install a waterless fire suppression system, holds many of the Library's unique or rare books and manuscripts.

"It contains extremely rare and, in many cases, unique books and documents of a naval nature. You can see documents captured on U-505, a log book from a Royal Navy warship captured in the American Revolution, John Paul Jones' calling card collection from when he was with the Russian Navy ..." explained Glenn Helm, director of the Navy Department Library.

"For the first time in the history of the Navy Department Library, which was founded in 1800, our first line of defense against a fire is no longer water," Helm said. "Water pouring down on a collection of paper, essentially ruins the collection. The first line of defense is a non-flammable gas to suppress the fire, which can even penetrate inside archival boxes to put out sparks and embers."

The system, probably the first of its kind installed in a Navy library, uses Heptafluoropropane HFC-227 gas to suppress fires inside the room. A water sprinkler system will still be active if the non-aqueous system fails to stop a blaze.

"If there is major flare-up or the system is not recharged shortly after a fire and there is another fire, then water would come raining down," Helm said.

During the process of renovation and installation, many of the Library's rare holdings had to be moved. The Library staff is delighted to have the collection back in the protected space where they can be shared with researchers.

And that means coming to the Library. In fact, a good portion of the collection is unique and most of the Library's holdings are only in hardcopy, though digitization of Library holdings is a constant and ongoing process.

"We have been able to arrange for escorts to the library, when it's needed," Helm said.

Helm believes the trip is well worth it.

"We have the certificate signed by Juan Peron appointing Nimitz a member of the Order of the Liberator - where else would you find that?" Helm said.

He pointed out that the job is more than just a paycheck for him and Knechtmann.

"As professionals, it is an honor for us to take care of the collection and an obligation for us to make this place better than when we first started," Helm said.

For a partial listing of the Navy Department Library's rare holdings click here and look under the Special and Rare Collections. 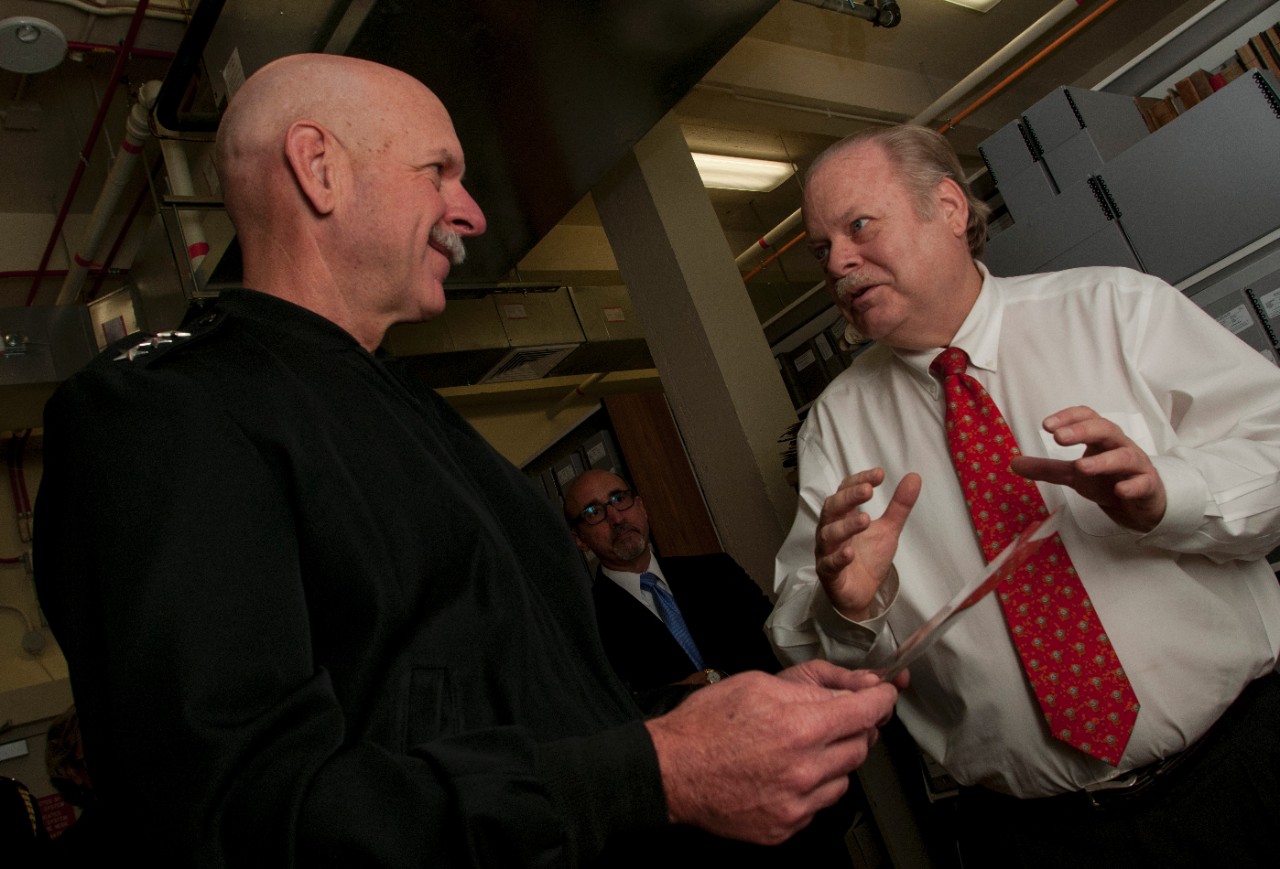 Caption: Glenn Helm, director of the Navy Department Library at the Naval History and Heritage Command, discusses a one-of-a-kind holding in the Library's rare book room with Vice Adm. Scott H. Swift, director of Navy staff. Swift spoke at an all-hands call at the command, toured the National Museum of the U.S. Navy, and observed the progress of renovations being made around the command facilities. (U.S. Navy photo by Mass Communication Specialist 2nd Class Eric Lockwood/Released)