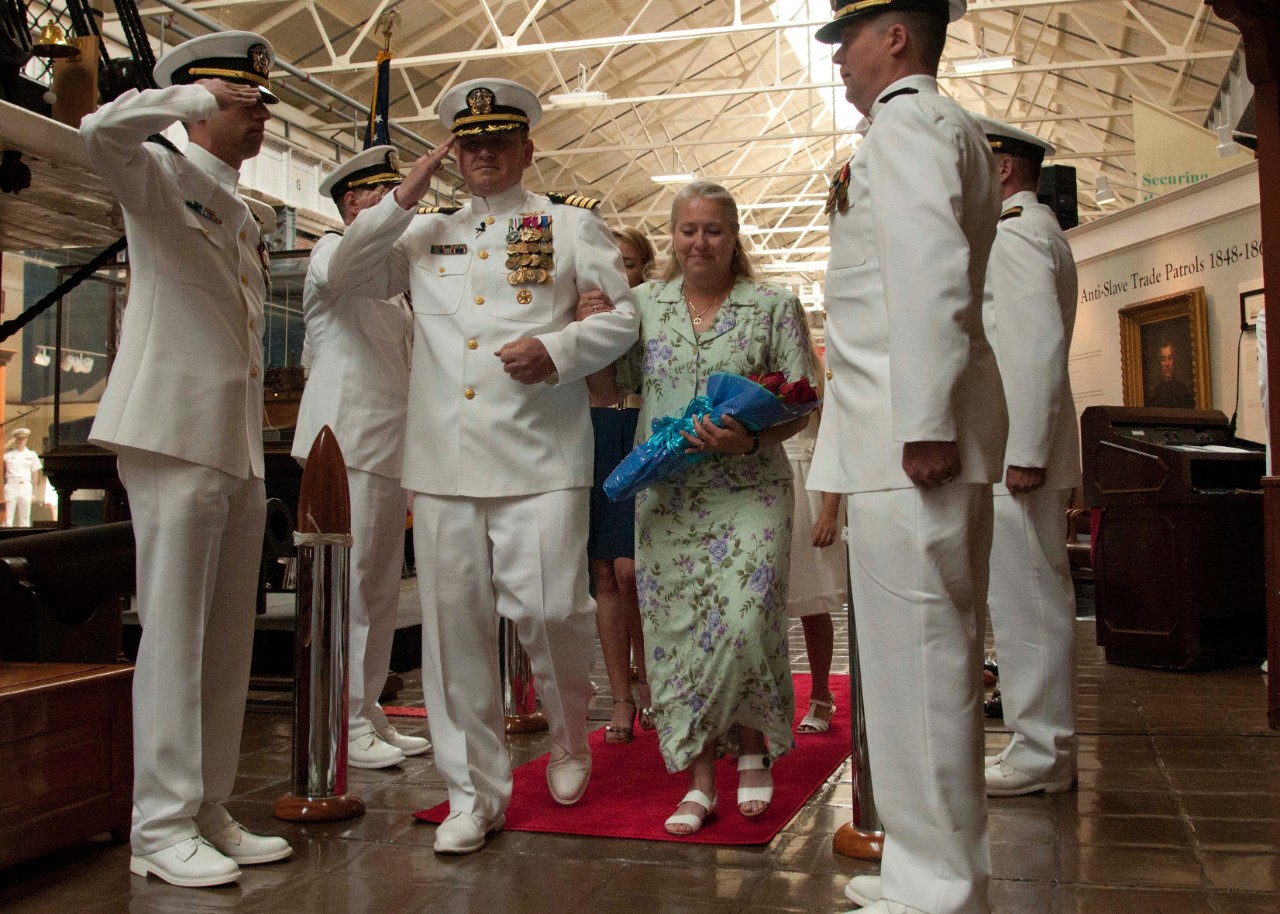 Caption: WASHINGTON (June 27, 2014) Capt. Henry J. Hendrix, Ph.D., Director of Naval History and Heritage Command, his wife, Penny, pass through a line of sideboys as he leaves Naval service at the end of his retirement ceremony at the National Museum of the U.S. Navy at the Washington Navy Yard. Hendrix assumed leadership in the wake of a 2011 Inspector General investigation that found the Navy's historical and heritage holdings "at risk." Hendrix led the stabilization and systematic improvement of the command's infrastructure and processes. (U.S. Navy photo by Mass Communication Specialist 1st Class Tim Comerford/Released)

WASHINGTON (NNS) -- The Naval History and Heritage Command (NHHC) began a new chapter, June 27, as its director of two years retired during a ceremony at the Washington Navy Yard.

Capt. Henry J. Hendrix, Ph.D., was assigned as NHHC's director in the wake of a Navy Inspector General investigation in 2011 that revealed its archives, artifacts, art and other historic holdings were at high risk or, in some cases, already deteriorating under substandard conditions and care.

Deputy Secretary of Defense Bob Work, the ceremony's guest speaker, was the Under Secretary of the Navy (SECNAV) in 2011 and knew Hendrix who was serving on the SECNAV staff.

"I was always impressed by his passion for maritime history, and his ideas and vision on how the Navy needed to never lose focus on its heritage." said Work, who recommended Hendrix for the position of NHHC director.

"I knew there was nobody better suited to come over to NHHC because of the way he approached problems. Thankfully, for the Navy and for our country's rich maritime heritage, he took the job," said Work. "Under Jerry's direction, the Naval History and Heritage Command dramatically improved the condition and the awareness of the Navy's historical artifacts and heritage, all while advancing historical scholarship in the Navy, and public outreach."

During his remarks, Hendrix discussed the challenges the command faced and the progress that has been made.

"The record is clear that the staff of the Naval History and Heritage Command and its predecessor organization had been working for years under difficult conditions to promote our history and preserve our art and artifacts, but had lacked resources to properly do so," said Hendrix. "I am proud to have added my talent to yours and achieved some modicum of success. Although we are far from healthy yet, we still have a long way to go."

Still, the Navy recognizes the work done so far and appreciation for that effort was illustrated for those attending the ceremony, when Director of the Navy Staff Vice Adm. Scott Swift formally presented the command with the Meritorious Unit Commendation (MUC). Signed by the Chief of Naval Operations, Adm. Jonathan Greenert, the award citation recognizes the meritorious service of the people assigned to the headquarters staff and its nine museums from December 2011 to January 2014 who "first stabilized and then systematically improved the Navy's historical and heritage assets that were in jeopardy in 2011."

Hendrix believes the MUC represents the dedication of the entire NHHC team and says he was proud to be a part of it.

"Theodore Roosevelt said great value is found in spending oneself in a worthy cause," said Hendrix. "Well this was a worthy cause and I thank all of you for laboring so hard to preserve and promote our Navy's history."

For Work, the progress made by the command is something he, as a historian himself, deeply appreciates.

"I want to express my personal gratitude and appreciation to Jerry Hendrix for everything he has done, for taking on this critical job, and for his professionalism and personal dedication which I think has really set NHHC on a great track," said Work. "And while I'm here, I also want to commend all the men and women who work at NHHC for the millions of man-hours of work behind these accomplishments. I'm just in awe of what you've done and what you will do."

Hendrix was careful in the planning of the ceremony to ensure it was used as an opportunity to celebrate the Navy family. For him that family begins with his family from Indiana who he thanked in his remarks for the profound impact they have had on his life.

He said the most important part of the family to him is his wife Penny and their daughters Michaela and Amanda.

"My daughters are a blessing to me," he said. "They made me want to be a better man, held me to a higher standard, taught me patience, delighted me, and distracted me from my concerns. To see them happy and achieve great things is better than any diploma or medal I have ever received and I am so proud of you both.

"And then there's Penny," he continued. "For 24 years you have always been at my side. Only you know what this day means to me -- torn as I am inside -- and only you can see me through this, for you are the most important part of my heart. Thank you for your service to our nation, and your support, sacrifice and love for me and our children."

The other important part of the Navy family, said Hendrix are the professional Sailors and Navy civilians he served with through his 26-year career.

After recognizing some of them he asked them all to stand and said, "Mom and Dad, you sent away one son; I show you many sons and daughters bonded by shared sacrifice. Daughters, you think me protective? Sometimes overprotective? Look around you, these were your protectors -- all of our protectors, stretching back to the dawn of the republic and their service continues to this day. It has been my high honor to serve among you, you have never been out of my mind, and I will love you forever."

For the last two years of his career, the focus of his service and of those with whom he has served has been investing in improvements to the processes and infrastructure of naval history. He admits there is much work to be done, but takes pride in that the command now has a strong foundation on which to build its future.

Progress made under Hendrix' leadership included:

* NHHC restructured its organization to better align form, fit and function. Today, the headquarters is made up of collection management, museum system operations, histories and archives, and communication and outreach divisions with special assistants for historic ships and aircraft maintenance, facilities, human capital and other support functions.

* Launched significant phased improvement projects to better house crucial holdings, including the naval archives. Although addressing the facilities and condition of the archives required their closing, beginning earlier this month a phased reopening began with the expectation the entire archive will once again be accessible later this fall.

* With the support from the Defense Logistics Agency, NHHC recently announced the consolidation of its collection of more than 300,000 artifacts from multiple locations into a single tailored facility located in Richmond, Va. which will offers a generational leap forward for the conservation, preservation, and management of NHHC holdings with proper environmental controls for high risk artifacts, appropriate shelving and storage, and an area for conserving and preserving the artifacts. The consolidation will take roughly 18 months to complete.

* With the objective of getting to baseline capability, the command's Histories Branch has been hiring additional historians and project managers, while leveraging contract vehicles to continue reducing existing backlogs of published documents.

* The command is hiring additional curators and conservators, while using additional contract support as needed to consolidate artifact storage, and reduce the backlog of artifacts requiring accessioning meanwhile the staff has properly accessioned 100% of newly acquired artifacts since 2011.

* Launched a program to assess the material condition and improve the safety of the more than 1,200 historic aircraft on loan around the world while providing essential staff support for ongoing maintenance and availabilities for USS Constitution and historic ship Nautilus.

* Inspired by the operating model of the Smithsonian Institution, the Museum System Operations division and the nine NHHC museums are hiring additional exhibit specialists and curators, implementing an annual museum action plan and Pursuing accreditation by American Alliance of Museums for all NHHC museums by 2020 (five of 10 are currently accredited).

* Aggressively sharing the story of the Navy and its rich history with a forward leaning communication approach incorporating outreach opportunities, social media, internal and external media engagements, book and information product publishing, and a pending top-to-bottom redesign of the command's antiquated web site all designed to raise awareness of the importance of naval history among the Navy and the nation's leaders, Sailors past and present and the American public.

Recruitment for Hendrix's replacement is nearly complete, and an announcement of a new NHHC director is expected soon.

Hendrix has not announced what he'll pursue next.

The Naval History and Heritage Command, located at the Washington Navy Yard, is responsible for the preservation, analysis, and dissemination of U.S. naval history and heritage. It provides the knowledge foundation for the Navy by maintaining historically relevant resources and products that reflect the Navy's unique and enduring contributions through the nation's history, and supports the Fleet by assisting with and delivering professional research, analysis, and interpretive services.