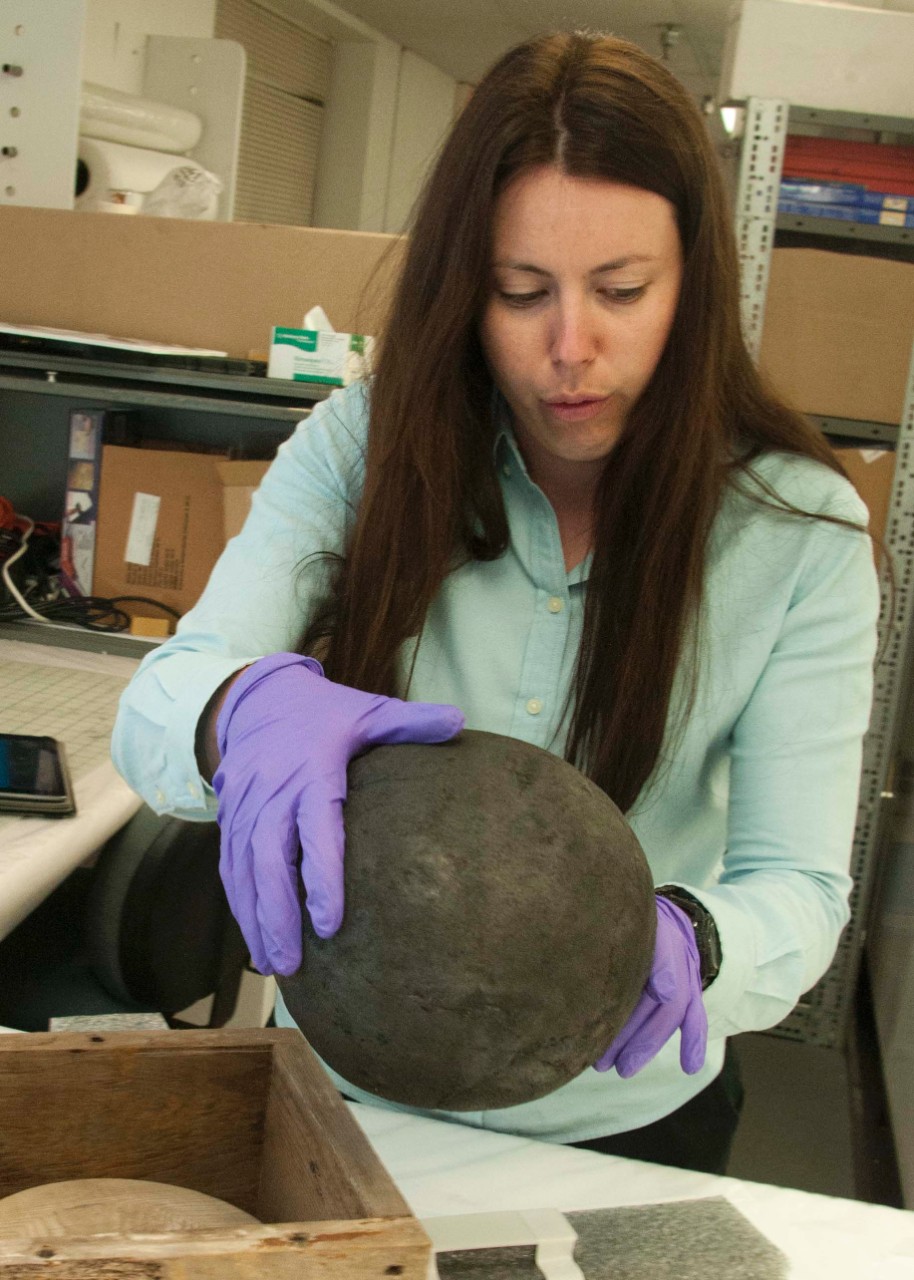 Caption: Kate Morrand, underwater archeology conservator at the Naval History and Heritage Command, removes an inert cannonball from a wooden box in which the artifact was found.

"It was recovered as one piece - the top actually lifts off and you still have the shell actually inside," said Kate Morrand, NHHC Underwater Archeology Conservator, of the wooden box containing the cannon ball. "It's a pretty complex piece and it has taken several years to treat it completely. They look the same as when they were recovered."

Experts do not know why the shells were placed inside the boxes.

"A lot of the research that we have done shows that ammunition that has been mass produced was usually all packed together," Morrand said. "But, for whatever reason, this one was on its own."

While these artifacts represent a large portion of the objects recovered, there are more.

"There are two or three more pieces that are still under treatment," Morrand explained. "But, the majority of the artifacts have been stabilized and are here on loan. We have several hundred pieces from that site alone."

These artifacts will help the scientists interpret the site of ship.

"First we are going to study them and how they relate to the ship, to each other and the rest of the collection. Then we are hoping to put them on display," Morrand said. "They are beautiful artifacts."

CSS Alabama, built by John Laird Sons and Company of Liverpool, England, was commissioned on August 24, 1862. Its mission was to wreak havoc on Union warships and Union-backed merchant ships, which it did for nearly two years.

On June 14, 1864, after 22 months of near-constant sailing, Alabama arrived in Cherbourg, France and requested permission to dock for a maintenance overhaul.

After hearing CSS Alabama was nearby, sloop-of-war USS Kearsarge, which had been pursuing the raider, headed to Cherbourg and a few days later, began patrolling just outside of the harbor. On June 19, still waiting for permission to dock for repairs, Alabama sailed out of Cherbourg to engage Kearsarge. Approximately one hour after firing the first shot, Alabama had been reduced to a sinking hulk.

The ship was rediscovered, 120 years after its loss, off the coast of Cherbourg by the French Navy and was later confirmed to be the CSS Alabama.

Since 1993, an American and French team of archaeologists have been at site of the sunken ship removing at-risk artifacts and studying the conditions of the ship.

For more information on the CSS Alabama and the UAB team visit http://www.history.navy.mil/branches/org12-1.htm .