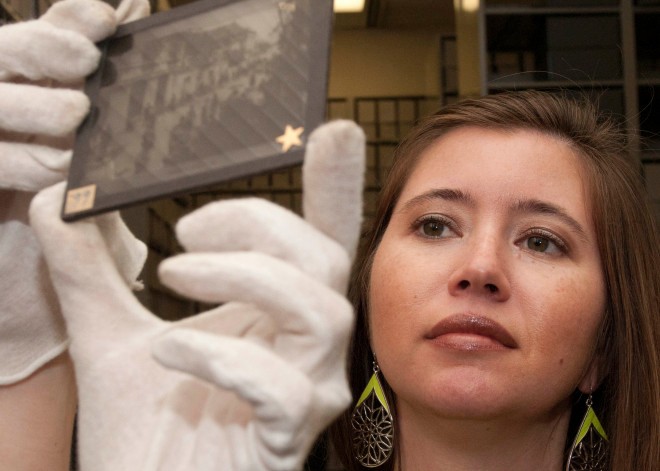 WASHINGTON (NNS) -- On the oldest Navy Base in the country sits one of the oldest buildings on that base. In that building, poring over photographs of people long dead and taken by people long dead, sits a woman looking at an aged photo of an old Navy ship with a hull number but no date.

She is trying to figure out what date the photo was taken. It's part of her job at Naval History and Heritage Command, the U.S. Navy's foremost authority on Navy artifacts, archives, history and curation, and she takes it seriously. Sometimes, figuring out why a photo was taken and getting an accurate description of what is in it, can take weeks.

Lisa Crunk, as lead archivist for NHHC's Photo Archive, regularly delves through century-old unmarked photographs, organizes a massive collection of possibly more than one million photographs, constantly scans them to keep up with the backlog and, yes, doing the sleuthing to find out where photos came from, who or what it is about.

"We were able to use other photographs of the ship with the dates, taken before and after to narrow down when the photo was taken," the San Diego native said of the photo. "We looked for changes that the ship underwent in terms of camouflage and its structure. From those photos we were able to give a date range for the photo."

All part of day's work for a photo archivist.

She graduated from Granite Hills High School in El Cajon, Calif., in 1996 and went on to San Diego State University for four semesters, then transferred to University of Nevada Las Vegas where she finished up her bachelor's degree.

"I changed my major many, many times," Crunk said and smiled. "I graduated with a degree in anthropology from UNLV, which really has no relation to my job whatsoever. Like many of the people who get their bachelor's, I got a job that had nothing to do with my field of study."

But it was part of her original plan.

"I was going to work in a museum, in collections management."

That led her to graduate school in Denver, Colorado.

"Really, you cannot get a job in the museum profession without a Master's Degree," She said. "For that I moved to Denver, and went to University of Colorado at Denver. I was getting a degree in Public History and Preservation. While I was there I had a job at the Denver Museum of Nature and Science. One of the departments I was working in was the archives. I had some background in working in an archive, because I had internships though my bachelor's program and master's program."

That is what changed her mind. She admits the job was not one she dreamed of as a child.

She changed her graduate program to gear it more toward becoming an archivist and her college training helped when it came to the job she ultimately chose.

"My master's degree definitely helped - part of my program included specific coursework in archives. I am a fully certified archivist - it is a special certification that I attained and tested for. It is not just doing research and not just describing photographs, there is an art to arrangement and an art to description. There is a way you have to arrange your materials - you have to know how a researcher is going to be looking for them, so you have to think like a researcher or a historian. My graduate school did prepare in part for a lot of that."

She was at the museum for more than three years. She then took a job nearer to her hometown at the Defense Language Institute Foreign Language Center (DLIFLC) at Monterey, Calif., then in Sept. 2012 she made the leap to the nation's capital.

"I was the lone archivist at DLIFLC for about three years," she said. "After that I came to Washington D.C., which is really the archives Mecca. There are more archival institutions in D.C. than probably every other city in the country. For an archivist, this is a great place to be because there is so much history here and so much material coming out of all of these organizations. You really get a chance to work with everything."

It also helps the job at NHHC offered her exactly what she wanted.

"I had worked with photographs collections before, but they had always been photographs in conjunction with documents," Crunk said. "This was the first opportunity to work with a collection that was strictly photographs - that was really exciting for me because that is my personal preference."

But her job is not without its challenges.

"We are in a historic building that was not designed to be an archive, it was not designed for artifact or photograph storage," she remarked. The room where she is in now is vastly different after remodeling. The ongoing remodeling is helping to make the three rooms they curate more orderly and photographs more accessible for the archivists and the public. Rows of filing cabinets almost bursting from the weight of photos have been replaced with shelves of archival quality boxes, labeled and numbered. It has made a huge difference and she is pleased.

"They are able to find what they are looking for more easily," she said. "That makes me happy, because that means we have cataloged it correctly and housed it correctly. In the course of the next six months everything in here will be completely different than when I arrived. It will have gone from paper-based searching methods to digital computer-based searching."

Her changes are not something that have gone unnoticed, her supervisor Daniel Jones, assistant deputy NHHC operational archives, is impressed with her work.

"Lisa's been an incredible asset to the Archives since she first reported on board," Jones said. "NHHC has been able to impose a semblance of order on our often-chaotic photo collection thanks in large part to Lisa's initiative, optimism, and drive. We've still got a long way to go before the Photo Section is brought up to professional archival standards, but Lisa's work, and the work of her staff, over the last year and a half has proven essential in laying the foundation for this progress."

She admits some parts of being an archivist are rote, but she finds her job as a photo archivist takes her away from that.

"I have done jobs where I just catalog for days, weeks, months straight and it just gets incredibly mundane after a while," Crunk explained. "You can only catalog for so many hours in a day - where you are just straight typing. Photographs are all different. They were taken by different people, they had different reasons for taking them and they meant something to someone. They took that photograph for a reason. The photos tell you a lot about the scene, but also the person who took the photograph."

She feels she and her two coworkers are blessed.

"I literally get to play with photos all day long, not many people get to say they get to do that in their job. Any time anyone comes here they say the same thing: 'You have the coolest job.' They are right," she said. "We are really lucky, all day long we scan photos and then try to make sense of it all for the public. It is a unique opportunity."

For more information on NHHC's photo archive visit the photographic section on the command's website at www.history.navy.mil/branches/nhcorg11.htm.


For more news from Naval History and Heritage Command, visitwww.navy.mil/local/navhist/.