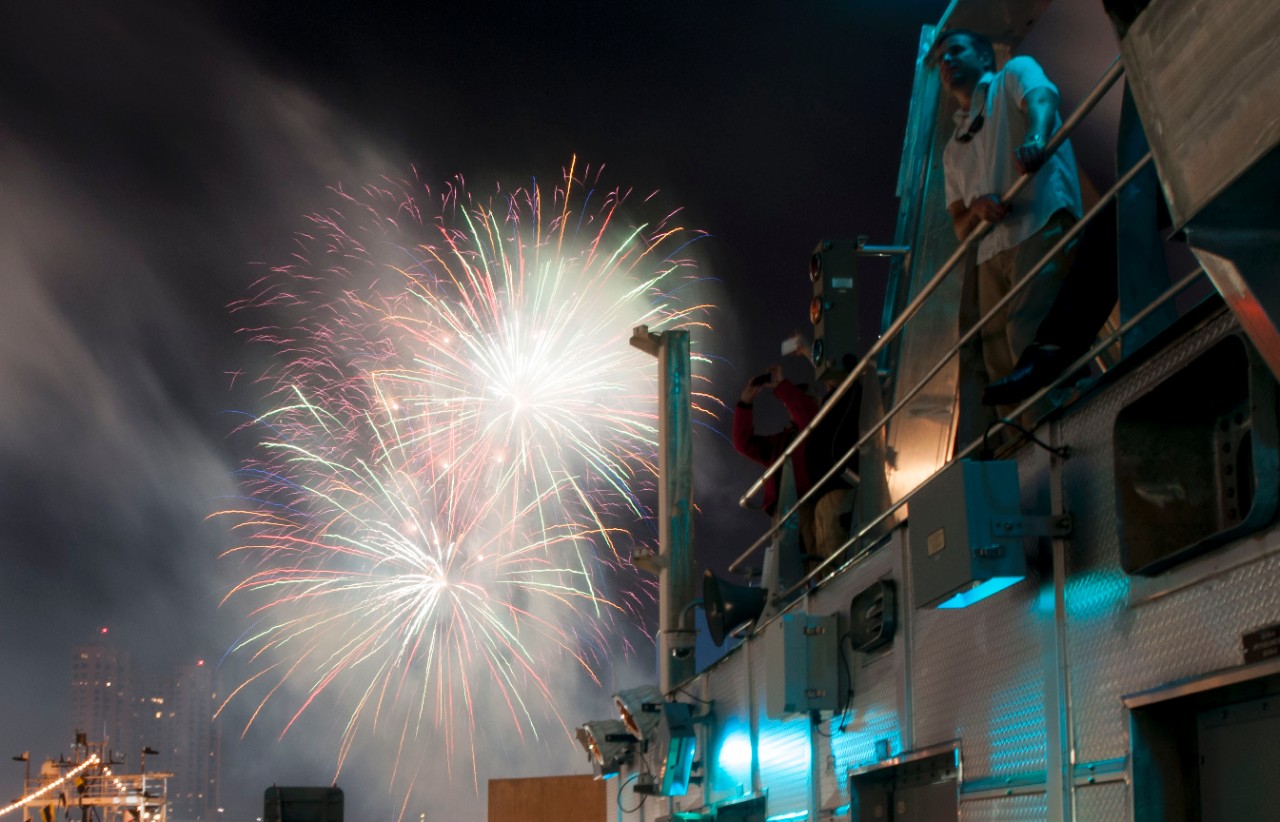 BALTIMORE (NNS) -- Baltimore's Star-Spangled Spectacular drew to a close, Sept. 15, as more than 2,000 Sailors, Marines and foreign military personnel departed the area after successful participation in a week-long series of events celebrating the 200th anniversary of our national anthem.

Highlighting the week was a special air show from the Navy's Flight Demonstration Team, the Blue Angels, over Fort McHenry and the Inner Harbor, as well as performances by the U.S. Navy Parachute Team, the Leap Frogs, at various locations around the city.

"It's a privilege to be a part of this event. We do a lot of Navy events across the country, but coming to out to Baltimore, it's such a gorgeous city and it's a lot of fun," said Navy SEAL Lt. Dan Gibson after jumping for students at Heritage High School and Reach! Partnership School. "The team has been looking forward to this trip all year."

Visitors also had the opportunity to view Navy divers inside the Atlantic Reef at the Baltimore National Aquarium and Navy Explosive Ordnance Disposal units demonstrating the capabilities of their Small Unmanned Ground Vehicles (SUG-V) to assess and conduct surveillance of suspected explosive devices.

"We are out here to inform people about what we do," said Explosive Ordnance Disposal Technician 2nd Class Jeffrey Gansmann, attached to EODMU 6. "Most people don't actually know what we do, so this is a great opportunity for us to show the public what exactly we are capable of. The kids' reactions to the SUG-V are just an added benefit to this job."

The public also had opportunities to visit and tour more than 30 naval vessels and tall ships from the United States, England, Canada, Norway, Germany, Spain and Turkey that berthed at the Inner Harbor, Fell's Point and North Locust Point.

Military members participated in living history demonstrations, such as the Defender's March at Patterson Park, the raising of a full-sized replica of the Star-Spangled Banner over Fort McHenry and attended special events at Camden Yards, Martin State Airport and other locations. The Naval History and Heritage Command (NHHC) hosted a booth at Ft. McHenry, where staff spoke with the public and distributed materials illustrating the importance of the War of 1812 and other moments in naval history. According to the command's branch head for outreach, more than 5,000 people visited the booth.

"We enjoyed speaking with so many people all over the world, including our Canadian and British allies; they were all very interested in the history of our Navy and proud of the accomplishments of our Sailors, as well as our support and friendship over the past two centuries," said Lydia Robertson, NHHC's Outreach branch head. "We look forward to participating in similar events in the future, sharing naval history and making it relevant to the people of the nation we serve."

Additionally, services members took time to give a little back to their host city by participating in community outreach projects with the American Legion, the Department of Parks and Recreation, Habitat for Humanity, Maryland Food Bank, and the National Blacks in Wax Museum.

"We have gotten a lot of support over the years from Maryland, and from Baltimore, specifically. We wanted a project that not only would be good for us, but also for the community," said Cmdr. Geoffry Patterson, commanding officer, USS Maryland (SSBN 738), who worked alongside performing minor landscaping for Habitat for Humanity's ReStore center.

The signature event's crescendo, the Star-Spangled Spectacular, included special guests such as President Barack Obama, Vice President Joe Biden, and Secretary of the Navy Ray Mabus, as well as two star-studded patriotic concerts and an extraordinary fireworks display over Fort McHenry and the Baltimore Harbor.

The week was an opportunity for citizens in Baltimore and the surrounding area to meet Sailors, Marines and Coast Guardsmen, and to see firsthand the latest capabilities of today's maritime services.