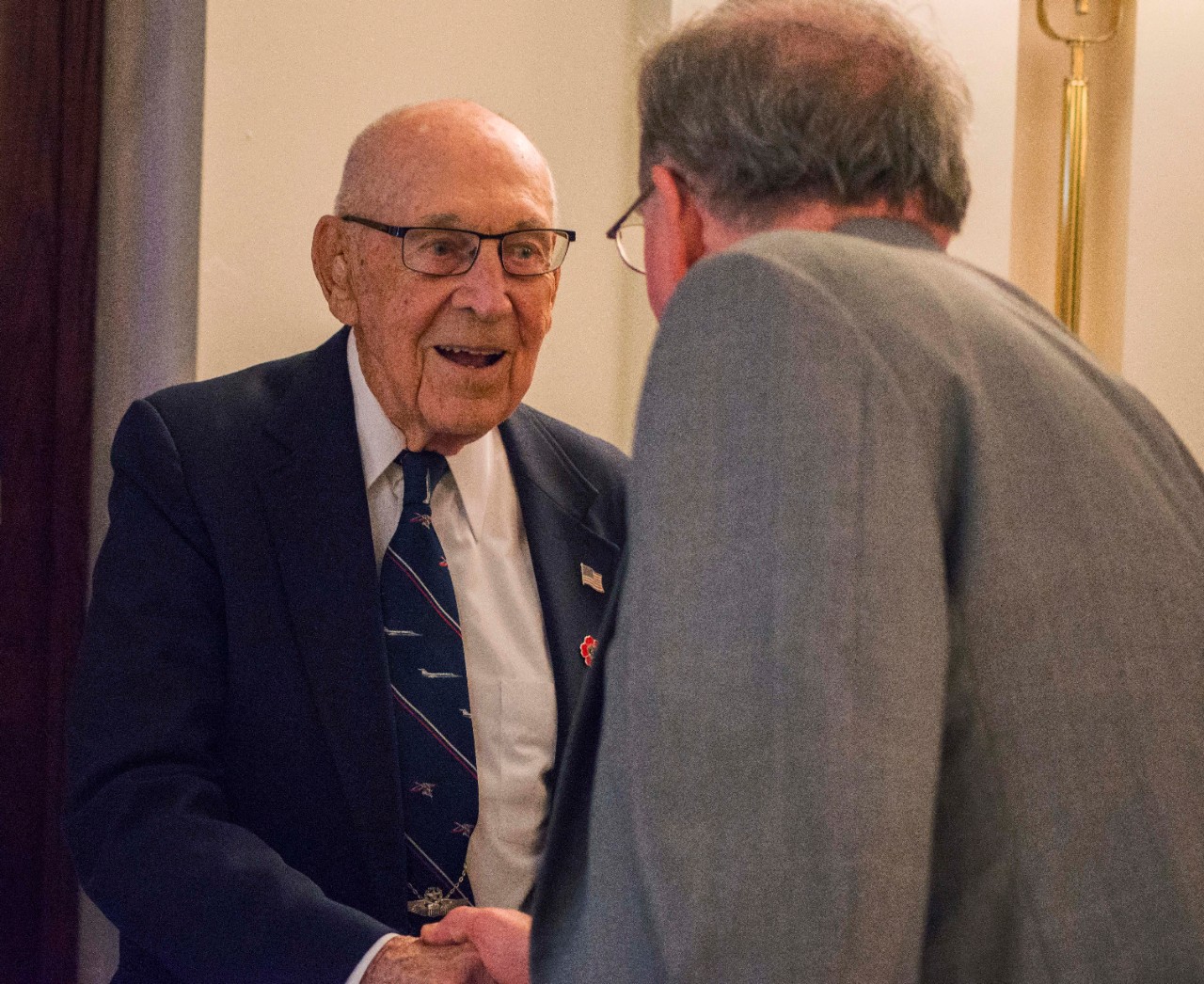 WASHINGTON (NNS) -- Two of the four surviving air crewmen of the "Doolittle Raid," Col. Dick Cole (USAF, Ret.) and Lt. Col. Edward Saylor (USAF, Ret.), attended a luncheon Nov. 7 celebrating the first offensive operation against the Japanese homeland when a raid of Army B-25s was launched from an aircraft carrier.

Naval History and Heritage Command (NHHC) joined the celebration at Washington D.C.'s Army-Navy Club sending Robert Cressman, NHHC historian and WWII expert, to speak with the raiders and audience members at the luncheon. The luncheon featured Cole's son giving a brief history of the raid and a question and answer session between the two "Doolittle Raiders" and the audience.

A chance observation that it was possible to launch Army twin-engine bombers from an aircraft carrier, was the seed of what would be called the "Doolittle Raid." The B-25B "Mitchell" medium bomber was selected as the delivery vehicle after research showed it could fly off a carrier with a useful bomb load and enough fuel to hit Japan and continue on to airfields in China.

The April 1942 air attack on Japan, launched from the aircraft carrier Hornet and led by Lt. Col. James H. Doolittle, was the most daring operation yet undertaken by the U.S. in the early days of the war in the Pacific. Conceived as a diversion that would also boost American and allied morale, the raid generated strategic benefits that far outweighed its limited tactical objectives.

The new carrier Hornet was sent to the Pacific to undertake the Navy's part of the mission. So secret was the operation that her Commanding Officer, Capt. Marc A. Mitscher, had no idea of his ship's upcoming employment until shortly before sixteen B-25s were loaded onto her flight deck.

Rich Cole, son of Dick Cole, retold a story of Saylor during the Doolittle Raider's time with Hornet. One of the engines on Saylor's plane wasn't working and if they couldn't get it running, the plane would have to be pushed over the side of the ship.

"Saylor decided he was going to take the engine off the aircraft, fix it and put it back on," Rich Cole told the audience. "They were in forty foot swells and anything you put on the deck was going to go over the side. He and the Navy guys that were helping him took the engine off and took it below, disassembling it completely. The Navy folks in the machine shop fixed the sprocket that was acting up. Saylor put it back together and put it on the aircraft. When he was asked whether he thought it would work, he uttered a phrase I don't think any man has ever uttered in the history of the world. 'Well, there weren't any parts left over.'"

Hornet was joined mid-ocean by Vice Adm. William F. Halsey's flagship Enterprise, which would provide air cover during the approach. However, the task force was discovered by Japanese scouts, forcing the mission to begin early with the B-25s taking off April 18 at around 8 a.m., more than 600 miles out.

"I believe all the crews were 100 percent confident in the ability of the B-25s to take off the Hornet," Cole said. "We were fortunate enough that the Navy assigned a young lieutenant, Henry Miller, to come from Pensacola and teach us how to make a carrier takeoff."

Most of the sixteen B-25s, each with a five-man crew, attacked the Tokyo area, with a few hitting Nagoya. Damage to the intended military targets was modest, and none of the planes reached the Chinese airfields (though all but a few of their crewmen survived). However, the Japanese high command was deeply embarrassed leading the execution of three of the eight American airmen captured in the wake of the attack.

Spurred by the Japanese combined fleet commander, Adm. Isoroku Yamamoto, the Japanese also resolved to eliminate the risk of any more such raids by attempting to destroy as many American aircraft carriers as possible, a decision that led them to disaster at the Battle of Midway a month and a half later.

According to the Doolittle Raiders official website, Doolittle's #1 bomber, of which Cole was co-pilot, was the first over Japan and the first to drop its bomb load. Four incendiaries fell at 12:30 p.m. (Tokyo time) to incinerate a large factory. The aircraft then flew west to reach the coast of China after dark.

It was that part of the mission Cole found the scariest.

"We were on our instruments, it was night and we were at 9,000 feet," Dick Cole said. "We hit the Chinese coast. At that time the gas gauges were beginning to get close to empty. The airplane, carrying the homing station we were supposed to use to land, had crashed on the way there. Once in a while we could see lights, but the Chinese thinking we were the Japanese, immediately closed off most of their lights. That was the scariest time, looking down at that black hole and not knowing where you were or how you were going to land."

By 9:30 p.m. fuel was low and, unable to find an airfield in the heavy fog, Doolittle ordered his crew to bail out over the mountains in Haotianguan, China. Doolittle followed his crew into the night, his B-25 crashing on a nearby mountainside. Cole spent the night in a tree that his parachute had caught before he landed. The only injury sustained by any of the crew was a sprained ankle. Local Chinese escorted the Americans to Chuchow and they were eventually returned safely.

Saylor, the engineer gunner for the #15 "TNT" bomber, was part of a crew assigned to bomb targets in Kobe, southwest of Tokyo. This is when Saylor said he knew the mission would be successful.

"Our part was successful as soon as we dropped the bombs," Saylor said. "We went and got away with it. Later on all the talk started coming out about how important our mission was. Now I can understand a little better, but at the time, it was just what you did."

They dropped their bombs on a large aircraft factory and a dock yard before flying on towards China. By the time they reached China visibility was near zero in the dark rainy night. The pilot, Lt. Donald Smith, finally spotted the mountains of the Chinese coastline and tried in vain to gain altitude to pass over the mountains. With fuel running out, Smith was forced to ditch the aircraft in the water about 500 meters off shore. All crew members safely exited the aircraft before it sank, and paddled to shore in a life raft. For days the Japanese hunted the area for the American raiders, but the Americans evaded them in a Chinese junk. En route to Chuchow, Smith learned that the pilot of another bomber, "The Ruptured Duck" Bomber #7, Lt. Ted Lawson was seriously injured when his plane landed. Smith and his crew evaded enemy troops and eventually met up with Lawson allowing their flight surgeon, Lt. Thomas White, to render medical aid.

The last public meeting of four surviving Doolittle Raiders was scheduled for November 2013, but only David Thatcher (former Staff Sgt.), Cole, and Saylor were able to attend as Lt. Col. Robert Hite (USAF, Ret.) watched from his home in Nashville, Tenn.

For more information on the Doolittle Raid, check out this link: http://www.navalhistory.org/2014/04/18/doolittle-raid-lesson-in-joint-innovation-resilience 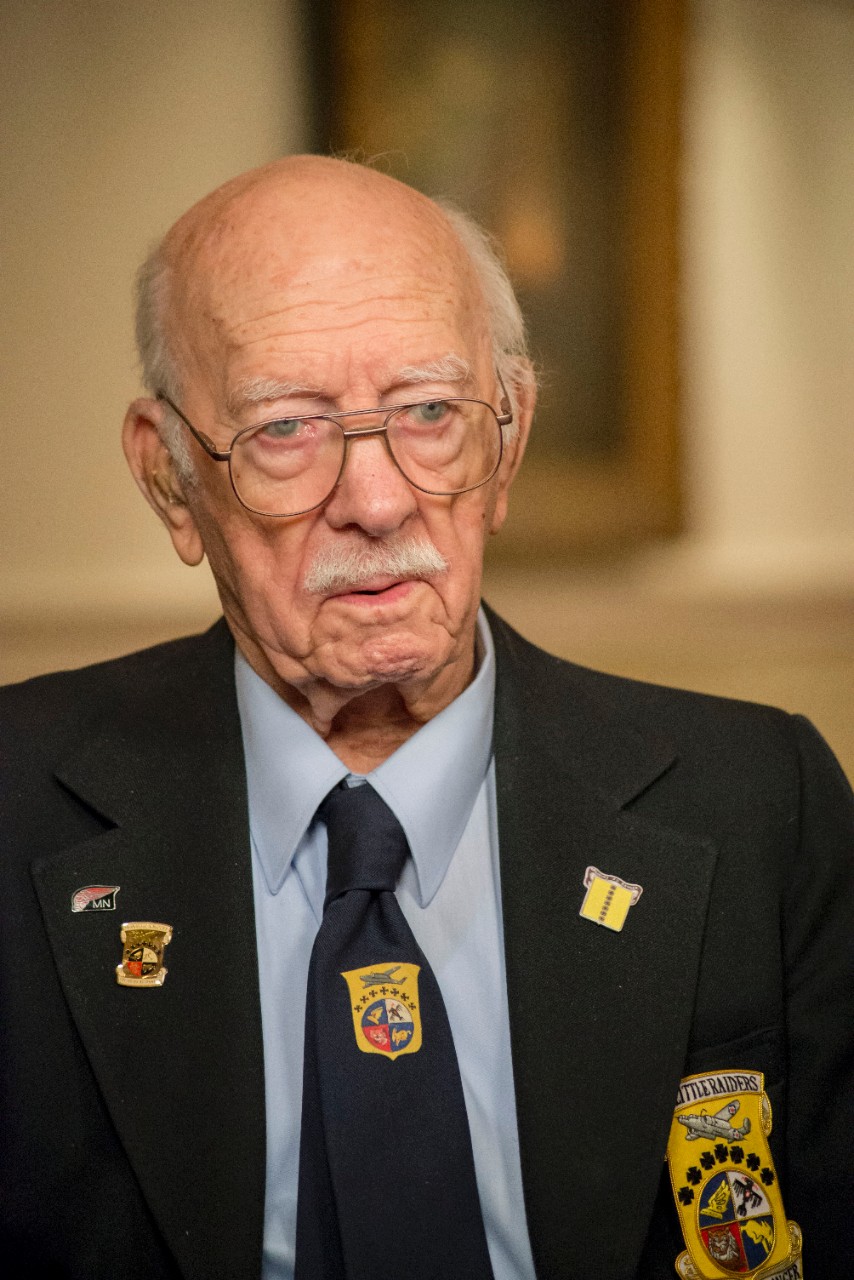 Caption: Retired Air Force Lt. Col. Ed Saylor, one of four surviving members of Doolittle's Raid, answers question about the raid during a luncheon in honor of the event at the Army Navy Club in Washington, D.C. Doolittle's Raid was an April 1942 air attack on Japan, which launched from the aircraft carrier Hornet and was led by Army Lt. Col. James H. Doolittle. (U.S. Navy photo by Mass Communication Specialist 1st Class Tim Comerford/Released)