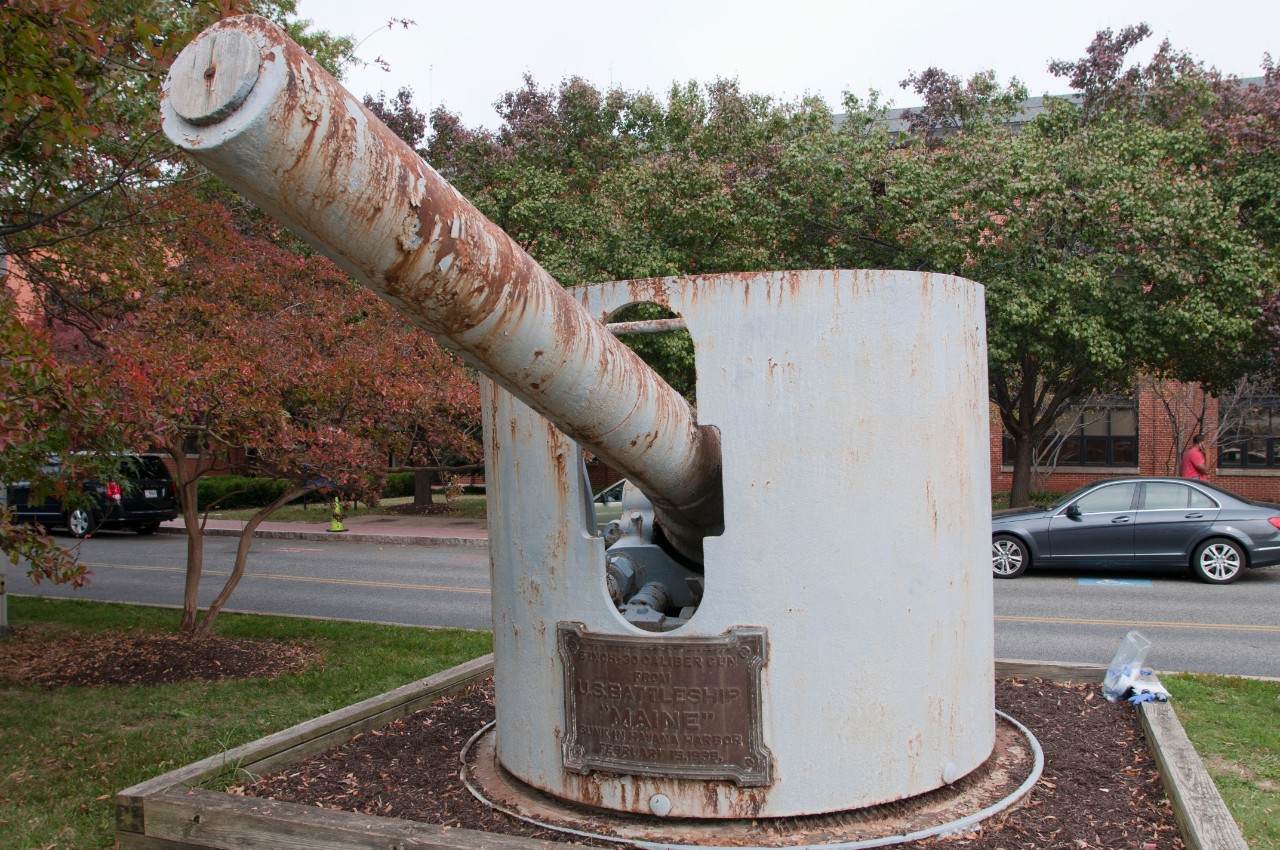 Caption: A 6-inch, 30 caliber gun from the battleship USS Maine is on display in Willard Park at the Washington Navy Yard.

WASHINGTON (NNS) -- Conservators from Clemson University working with the Naval History and Heritage Command conducted an assessment of a century-old, 6-inch, 30 caliber gun at the Washington Navy Yard's Willard Park Nov. 4 in preparation for a conservation of the artifact that was once part of a storied warship.

The gun's story began in 1888 when the ship was commissioned, but the ship rose to prominence on the evening of Feb. 15, 1898 at 9:40 p.m. when an explosion rocked the U.S. Navy battleship Maine, docked in Havana harbor in Cuba, killing 252 men immediately and 14 more, soon after.

After a month, a navy board of inquiry came to the conclusion that the explosion was caused by a mine. Though the board fixed no blame, newspapers across the U.S. fed into public opinion that the Spanish government was to blame, causing an outcry of rage from the American people. "Remember the Maine!" would act as the catalyst that led to the Spanish-American War.

Although opinions continue to differ on whether the ship was struck by a mine or suffered an internal explosion, there was doubt as early as 1910 when Congress voted funds to raise the wreck. Maine's hulk was finally floated Feb. 2, 1912 and towed out to sea where it was sunk in deep water in the Gulf of Mexico with appropriate ceremony and military honors March 16. Before being laid to rest, one of the ship's 6-inch, 30 caliber guns was removed and put on display at the Washington Navy Yard.

Fast forward 102 years to 2014 and the conservation effort which is part of an initiative with three functions, the first two have the University of Montana helping the command with its artifact baseline reset in Richmond and an artifact baseline reset at the National Museum of the United States Navy, the third part was for the gun's conservation.

"The University of Montana subcontracted out two conservators from Clemson University to work with the Maine gun," explained Jeff Bowdoin, NHHC Curator Branch Collection Manager. "It's an exceptionally historic artifact, and given its significance and the amount of money we figured it was going to cost, we thought we would have it conserved."

The lab at Clemson University has had a good amount of experience working on guns and has done work for the Navy before as well.

"We have done extensive work for the National Parks Service conserving several of their guns at Fort Moultrie, Fort Sumter and Sullivan Island," said Stephanie Crette, director of Clemson University's Warren Lasch Conservation Center. "Our main project is an artifact owned by the Navy, H.L. Hunley."

As the conservators from Clemson University studied the gun, they took photos of its state and took paint chips from its surface.

"We will make a cross section and run them through a scanning electron microscope to try and identify the different coating layers," said Crette. "We will try and identify the earliest paint layer so we can replicate the color."
The gun, which has been exposed to the elements in the park for years, has some obvious issues that the conservators found.

"There is most likely iron and other metals that are heavily corroded and it has lead, so we will have to remediate it to remove the lead," Crette said. "There are parts of it that are less corroded or painted better, which looks to me like it's a different metal. Maybe a copper alloy, but we will have to see when the paint comes off. But it looks like we may not have to desalinate it, which will make it easier. We will have to remove all the paint layers and re-coat it, but we will not have to soak it in an alkaline solution to remove the salt."

Eventually the gun will be transported from the Navy Yard to their laboratory for treatment, but it may have to wait for the right time.

"But we are entering winter and we don't want to transport it when the weather might not be good," Crette explained. "So probably, it will be early spring before we receive it."

Once at the lab, they don't believe it will take long to get the gun to a state where it can be shown again.

"Since we don't have to do the desalination soaking treatment which can take up to a several years, I would estimate a couple of months," said Lisa Nasanen, a Conservator from the lab. "We only have one chance to do it right, so we are going to take our time. The coating removal has to be done perfectly and then to get the re-coating option right and the color right, to get it to look the part."

They stressed that the timetable is only an estimate.

"It should be ready for display next summer," Crette said. "But as usual with a cultural heritage project like this, until you have removed all the paint and can see the original surface of the object, you can't have a hard deadline."

"A lot of the diagnostics, right now, are covered by the paint," Nasanen added. "So as soon as we take that off, we will know exactly the kind of piece we are dealing with."

Once it is restored, NHHC is looking at a couple of options for the gun.

"It can go one of two places, into the national museum of the U.S. Navy or, if they can't accommodate it, we can put it in storage at our collection management facility in Richmond," Bowdoin said. "So it will be conserved and protected in an indoor environment. We would even entertain a loan, so long as it was held inside."

For more information about the battleship Maine and NHHC visit the command's website at www.history.navy.mil.