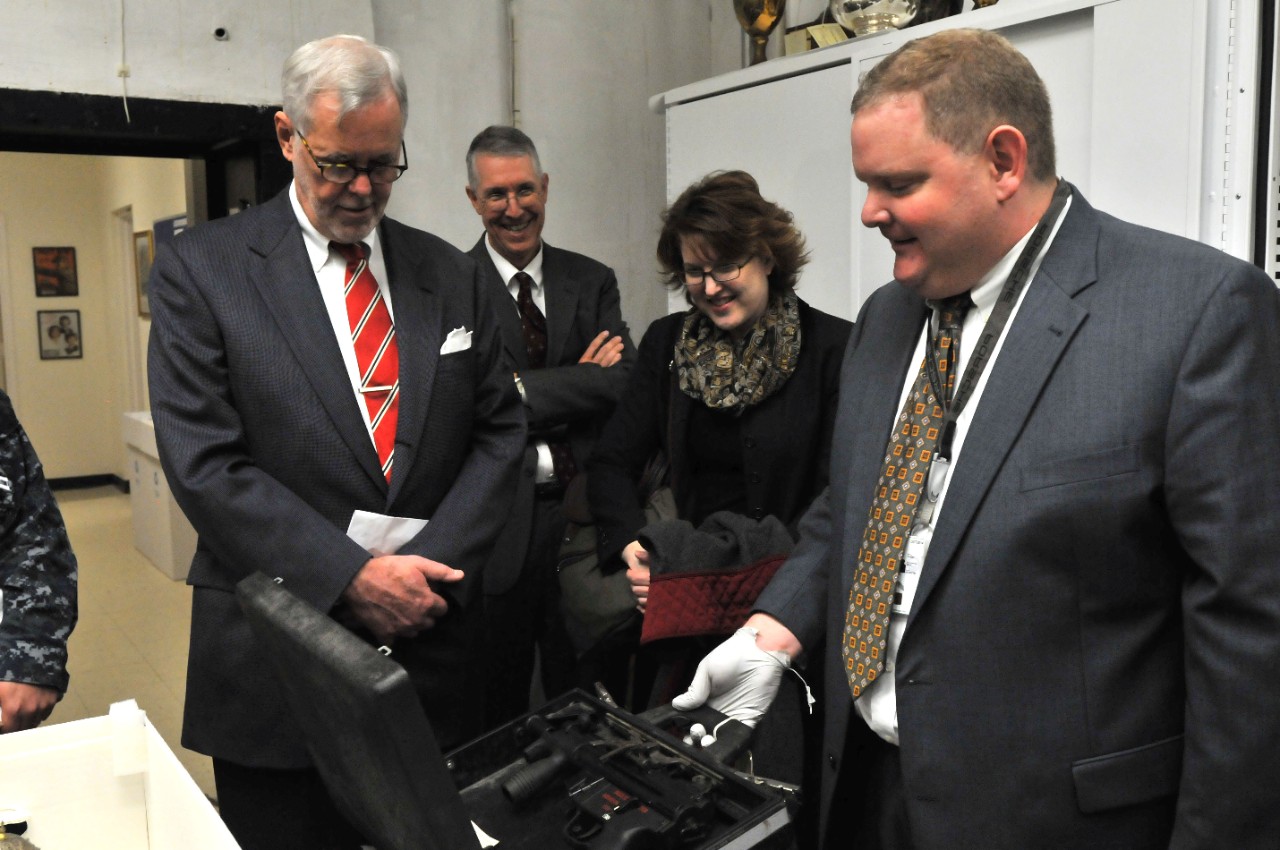 WASHINGTON (NNS) -- Family vacations often have a profound and lasting effect on children. For some, it's an Instagram or Facebook album of selfies taken at landmark sites with the occasional snarky comment about being dragged to "old" places.

For Frank V. Thompson, those family vacations, which predate both Instagram and Facebook, would be the seed that would bloom into a career.

It was 1981 when Thompson's father, a World War II veteran, decided to take his family with him on a business trip to Honolulu, Hawaii. During a visit to Pearl Harbor, 11-year-old Frank bought a book about USS Arizona at the memorial gift shop. By the time the family returned home to Liberty Hill, S.C., young Frank was hooked on history.

He studied history at the College of Charleston. As he neared graduation, there was concern about employment prospects with a bachelor's degree in history which he jokingly describes as a "You want fries with that?" degree.

But just a few days after graduation in 1992, Thompson moved to Washington, D.C., to start his new job and career as staff curator with the Naval History Center, as it was called then.

One of his favorite memories of those early years learning the job was getting the opportunity to put on his first exhibit in the wardroom of the battleship Missouri (BB-63) where it was docked at Bremerton, Wash., for the 50th anniversary of its 1944 commissioning. A few years later Missouri was moved to Hawaii where she has served as a museum ship at Pearl Harbor since Jan. 29, 1999.

Now on the job for nearly 22 years, Thompson is the deputy director of the Collections Management Division of the Naval History and Heritage Command, having spent almost half of his life up to his eyebrows in Navy history.

A career as a curator has been a passion for Thompson, but it was an enigma for some members of his family - other than his parents, Mary and the late John Thompson Sr. - who weren't quite sure what Thompson did for a living. When Thompson's brother, John Jr., who is an insurance agent in Camden, S.C., visited the Washington Navy Yard a few years ago, Thompson took him through the weapons vault and showed him some of the priceless artifacts.

"My brother could finally understand the cool factor in me being a curator," Thompson said.

His dedication to his work has been recognized by his peers numerous times. From the Historic Naval Ships Association, which recognizes those who work for the preservation of historic ships and the items on them, Thompson has twice received the Russell Booth Award for Outstanding Achievement, 1996 and 2000; was the 2006 recipient of the Henry Vadnais Jr. Award for Outstanding Service, and in 2012, at the ripe old age of 42, he received the specialty title "Old Walrus" for his institutional knowledge of U.S. Navy history and artifacts.

Asking Thompson to pick a favorite artifact is like asking a mother to choose a favorite child. He recalls moments of standing under historic ships in dry dock and holding priceless artifacts. He can look at an old piece of metal and see its soul, its cost in humanity, and how and why it was created.

But when really pressed, and after careful consideration, Thompson goes back to that Iowa-class battleship, the last of its kind. He picked the commemorative brass plaque mounted in the Missouri's deck where the Japanese surrendered, bringing World War II to a close. The plaque on the ship is a reproduction, with the original preserved within the collection under his watch at the Navy Yard.

"To me, it's more than a piece of brass. The plaque, simple in design, serves as an eloquent memorial to the price the nation paid in terms of human cost, national treasure, and industrial effort required to get the Missouri to Tokyo Bay on Sept. 2, 1945."

One of the elements of NHHC's mission is to provide essential support in policy development, enhancing readiness and building esprit de corps. The command achieves that by interpreting, sharing, and making Navy history and heritage relevant for today's Navy leadership and Sailors. It's a part of the mission that Thompson feels strongly about and in which he has a strong personal interest.

"I remember once conducting a site visit to one of the nuclear cruisers about to begin the decommissioning process," said Thompson. "In those days - the mid '90s - the Curator Branch was beginning to become more proactive in the collection process. We were attempting to engage the crews of ships and get them to think of their jobs in a broader historical context. During this particular discussion, one of the Sailors asked me, 'Why are you interested in the stuff on this ship? I mean it's not historic.'"

"I thought for a moment and asked him to define what he thought of as 'historic.' He responded, 'You know, something like the USS Constitution,'" Thompson continued. "I explained that the Navy did not build Constitution to be a museum piece. She was built to fight. I pointed to the bulkhead and said, 'twenty years from now when your grandchildren ask you what you did in the Navy, what will you tell them? What would you want to show them?' I can still remember the thoughtful expression on that Sailor's face when he responded that he had never thought in those terms before."

It was a moment by which Thompson is still inspired. So despite all of the paperwork and cataloging, for him, the job of a curator is just as much about helping others determine what their history might be as it is about finding those treasures yet to be discovered.

"People don't really know how much fun this job is," he said. "People don't think history can be a good career path, but it can."

Thompson, by the way, still has that book about USS Arizona he read during that family trip more than three decades ago.