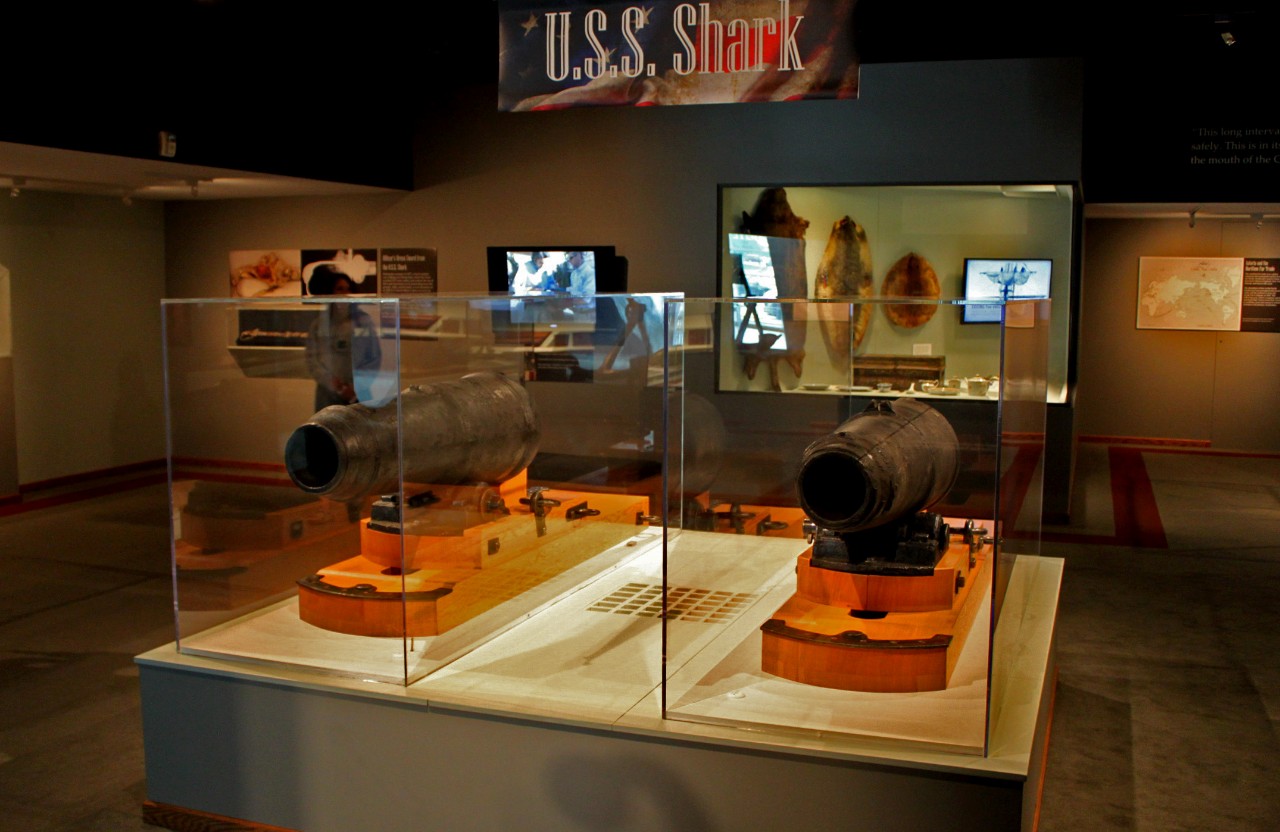 Teenager Miranda Petrone and her father walk along an Oregon beach in 2008...

The furthest thing from their minds: Shark...

Or part of one... Closer inspection reveals the rock is actually a small cannon which the Petrones later learned came from a pre-Civil War-era Navy schooner called USS Shark.

Commanded by none-other than Lt. Matthew C. Perry, a rising officer in the U.S. Navy who was the brother of Commodore Oliver Hazard (Don't Give Up the Ship) Perry. The younger Perry would make his own name by successfully negotiating a treaty in 1854 with Japan to open up trade to American merchant ships.

When USS Shark was built in 1821 at the Washington Navy Yard, one of the Navy's primary missions was to disrupt the illegal trans-Atlantic slave trade and to suppress piracy. Shark's first mission was to sail to New York and collect Dr. Eli Ayers to take him to West Africa, where he helped negotiate a treaty with six tribal kings to purchase land for freed slaves. That land is now the country of Liberia.

During its 25 years of service, Shark met the challenge of the Navy's mission all over the world. It ensured safe passage of American shipping in the West Indies, helped found the naval station in modern day Key West, protected American fishing in Newfoundland as well as American citizens during the Peruvian civil war, and was the first armed American ship to navigate westward through the Strait of Magellan. But its service to country ended prematurely off the coast of Oregon territory.

"In 1846, [it was assigned] to explore and survey the Columbia River and the Northwest, and to make an American presence during the US-Canadian boundary negotiations with Britain," said Robert Neyland, Naval History and Heritage Command's Underwater Archaeology branch head. "It was at the end of this survey, while crossing the bar at the mouth of the Columbia River, that it [ran aground]. Although the ship was a total loss, all the crew was saved."

Fifty-two years later, one of the cannons from the ship washed ashore downriver and gave the beach the name Cannon Beach. It would be more than a century later before any artifacts reared up again, this time in 2008 about five miles south of Cannon Beach near Arch Cape, Oregon. During that time, the ship's carronades, or small cannons, sat underwater with thick crustaceans growing over them.

When the Petrone duo happened upon the rock, they realized almost immediately they weren't rocks at all when they discovered a property about it that rocks simply don't have: Rust. They reported their find to Oregon State Parks and Recreation-and this was exactly the right action to take in order to conserve history.

Within a short amount of time, the find was shipped to Texas A&M in order to be properly and safely preserved. A hard concretion of volcanic sand and large cobble stones completely covered the carronades. Rust leached through this concretion and the wood suffered from iron corrosion.

Along the way, Neyland came aboard for the recovery effort.

"The trip was at the invitation of Oregon Public Broadcasting (OPB) and was for the filming of a History Detectives episode," said Neyland. "OPB donated the cost of travel for myself and covered the costs of technicians to X-ray the cannon and document them with 3D laser scans. The end products for the Navy [were] public education on the diplomatic, exploratory, and humanitarian roles of USS Shark and the Navy during the period between 1821 and 1846.

"In addition, my site inspection of the carronades, the X-rays, and laser scans have [all] provided permanent records of these Navy artifacts. These records will assist conservators in treating and preserving the cannon."

It took a lengthy process to restore the carronades to their historical state, just in time for them to be among the artifacts featured in an exhibit that opened in May 2014 at the Columbia River Maritime Museum in Astoria.

In the future, should anyone stumble across a cannon or any kind of Navy object, there are several precautions and steps to follow.

"First, they should notify the state park, or the state archaeologist," said Kate Morrand, the senior conservator and laboratory manager at NHHC's Underwater Archaeology Branch. "Artifacts such as the carronades that belonged to the Navy are government property regardless of when they were lost.

In addition, they shouldn't move the find, either. Doing so would inflict a new and probably wholly different set of environmental conditions on the artifact, and in addition could possibly damage or even affect history. Moving an artifact without first recording its original position can alter how historians view its discovery. "

Just like in a crime scene, "[we] can deduce quite a lot of information just from how it's positioned relative to the rest of the site," said Morrand.

The consequences for moving such objects could be rather severe, too. If someone were to seize a souvenir from a discovered site, they could expect to receive a house call from the police. In the case of a find like the carronades, which are protected by the Sunken Military Craft Act passed by the U.S. Congress in 2004, a violator could face significant fines up to and beyond the six figure range.

For more about the SMCA, visit http://www.history.navy.mil/branches/org12-12a.htm .

In making this historic discovery, the Petrones followed exactly the right process to notify the proper authorities. Now the rest of the nation can benefit from their find, too. Despite having wrecked off the Oregon coast 162 years earlier, the legacy of USS Shark continues to sail.