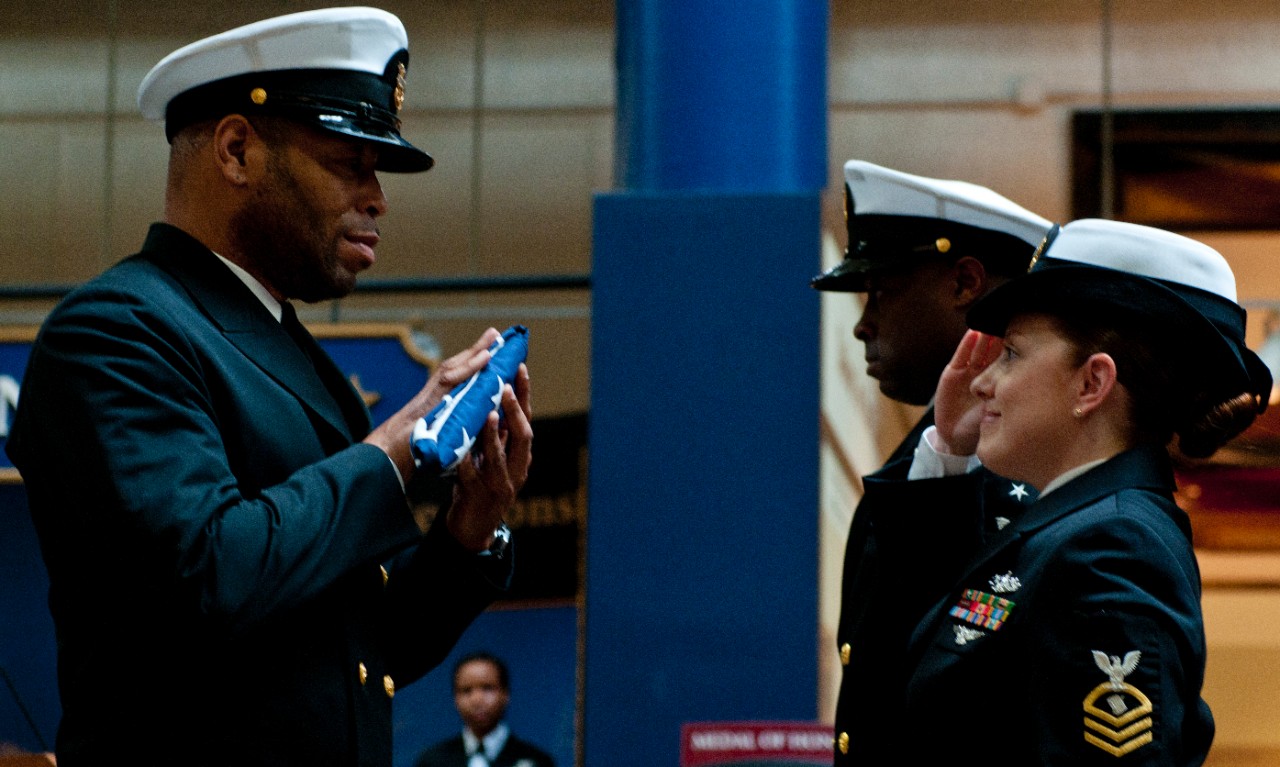 Caption: The U.S. Navy retired Master Chief Shawn Newcoste, the senior enlisted advisor at the Naval History and Heritage Command (NHHC) in a ceremony on April 4th at the National Museum of the United States Navy in Washington D.C.

WASHINGTON (NNS) -- The U.S. Navy retired Master Chief Shawn Newcoste, the senior enlisted advisor at the Naval History and Heritage Command (NHHC) in a ceremony on April 4th at the National Museum of the United States Navy in Washington D.C.

His storied career culminating as "America's Yeoman" started more than 30 years ago as young man from Lafayette, La. He yearned to do something special. In 1983, at age 18, he wanted wanted a life he could tell stories about, so he set off to visit the armed forces recruiting offices. It was the Navy that offered him the most of what he wanted.

"The adventure and travel that the Navy offered seemed the most sophisticated, out of all the recruiters that I went to talk to about the armed forces," said Newcoste. He entered the Navy's Delayed Entry Program and reported to the Navy's boot camp at Orlando, Fla. as an undesignated seaman in 1984. He excelled as a sailor and ultimately chose the job of yeoman.

Since entering the Navy, he has had a full career as Yeoman, the oldest job in the U.S. Navy, dealing with all forms of administration and leadership, including protocol issues, personnel evaluations, official correspondence and policy directives. Newcoste has also worked as a recruiter, an instructor and facilitator, and as a liaison between enlisted Sailors and command leaders as a Senior Enlisted Advisor. In his off time he has worked hard as a health and fitness instructor, even teaching spin to motivated military and civilians at the Pentagon. Over time, although first tongue-in-cheek, the moniker "America's Yeoman" eventually stuck.

Many members of Newcoste's family traveled from Lafayette to join him on his last day as a Sailor. They were incredibly impressed with his time spent in the service.

"His Navy career has exposed us to so many different new experiences, vicariously through him," said Travonda Harvey, Newcoste's niece who came from Louisiana. "Every port and every place that he went we were able to enjoy by pictures, by souvenirs and his stories. Through him we were able to travel and be part of the Navy as well. The Navy's effect on his life is priceless, limitless and the Navy is always going to be him. Words cannot explain how proud I am of him. I am so full of joy and happy for him. I haven't ever flown before and for this, I got on a plane. It is that momentous."

Newcoste served as the executive assistant to three Master Chief Petty Officers of the Navy (MCPON), Joe Campa, Rick West and current MCPON, Michael Stevens. The position of MCPON is recognized as the highest ranking enlisted Sailor, and as such is the voice of all Navy enlisted Sailors to the Navy's chief of naval operations, as well as the Secretary of the Navy and even elected officials. The long hours, high workload and high stress job of the MCPON's office is a crucible for Sailors, especially in the senior positions Newcoste fulfilled there.

"My most challenging job was working in the Office of the Master Chief Petty Officer of the Navy (MCPON)," He said. "Challenging, because it was totally foreign to me - the level of purpose of that office has, and how much impact they had on the Fleet. But the challenge became rewarding as the MCPONs I served gave me the opportunity to shape and refine things that had a significant impact on our enlisted force."

Former MCPON Rick West served as the guest speaker during his retirement and told Newcoste and the audience exactly how he saw the impact of what Newcoste had done in his career.

"There are thousands of Sailors at sea and ashore that are better today because Shawn Newcoste and trained and led them. It is impossible to pay tribute to this man in the short time I am given today," West said. "Shawn is a good man, he is a friend and a shipmate and a master chief. He never stopped thinking about our Sailors, while out there getting the J-O-B done. Shawn, as you leave the Navy you won't miss the jobs you have had, you will miss the thousands of people you impacted."

The U.S. Navy's current MCPON, Mike Stevens had a special parting gift for the Master Chief that he presented during the retirement ceremony.

"You have all heard about this 'America's Yeoman' thing, right?" Stevens asked the audience. "Okay, unofficially you carry the title of 'America's Yeoman,' because that is a self-appointed title," he said jokingly. "I believe it unfit to retire you after thirty years of service carrying an unofficial title. So on this day April 4, 2014 as the Master Chief Petty Officer of the Navy, I am officially making you America's Yeoman. There is a caveat. Furthermore let it be known that only one yeoman active or retired at any given time may carry this title. So, if you want someone else to have it shipmate, you have to give it up."

Though for Newcoste leaving a job that he has had such pride in for so many years is bittersweet, he want Sailors to know the history of the organization he loves.

"It is extremely important for our Sailors to understand and know Navy history," Newcoste explained. "It dies if we don't preserve it. How could you come into an organization, that you say you love and respect and not know what its history and heritage has been? Coming to NHHC definitely educated me more than I have ever been. I didn't realize how much I appreciate what we do, until I was assigned here. Now I cannot stop telling people about what NHHC is all about, especially Sailors."

"During his tour here he has brought our Sailors together in a way that reflects both his Navy pride and his complete dedication to his people," said NHHC Director, Capt. Henry Hendrix, Ph.D. "He has inspired the Sailors at our command to heights, I believe, which were unthinkable to them before. He has been my voice to the Sailors, and their voice to me. He has been an invaluable asset and sounding board. His time here at naval history may be complete, but through his advocacy of our people and mission his influence will be felt for a long time. I'm sad to see him go, but his contributions to the Naval History and Heritage Command - and the U.S. Navy - have been immeasurable."

The Navy has taught the master chief many things but two things stand out in his mind.

"I have over 30 years of lessons I learned from the Navy," Newcoste said. "One that stays near to my heart is the value of people and what they bring to your life as you meet many of them over time."

And the Navy has changed that young man who entered its ranks in 1983.

"I learned discipline that was different from what my father taught me and shaped me to being the Sailor I am today," Newcoste explained. "The Navy has made me a stronger, more assertive, effective and efficient person, than I was when I came in. Hey, I was 19 years old and even though I was raised around older people, I still had much to learn about the outside world. I feel so worldly now that I can go anywhere and enjoy any culture or people."

He attributes much of his growth as a sailor and as a man to his mentors.

"I have several mentors," Newcoste admitted. "My Mom and Dad, Gladys and Joe, are my greatest mentors -- even though they are no longer with me and have not been for years - I looked up to them for support and guidance on what I should do in my life, the steps I take and where I should go. My Navy mentor I would say is an ole' Boatswain's Mate Master Chief Daniels. As a young Sailor on a small ship he mentored me to staying on course and focus with my career. He is the very reason I made it up the ranks so early in my career because his motto was 'work hard, play later.'"

He believes that mentorship is something every Sailor should pass along. He worked hard to do so.

"My best achievement in the Navy, was reaching every Sailor I could to support, guide and mentor them," Newcoste said. "If I could help mold a Sailor in the right direction, even when others think he or she does not have potential, I would do it. We all have a purpose and something to offer in life."

He has some advice for sailors looking to excel, the way he did, in whatever they do.

"Look, learn and listen,' He states simply. "Forward thinking gets you a very long way. Be consistent and take pride in what you do. Do it from the heart, not just to get advance."

As he receives his flag and enters a new world without specific uniforms components and easily identifiable ranks, he says there are some parts of the service he will miss.

As for now, he plans on taking a well-deserved rest.

"I am going to sleep for at least three months," Newcoste said. "Then I am going to travel as much as I can before I go broke and then continue working in Health and Fitness."