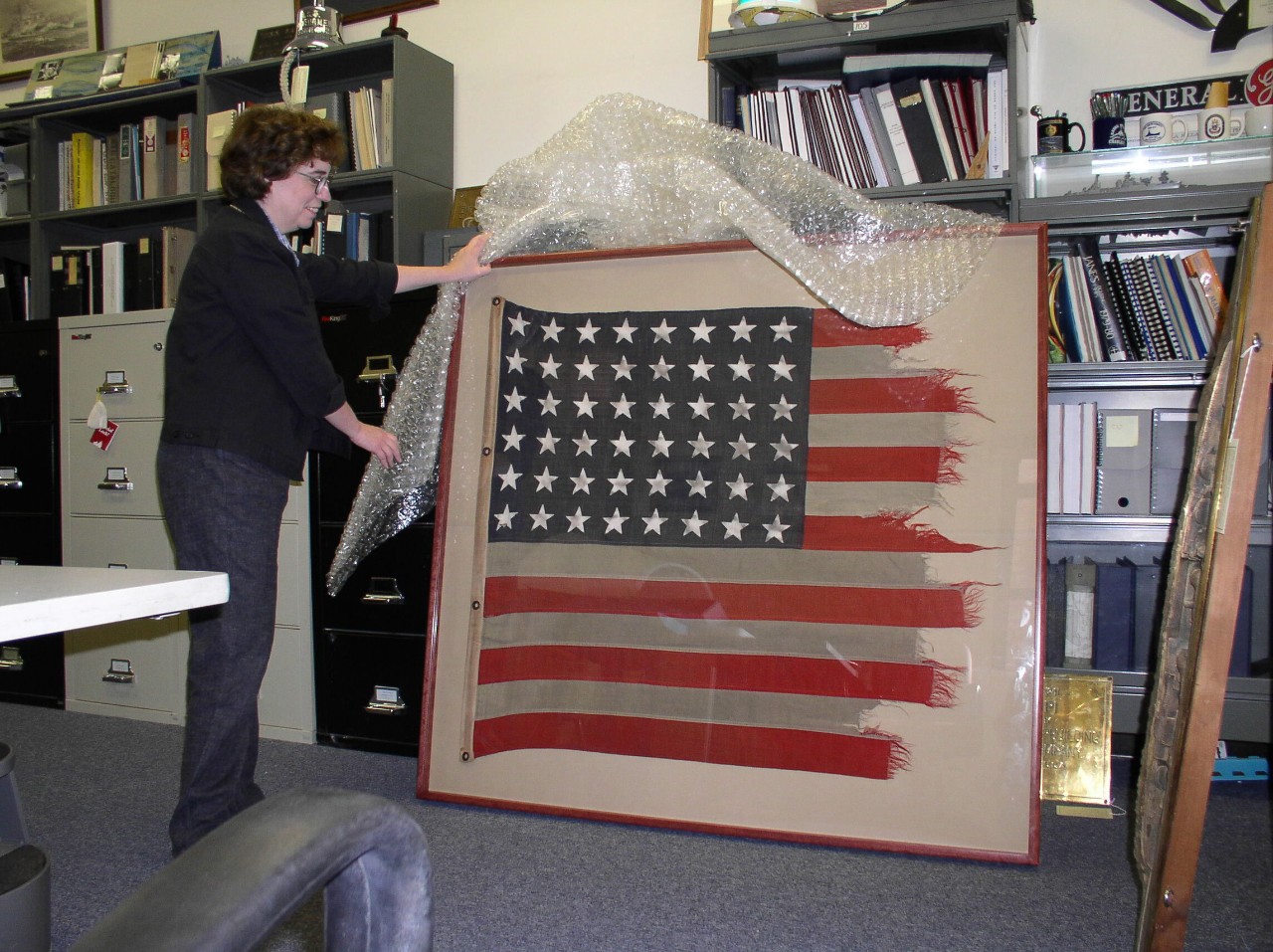 WASHINGTON (NNS) -- Many Americans fall into one of two categories. One is made up of those who see a basement or attic filled with stuff, shut the door and find something else to do.

At the other end of the spectrum are those who see the same thing, but instead roll their sleeves up and dig in, eagerly anticipating rediscovering hidden treasures.

The curators of the Collection Management Division (CMD) with the Naval History and Heritage Command (NHHC) are the dig-in types. They've been in the midst of an artifact baseline reset, which means the staff is going through the entire collection, item-by-item, to make sure it is correctly cataloged, photographed, inventoried and if necessary, rehoused under the proper conditions.

NHHC has a long history of preserving, analyzing, and disseminating the history and heritage of the U.S. Navy. The organization traces its roots back to 1800 when President John Adams instructed the first Secretary of the Navy, Benjamin Stoddert, to prepare a catalog of professional books for use in the Secretary's office. Over the next two centuries, the Navy's history was collected through various offices and departments. Finally, in the early 1970s, the organization, ultimately entitled the Naval History and Heritage Command, became a single entity responsible for all aspects of Navy historical preservation and dissemination.

Yet it's up to a relatively small staff to keep track of the hundreds of thousands of items that are part of NHHC's programs for historic artifacts, art and underwater archaeology. And among the most popular is NHHC's historic weapons collection, according to Karen France, the curator branch head of NHHC's Collection Management Division.

Those weapons include some of the oldest in NHHC's collection, including a bronze 6-pound Spanish cannon cast by Andres Melendez in 1686 for King Charles II. It was named "San Bruno" to honor Saint Bruno, an 11th century scholar and founder of the Carthusian monastic order.

San Bruno joins 25 other bronze or iron cannons throughout the Washington Navy Yard alone. There are others within the Museum of the U.S. Navy on base, within NHHC's historic small arms vault and displayed at other NHHC museums and approved organizations throughout the United States and internationally.

The core of the collection was created by Rear Adm. John A. Dahlgren, a former commander of the Washington Navy Yard and a naval ordnance innovator. After being assigned to ordnance duty at the Navy Yard as a lieutenant in 1847, Dahlgren invented and developed bronze boat guns, heavy smoothbore shell guns and rifled ordnance during the next 15 years until the start of the Civil War. In order to study the feasibility of the weapons he was creating, Dahlgren formed the first sustained weapons research and development program for the U.S. Navy, which earned him the title "father of American naval ordnance."

Dahlgren used the older weapons to research while creating his weapons, like the Navy carbine.

"Basically, we've been tied to this collection since 1908," France said. "We have weapons that are pre-American Revolution to current operations, and that collection also includes weapons made for the Navy, its allies and adversaries."

The collection features a number of experimental guns that earned the Washington Navy Yard its reputation in gun development. Weapons like
* the experimental, Dahlgren-designed, .69 caliber percussion rifle that features what a weapons expert in 2009 described as an "experimental hammer that appears to be intended for some type of tape primer mechanism,"
* a 5.56 mm rifle that was built as a low maintenance experimental rifle system,
* and an experimental minigun machine gun that never reached production.

"These artifacts are examples of development weapons, and as such reflect the continuity of the Navy's tradition of development new technologies to meet current needs, just as Dahlgren did at the Washington Navy Yard," according to Julie Kowalsky, a curator with the Historic Small Arms Division.

The small arms artifacts are among the most popular parts of NHHC's collection, France said. Some are on display and other items from within the collection may be rotated to museums for display as new exhibits are created.

Only a small percentage of the collection, however, is available for display to the public. The most precious weapons remain in the vault, since the Navy Yard doesn't have a facility to accommodate a public viewing of the items, although researchers may view the items by appointment, France said.

But the curators are taking photographs of nearly every artifact within the collection in order to put it online to show off items in collections that aren't open to the public, like those in the small arms vault.

"Our goal is to see more of our artifacts being used to illustrate stories about the Navy's history and heritage, and to have these images available to the public once they are all digitized."

Some of those artifacts not available to the public are spread among four offsite storage facilities. But plans are in the works to consolidate the four off-site locations into one that can offer the controlled temperature and humidity necessary for the preservation of artifacts, France said.

"I don't think people realize the degree of complexity of managing a collection this size," she said. "We are trying very hard to bring it to a higher professional level, and it takes a lot of detail, working proper research and not just putting items in boxes and writing the number down."

When not cataloging and documenting new items donated to the Navy, the staff's historic arms curators also supply policy advances to the rest of the Navy about on issues such as proper object handling and preservation for items other commands may have on display.

"Right now, the 100 percent inventory reset is our main focus and supporting other outreach endeavors of the command and the Navy," France said.

The Naval History and Heritage Command, located at the Washington Navy Yard, is responsible for the preservation, analysis, and dissemination of U.S. naval history and heritage. It provides the knowledge foundation for the Navy by maintaining historically relevant resources and products that reflect the Navy's unique and enduring contributions through our nation's history, and supports the Fleet by assisting with and delivering professional research, analysis, and interpretive services.

To view photos of more than 500 historic artifacts in the NHHC collection, check out the command's Flickr page at https://www.flickr.com/photos/usnhistory/sets/.

For more information on Naval History and Heritage Command, visit www.history.navy.mil or its Facebook page at https://www.facebook.com/USNHistory/.