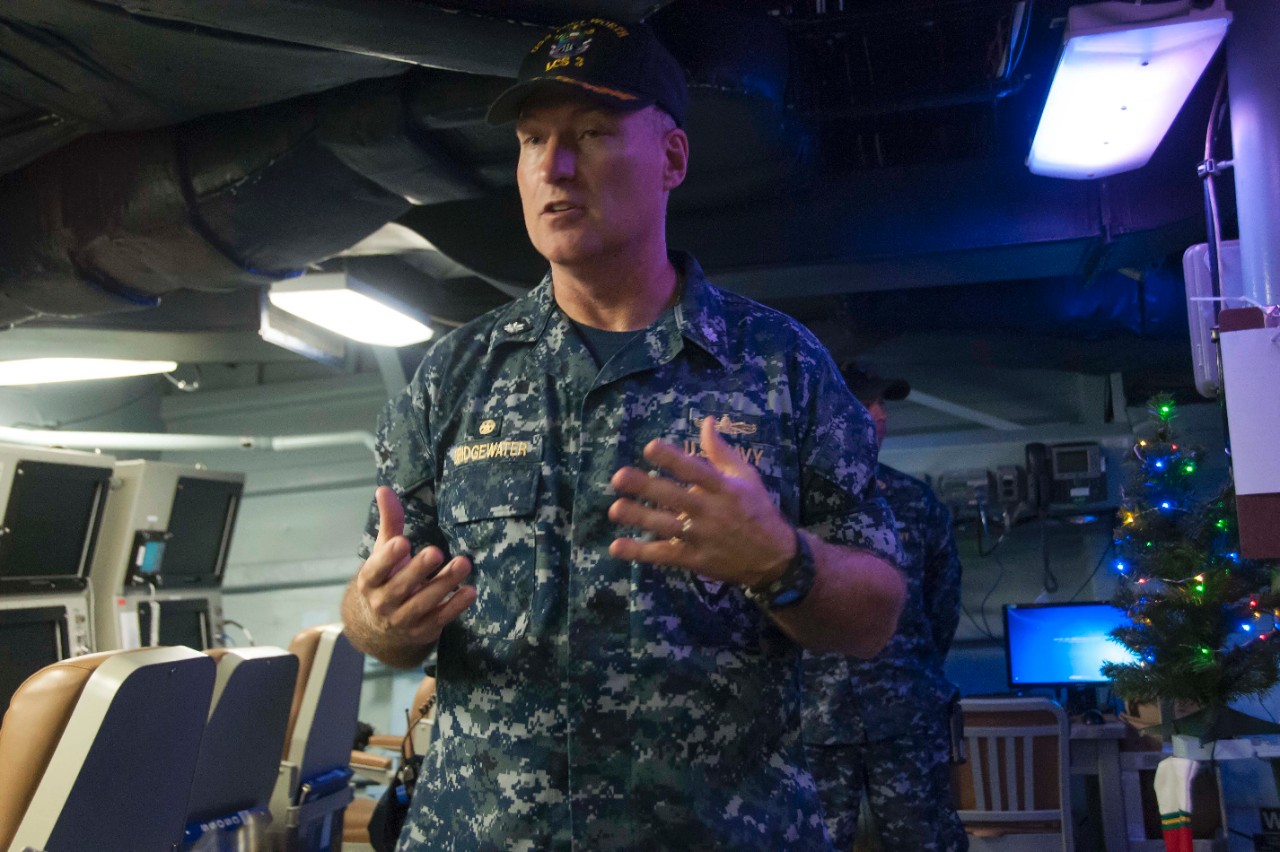 Caption: Cmdr. Kendall Bridgewater, commanding officer of the littoral combat ship USS Fort Worth (LCS 3), gives a tour of the ship during her first port call. Fort Worth is conducting its maiden 16-month rotational deployment in support of the Indo-Asia-Pacific rebalance. (U.S. Navy photo by JoAnna Delfin/Released)

From USS Fort Worth Public Affairs

PACIFIC OCEAN (NNS) -- In an address to his crew over the ship's 1-MC announcement system Dec. 7, Cmdr. Kendall Bridgewater, USS Fort Worth (LCS 3) Crew 104 commanding officer, reflected on the significance of the attack on Pearl Harbor 73 years ago.

"Good morning, Fort Worth," said Bridgewater. "Today is December 7th. A day which will live in infamy. A day that is even more poignant for all of us right here, right now. Just over a week ago, we were in Pearl Harbor. Many of you visited the USS Arizona memorial and reflected on that day. Now we are in 7th Fleet -- the Asia-Pacific. A vast maritime region that was the scene of many great naval battles throughout World War II. A war that defined our Navy and set us on the course we continue today.

"As we drive westward, I'd like you to reflect on what connects us to our past. Our victory in World War II can be directly attributed to the strength of our partnerships and alliances. Seventy-three years later, the world has changed. We are no longer engaged in battle on the high seas, but we do face new and unique challenges. New challenges that require a joint response and strong partnerships. And that is what all of us on Fort Worth are here to do over the next 16 months. To build and strengthen relationships with our partners and allies, and to maintain the security and stability in Southeast Asia that our nation requires of us.

"I'll leave you with one more connection to our past that rings true today. On Dec. 7, 1941, Petty Officer 3rd Class Dorie Miller stepped out of his role as a cook to ferry injured Sailors to safety and to man a machine gun. His heroic actions earned him the Navy Cross, which was pinned on by Adm. Chester Nimitz. Nearly two years later, he would give his life in service of his country.

Currently on a 16-month rotational deployment in support of the Asia-Pacific Rebalance, Fort Worth is a fast and agile warship tailor-made to patrol the region's littorals and work hull-to-hull with partner navies, providing 7th Fleet with the flexible capabilities it needs now and in the future.