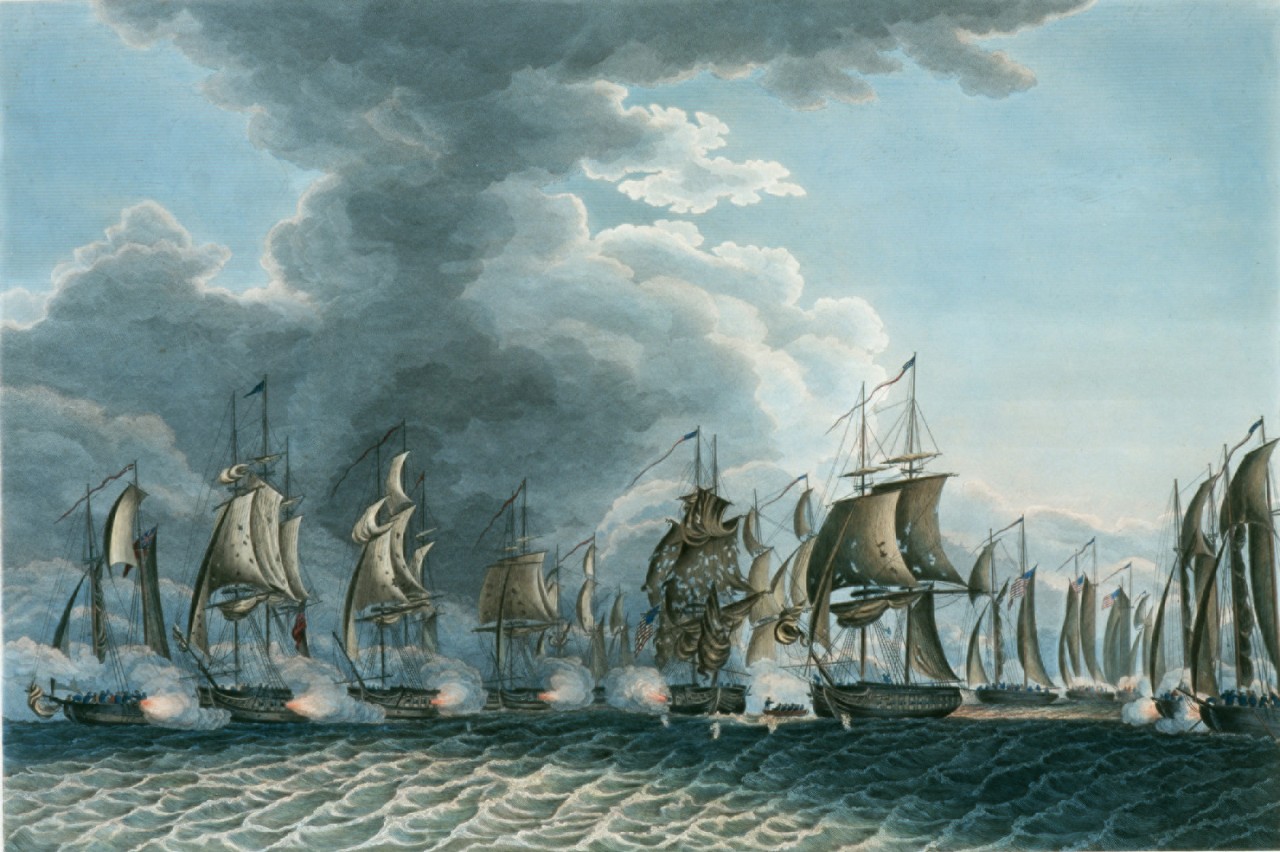 Caption: WASHINGTON (Sept. 6, 2013) A painting shows a scene from the Battle of Lake Erie, Sept. 10, 1813. The battle took place between the opposing forces of the U.S. and Britain on the contested waters of Lake Erie during the War of 1812. The Battle of Lake Erie was one of the pivotal points of the war, with the United States trying to invade parts of Canada to use as a bargaining chip against the British in order to gain Sailor's rights and Free Trade. (U.S. Navy photo/Released)

The collection, donated by William I. Koch, will be on display in Smoke Hall and contains paintings that depict various naval vessels and sea battles from the War of 1812.

The collection's centerpiece, a painting by Thomas Henry, depicts close quarters battle between USS Chesapeake and HMS Shannon. It pays tribute to Capt. James Lawrence and the legacy of his dying command, "Don't give up the ship," which became a popular battle cry and was adopted by Lawrence's friend, Commodore Oliver Hazard Perry, as the battle flag on his flagship, USS Lawrence.

"Mr. Koch's interest in Lawrence's naval career stems from a shared ancestry with him," said Sara Philips, Naval Academy architect and project manager for the 2013 "Seas, Lakes and Bay: The Naval War of 1812" art exhibit. "He has a deep respect for the United States Navy and the men and women who serve in it."

The Naval Academy borrowed extensively from Koch's collection in 2013 and displayed the items in the "Seas, Lakes and Bay: The Naval War of 1812," art exhibit in Mahan Hall. Combined with related items from the Naval Academy collection, this exhibit provided a detailed overview of the naval battles in the war and described the impact that this time period had on the future development of the U.S. naval fleet.

The collection will serve as a reminder to the midshipmen of their naval history and heritage, and the sacrifices made to protect the nation, according to Koch's friend, Roy Bell, Naval Academy Alumni.

"He knew that in the chill of the morning, at 6 a.m. before reveille, there would be [midshipmen] in here studying and thinking," said Bell. "He knew at the end of the day when mother Bancroft closed her eyes, there would be students here looking. He wants the midshipman to come across these paintings and know the ultimate sacrifice men like Capt. Lawrence have given for this country. He wants them know that freedom isn't free."

At the donation ceremony, Wyatt Koch spoke on behalf of his father, stating his father's donation came because of the contribution the Naval Academy gives our country by developing future leaders for it.

"My father thinks very highly of the United States Naval Academy," said Koch. "It teaches science, team work, leadership and values. It teaches the fundamentals everyone needs to reach his or her life goals. He is honored to be a part of this wonderful Academy. USNA has a great heritage, and every one of these students has a chance to add to that legacy."