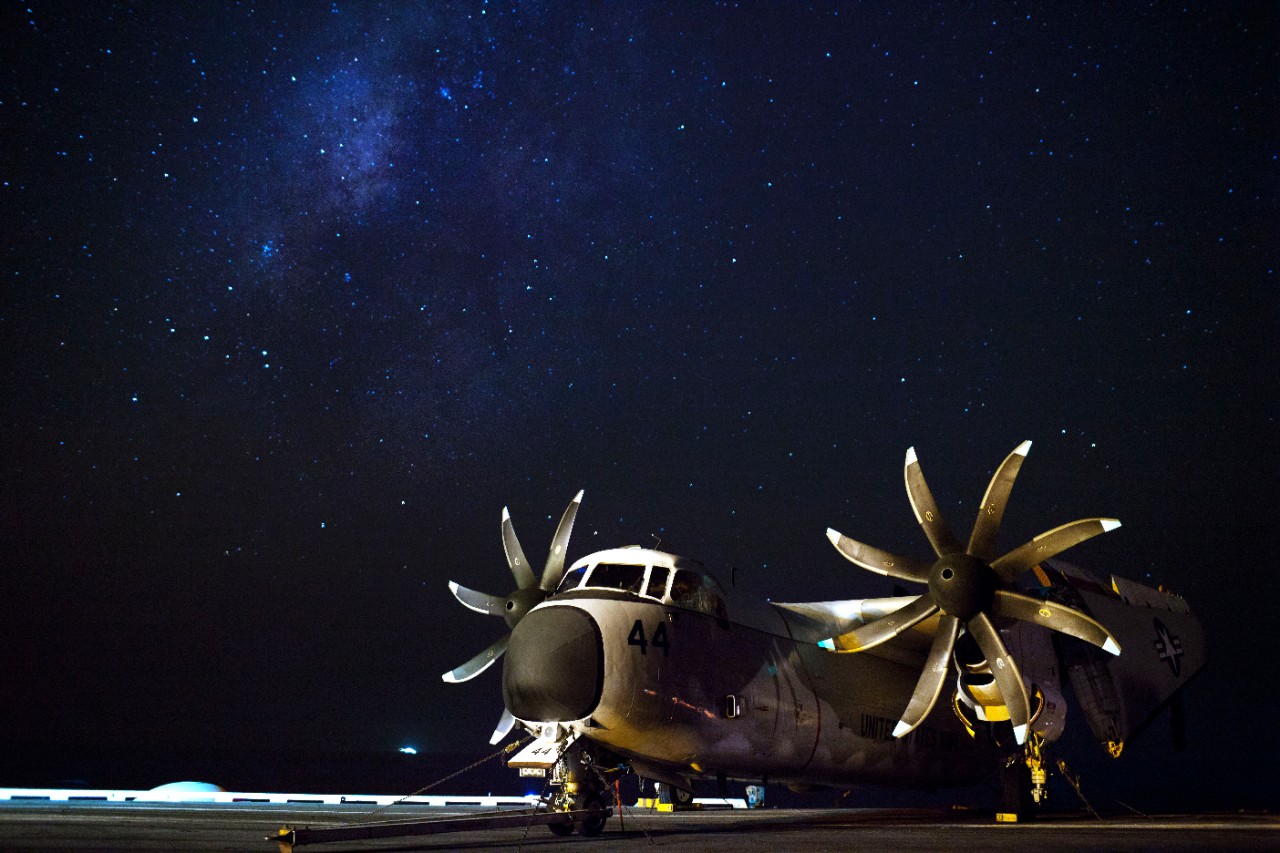 "The C-2A is the life blood of the strike wing of carrier battle groups," said VRC-30 Command Master Chief Shannon Williamson. "We supply people, parts and personnel to the aircraft wing, which is a vital part of a carriers strike group."

Williamson believes that every aircraft has a vital role in our nation's defense. Even if the C-2A does not carry weapons, the C-2A has been very important to the Navy's mission for the past 50 years.

"We don't carry bombs or missiles but we support the carriers and their endeavors," said Williamson. "By us highlighting the 50 year anniversary, it is reminding people of how important our work is in maintaining these aircraft."

Without the hard work from the members of VRC-30, the C-2A would not have had as long a life as it has.

"Fifty years is a major milestone in the history of this aircraft," said Cmdr. Chad White, commanding officer of VRC-30. "It is significant because our Sailors work very hard to maintain the readiness of the aircraft. The hard work they put in everyday has allowed us to reach this milestone and will continue to let us fly this airplane for the next 10 to 15 years."

The mission of aircraft carriers would be negatively impacted if the C-2A aircraft was no longer flown, according to C-2A community members.

The C-2A community may be small, but they provide a vital role that is noticed worldwide according to White.

"35 C-2A's are in existence, and we are the only Navy that operates an aircraft of this type around the world," said White. "It's a very unique mission we fulfill. The aircraft is capable of flying roughly 1000 miles out to ships at sea, providing that last leg of logistics to maintain the readiness of the aircraft carriers and the carrier air wing when they are out on deployment."

This aircraft may be getting older than some of the other aircrafts in the Navy's arsenal, but the Sailors apart of VRC-30 are proud to work with the C-2A.

"There is a lot of pride being a part of the C-2A community within the aviation field, we have incredibly high standards," said Aviation Machinist's Mate 3rd Class Marcel Chacon Galavias. "We are very proud of our aircraft and what we do here, because we transport important goods and parts in a safe manner to help support the mission of the Navy. We might be considered the 'post office' of the Navy, but it is really important, and I think it is really cool to be a part of it."

The C-2A Greyhound has been around since 1964. It has helped provide logistical support to many aircraft carriers throughout the world, and has helped in the success of Navy missions. It has proved to be important not only to aircraft carriers but to those who work on the aircraft everyday. Fifty years is a milestone to be noticed, because this anniversary is about knowing the Navy's history and heritage.

"The C-2A has been a very capable air plane since 1964," said White. "I am very proud of the Sailors of VRC-30 who work very hard to continue to provide the missions that we do."