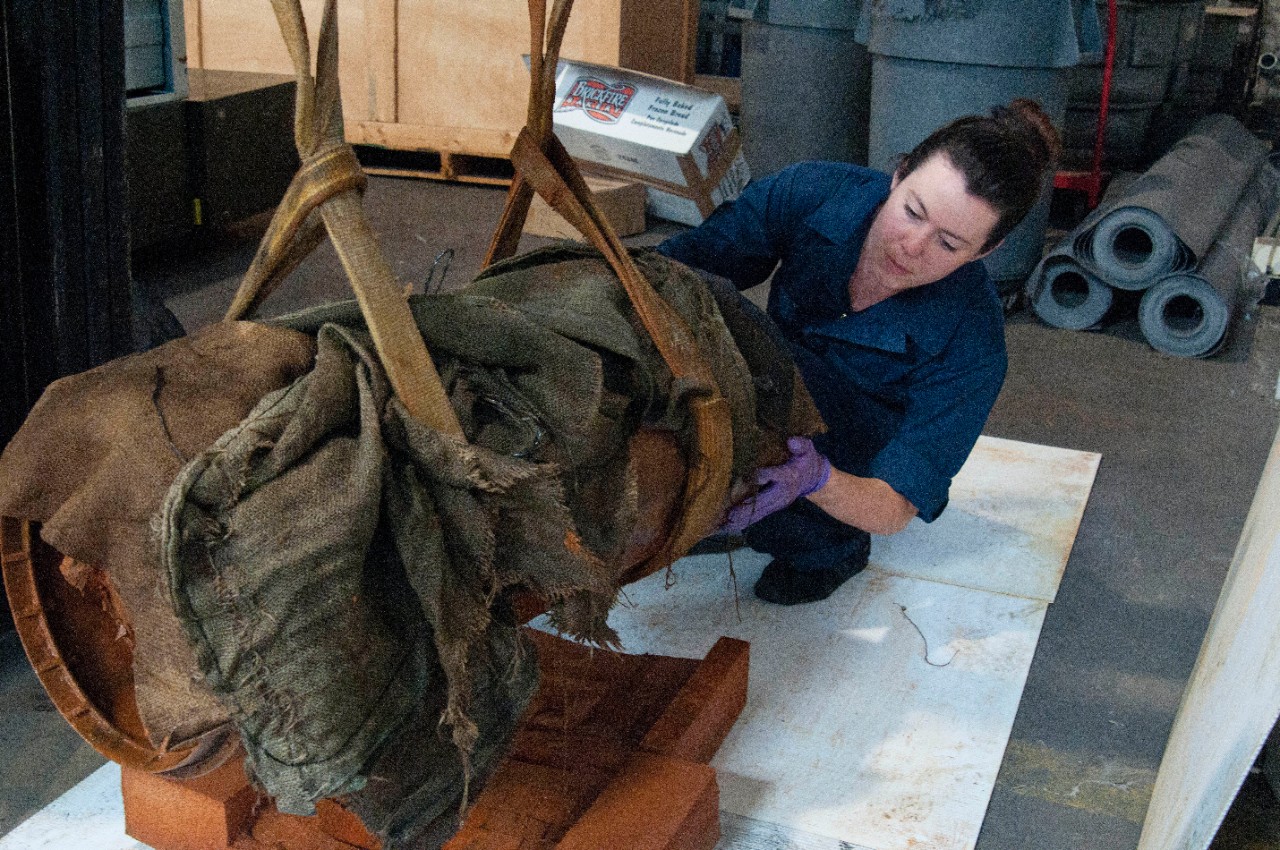 Caption: WASHINGTON (Aug. 16, 2013) Kate Morrand, an archaeological conservator for the Underwater Archeology Branch (UAB) at Naval History and Heritage Command, guides the midsection of Howell Torpedo Number 24 onto foam in the warehouse at the Washington Navy Yard in Washington D.C. UAB discovered deck logs stating that the torpedo was lost by the battleship Iowa (BB 4) during a training operation in December 1899. The torpedo was discovered in March by U.S. Navy dolphins off the coast of San Diego. (U.S. Navy photo by Mass Communication Specialist 1st Class Tim Comerford/Released)

"We started looking through SECNAV (Secretary of the Navy) reports and narrowed it down to eight ships which had been outfitted with Howell Torpedoes," said Mikala Pyrch, a George Washington University intern with UAB who discovered where the torpedo's origin. "From there we figured which ships had gone through the Pacific Fleet or spent any time in California along the coast. That narrowed it down the USS Marblehead and the USS Iowa. We went to the National Archives and looked in the deck logs. I saw that in December of 1899 Iowa had been doing target practice with the torpedoes and had lost... Howell No. 24."

Pyrch was thrilled to find the information, sleuthing was something she never expected to do when she started interning for archeological conservation at UAB.

"I never expected to become a private investigator," she explained. "I didn't ever think that we would find conclusive evidence, I thought we would have a best guess. To see Howell 24, lost on this day, at this time - it was pretty exciting."

The mid and tail sections of this rare torpedo, found by U.S. Navy dolphins off the coast of San Diego last March, make it one of three known to exist. The torpedo was transferred to UAB for desalinization and conservation on the Washington Navy Yard, May 31. That was when the marking "U.S.N. No. 24" was found.

When used in training exercises, Howell torpedoes were fitted with a practice warhead that was attached to the midsection by four pins and a single screw. UAB scientists believe during the exercise, the practice warhead may have detached, providing a possible explanation for why only the mid- and tail-sections of the torpedo were found.

Though the mystery of its firing is solved the torpedo itself still has a long way to go before it is ready to be shown.

"It is a very slow and gradual process," said Kate Morrand, UAB archeological conservator, of the process of desalinating the torpedo for conservation. "We are still seeing that gradual increase of salt concentration in the tank. It is extremely important because if we don't remove those salts we could potentially have new corrosion that forms."

Next they will have to take it apart to preserve its parts.

"We will try to disassemble it as little as possible, but to ensure proper conservation of each of the components - which we are certain, at this point, are made of all different types of material - we will have to partially disassemble it and document it," Morrand said.

As for where it will go after conservation and long-term preservation, that is still up in the air.

"We do not know at this point," said Blair Atcheson, NHHC UAB Historic Preservation and Outreach coordinator. "Our main concern is conservation and getting it stabilized. I am sure several museums are interested. It is an interesting piece with an interesting tale."

USS Iowa (BB-4) was constructed between 1893 and 1896 and participated in the Spanish-American War, most notably in the Battle of Santiago de Cuba July 2, 1898. Iowa was assigned to the Pacific Fleet from 1899 to 1902 to conduct training cruises, drills, and target practice.

The Howell torpedo, named for Lt. Cmdr. John A. Howell, the primary contributor, was developed between 1870 and 1889. The Howell, the first propelled torpedo, was 11-feet long, made of brass and It had a range of 400 yards, a speed of 25 knots, and a warhead filled with 100 pounds of explosive.

For more information about the discovery of Howell torpedo No. 24, visit http://www.history.navy.mil/UnderWater/Howell-Torpedo-Handout.pdf.

For more information about the Naval History and Heritage Command, visit www.history.navy.mil or www.navy.mil/local/navhist/.