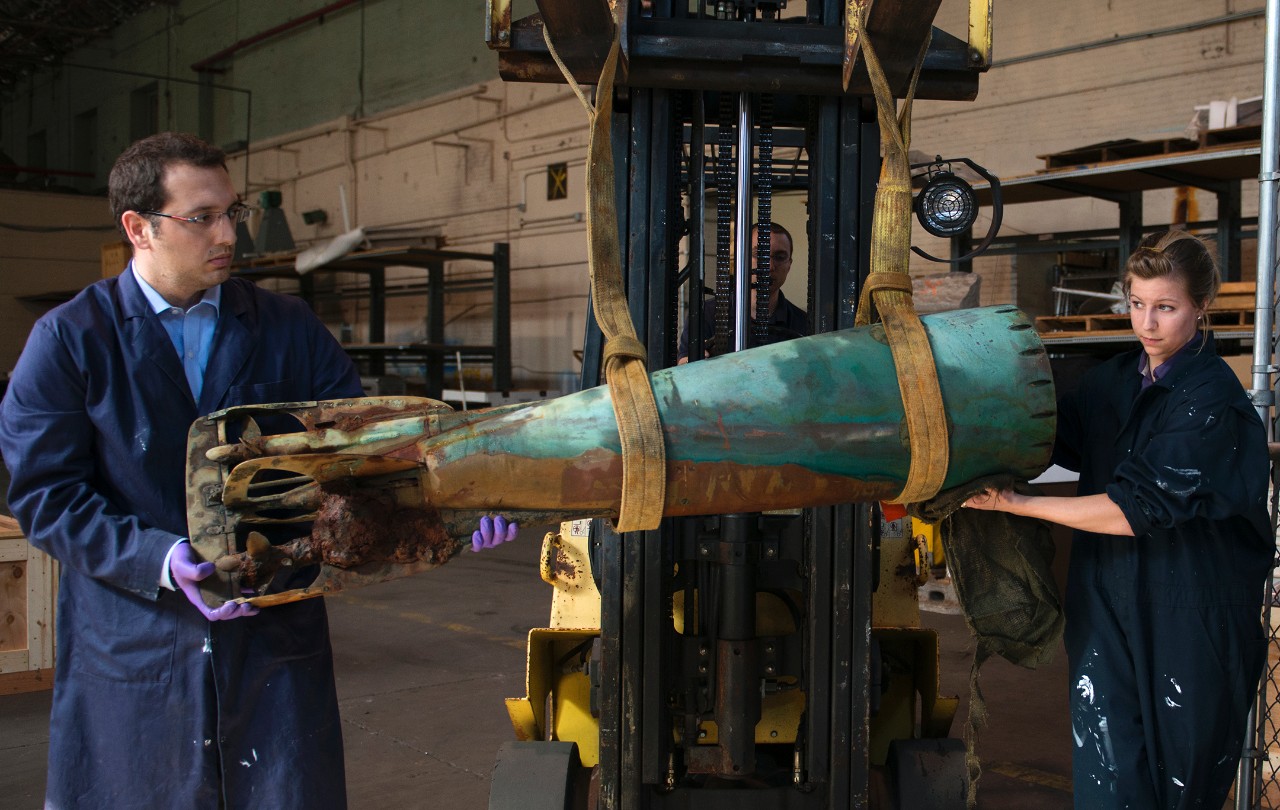 Caption: WASHINGTON (May 30, 2013) Dr. Alexis Catsambis, left, cultural resource manager, and Blair Atcheson, historical preservation coordinator, both from the Naval History and Heritage Command at the Washington Navy Yard, move a late 19th century Howell torpedo. The torpedo was discovered by a team of Navy dolphins off the coast of San Diego and is scheduled to undergo months of restoration by a Navy archaeological team. (U.S. Navy photo by Mass Communication Specialist 2nd Class David Cothran/Released)

The Marine Mammal Program's trained Navy dolphins, of the Space and Navy Warfare Systems Center Pacific (SPAWAR), found the century-old torpedo off the coast of San Diego in March.

"The Howell torpedo was very important in the development of submarine warfare," said Alexis Catsambis (PhD), NHHC UAB archeologist and cultural resource manager. "In the mid-19th century we get the beginnings of propelled submarines and towards the end of the 19th century we start getting torpedoes that extend the range between vessels in battle. By the turn of the century we are looking at over the horizon battles. The torpedoes are sort of the beginning of that phase."

The torpedoes are a rare find and all of the known Howell torpedoes now belong to NHHC museums.

"There were only 50 in existence, and we now have the third one that is still around today," said Blair Atcheson, NHHC UAB Historic Preservation and Outreach Coordinator. "There is one at the Naval Undersea Museum and one at the Naval War College."

NHHC's UAB assists the Director of Naval History and the Department of the Navy in all matters related to the science of underwater archaeology and the identification, research, interpretation, preservation, conservation, inventory, and management of U.S. Navy's historic sunken military crafts.

The Howell torpedo, named for Lt. Cmdr. John A. Howell, the primary contributor, was developed between 1870 and 1889. The Howell, the first propelled torpedo, was 11-feet long, made of brass and It had a range of 400 yards, a speed of 25 knots, and a warhead filled with 100 pounds of explosive.

"We have been coordinating with them and they have been keeping it wet in fresh water for us" said Atcheson.

"They managed to go through the channels and find us. They contacted Dr. Robert Neyland, head of UAB. We were able to talk to them and tell them what to do to preserve the artifact until we could manage to get it to D.C."

NHHC started the process of readying the torpedo for conservation by putting it into tubs of fresh water. These tubs slowly leech out the salt from the artifact. After that, UAB will try to stabilize the artifact, from the different materials that the torpedo is made from, and it could take time to disassemble and then reassemble the torpedo.

"It's kept in water because it was found in a salt water environment," said Atcheson. "If you let artifacts that have been in salt water dry out, they expand. We need to get the salt out, otherwise it will deteriorate the artifact."

The torpedo is an important find for the Navy.

"Our objective is not to rush this, it is to be done right," said Catsambis. "Eventually we will be putting it on display at a Navy museum, potentially the National Museum of the United States Navy. It's that important of a piece."

For more information on Naval History and Heritage Command visit the Command's website at www.history.navy.mil or Facebook at www.facebook.com/USNHistory/ .