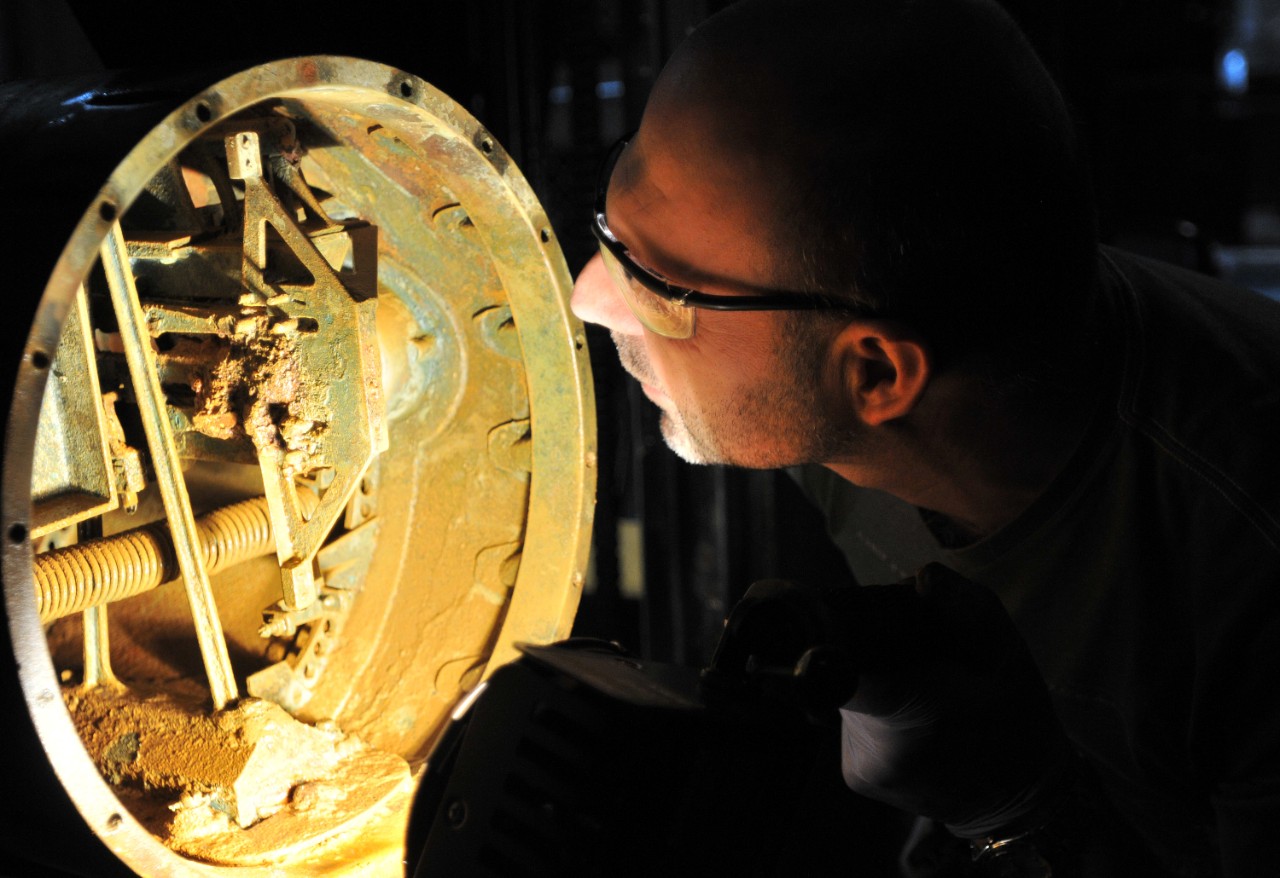 WASHINGTON (NNS) -- Naval History and Heritage Command's (NHHC) Underwater Archeology (UA) opened up the water-filled containers holding parts of a rare Howell Torpedo in a warehouse at Washington Navy Yard in order to develop a conservation plan for the artifact, Dec. 5.

The torpedo, which was embedded in the ocean floor for more than 100 years, requires special conservation treatment in order halt the corrosion process and to restore it to an exhibit-ready artifact.

"We are extremely pleased to be working with both Paul and Claudia," Kate Morrand, archeological conservator for NHHC's Underwater Archeology (UA) said. "They are incredibly experienced conservators with these types of early-modern artifacts that are created from different metals and contain both organic and inorganic materials."

The first step was taking both parts of the torpedo out of the desalinating water bath it has been soaking within since it was found off the coast of San Diego last year. Even though they have copies of the original Howell Torpedo schematics and manual, the conservators began with photographing and documenting the torpedo to better develop the conservation plan. Several unique construction features that are not recorded in the plans have been found inside the torpedo, which may represent continued developments in the design.

"We have to look at it today - that is why rinsing, cleaning and trying to understand what we have, is really critical. You cannot start a conservation project until you really understand what material you are working with," Mardikan, an experienced conservator who has worked on many ocean artifacts including the Confederate submarine H.L. Hunley, the wreckage of CSS Alabama and the RMS Titanic, explained. "We have the original manual for the torpedo - which is great, beautiful Navy records. Even though we trust the Navy, we want to make sure what we find on the object matches what you have on the original manual."

"Based on experience, we know pretty much what the materials are and what the manual has told, but that doesn't mean that it is 100 percent correct, so we want to verify it," agreed Chemello.

But taking the torpedo parts out of the water has its own problems.

"This is a marine object with all its beauty and problems," Mardikian explained. "The beauty is that the materials are still there and it is preserved, the problem is if you let those materials dry for more than two hours they are going to start collapsing and degrading. So you want to make sure that you identify the materials and you identify the cause of degradation and then stabilize them so that it can be displayed in a museum without decay."

Chemello, who is used to working on terrestrial artifacts, artifacts found on land, says both her and Mardikian's skills work well together.

"Paul and I have complementary skills, in terms of wet and dry. Removing salts is the same for terrestrial artifacts as it is for marine artifacts, only marine takes a lot longer," she said.

Once their initial analysis is done, they will develop the conservation plan.

"It will be a fairly lengthy and detailed document where we will talk about the materials we have, any testing we want to do and then the steps needed to stabilize the object," Chemello said. "It will take a number of weeks to put together a plan - we have a pretty good strategy of what we want to do but we need to get it written down and it has to go through the [appropriate] protocols. It will have to be approved by the Navy and SEARCH. Once the plan is approved, we can carry out the plan in stages."

Mardikian feels that the conservation will most likely take about 12 months.

"My goal is to get it done in one year - if we need a little extension we will take it," Mardikian said. "The restricting factor here is not the brass, it is the steel from the flywheel. The flywheel is a massive piece of iron that is going to likely take more time than the rest. That object in itself probably needs to be removed to be preserved separately. If we cannot remove it, it will have to be conserved all together."

During that time, both he and Chemello will come and check on the torpedo's progress.

"We will come to D.C. as often as needed to conserve the object within the timeframe we have chosen - probably once a month," Mardikian explained. "There is a lot of work at the front and a lot of work at the end, in between it is more like a follow up of the treatment."

Morrand is excited to see how they plan to conserve the Howell torpedo.

"I look forward to seeing their ideas on how to move forward with treatment for the artifacts," she said.

The Howell torpedo, named for Navy Lt. Cmdr. John A. Howell, the primary contributor to the design, was developed between 1870 and 1889. The Howell, the first propelled torpedo, was 11-feet long, made of brass, had a range of 400 yards, a speed of 25 knots, and a warhead filled with 100 pounds of explosives.

The mid and tail sections of this rare torpedo, found by U.S. Navy dolphins off the coast of San Diego last March, make it one of three known to exist in the world. The torpedo was transferred to UAB for desalinization and conservation on the Washington Navy Yard, May 31. That was when they discovered a marking on the torpedo, "U.S.N. No. 24".

Further research led to deck logs that indicated the torpedo was launched from USS Iowa (BB-4) during a training operation in December 1899.