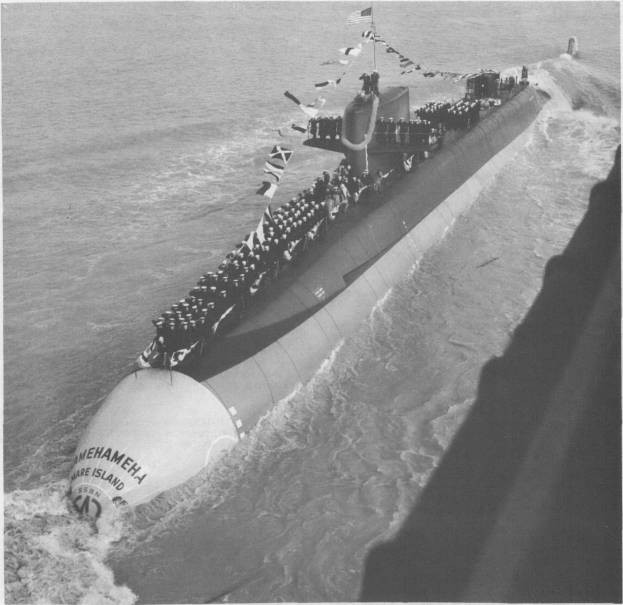 Kamehameha, a Hawaiian king and warrior whose name means "the lonely one," was born at Kohala, Hawaii, in 1758. In 1782 he conquered three petty kingdoms to begin a campaign to take all the Hawaiian Islands. The conquest was completed with the defeat of Kalanikupule on Oahu in 1795. He acquired the islands of Kauai and Niihau without a fight.

At the end of these terrible and devastating civil wars, Kamehameha worked to establish a stable government and to restore the island's shattered economy. An excellent judge of men, he inspired great loyalty. Though ruthless in war, he was kind and forgiving after the fighting. He encouraged trade by insisting upon protection and justice for foreigners. He welcomed new ideas, and tried to apply them to help his people. By the time of his death, Kamehameha had consolidated the islands under one government, ending the feudal wars and anarchy which had ravaged the beautiful Hawaiian Islands.

After shakedown off the Florida Coast, early in 1966, the new Polaris submarine joined the Pacific Fleet and began her first patrol 6 August, silently and invisibly roving the seas as a mighty deterrent against aggression, preserving peace and protecting freedom.

Kamehameha returned from a successful patrol in November, switched crews, and was soon underway again. She continued this pattern of duty in defense of the free world in 1967.