Casimir Pulaski, born 6 March 1745 at Warka, Crown of the Kingdom of Poland and the Grand Duchy of Lithuania [Poland], was the middle of three sons born to Josef and Zielinska Pulaski. In his early 20s, Pulaski joined the Confederation of Bar, a league co-founded by his father to defend Poland from Russian encroachment. During the Polish anti-Russian insurrection of 1768, Pulaski acquired expertise in the use of cavalry and guerrilla warfare. After the Prussian and Austrian invasion of his country in 1772, Pulaski fled to Silesia, Prussia [Germany] and eventually France, where he tried to join the French army. Unable to find employment as a soldier, Pulaski spent much of 1775 in a debtor’s prison. Through the efforts of Claude-Carloman de Rulhière, Pulaski emerged from prison in 1776. Shortly thereafter, the Marquis de Lafayette and American diplomat Benjamin Franklin recruited Pulaski to fight in the Revolutionary War. In a letter to General George Washington, Franklin urged that the general accept Pulaski as a volunteer in the cavalry. Pulaski keenly departed France in June and arrived at Marblehead, Mass., on 23 July 1777. Pulaski met Washington in Neshaminy Falls, Pa., on 20 August 1777. Despite Congress’s refusal to grant him a commission, Pulaski served with Washington as a volunteer. At the Battle of Brandywine, Pulaski helped spot a British attempt to flank the Continental Army and cut off its line of retreat. Given command of an ad hoc cavalry group, Pulaski led a counterattack that allowed Washington and his army to retire safely from the field. Four days later, Congress commissioned Pulaski a brigadier general in the Continental Army. Pulaski resigned his command in frustration in March 1778. Shortly thereafter, he met Gen. Horatio Gates in Yorktown, Va., urging the creation of a new cavalry unit. Swayed by Gates’ support, Congress confirmed Pulaski’s commission as a brigadier general gave him the new title of “Commander of the Horse” and authorized the creation of a corps of 68 lancers and 200 light infantry known as “Pulaski’s Legion.” Ordered to Little Egg Harbor, NJ, Pulaski’s unit suffered heavy losses in the Affair at Little Egg Harbor on 15 October. Some months later, Washington ordered Pulaski and his unit to take part in an expedition against the Iroquois. Once again displeased, Pulaski asked for a reassignment. Washington sent him to South Carolina on 2 February 1779. Pulaski arrived in Charleston on 8 May 1779. Three days later, his corps engaged forward elements of a British force led by Brig. Gen. Augustine Prévost. The encounter shattered his unit and forced Pulaski to retreat. In September 1779, Pulaski’s legion moved to Augusta, Ga., to join forces led by Gen. Lachlan McIntosh and serve as the forward element of Gen. Benjamin Lincoln’s assault on Savannah, Ga. Pulaski’s troops captured a British outpost and then served as a vanguard for French units led by Adm. Charles-Hector comte d’Estaing. On 9 October 1779, Pulaski led a combined French-American cavalry force ordered to assault Savannah. Severely wounded in his leg while trying to rally French troops fleeing a cavalry charge, Pulaski was taken on board the merchant brigantine privateer Wasp. According to the ship’s commanding officer, Capt. Samuel Bulfinch, Pulaski died on 15 October and was buried ashore near Thunderbolt, Ga. Nearly 230 years after his death, on 6 October 2009, President Barack Obama signed a joint Congressional resolution that granted Pulaski honorary American citizenship. 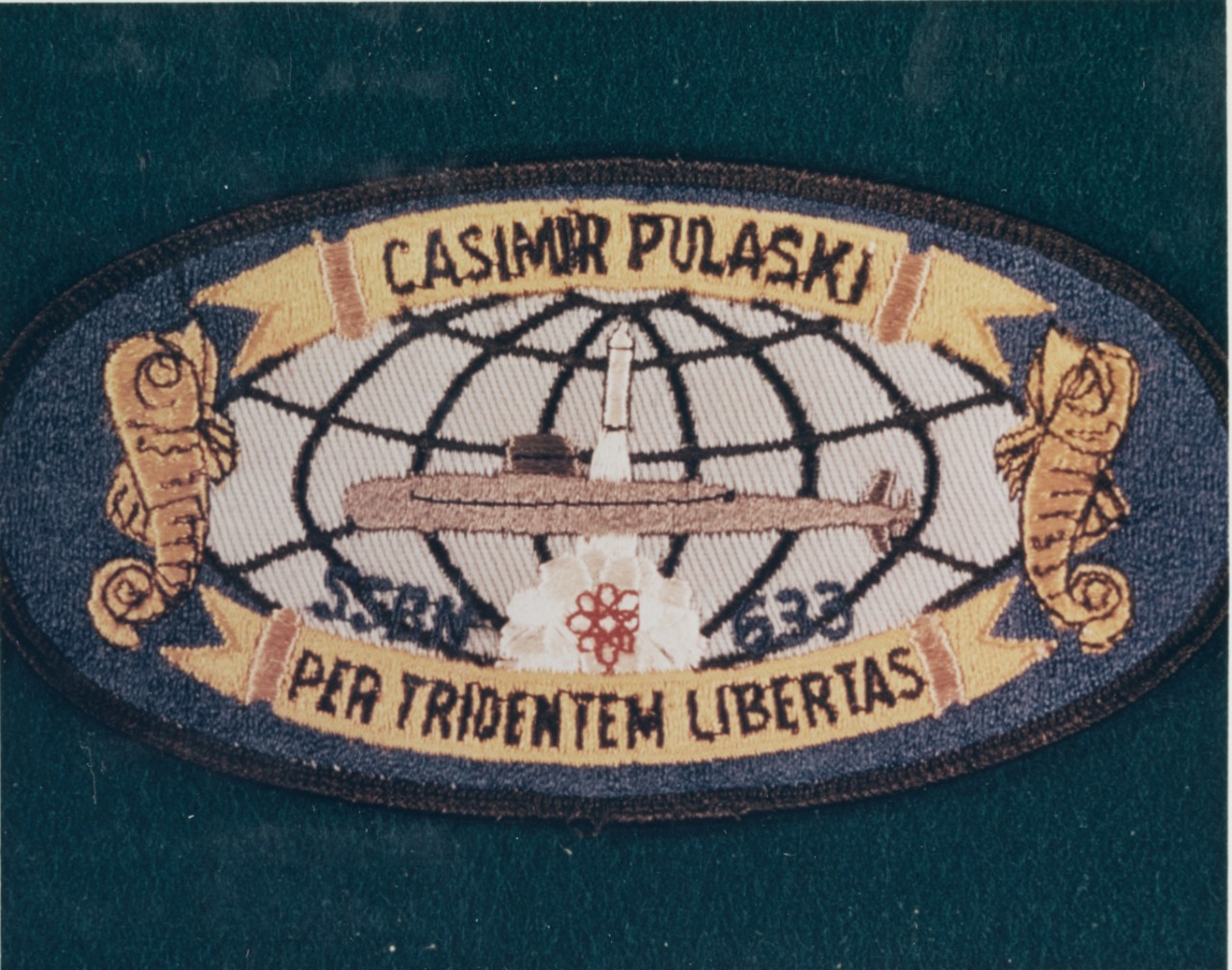 Commissioned at her building yard on 14 August 1964, Capt. Robert L.J. Long (Blue) and Cmdr. Thomas B. Brittain, Jr. (Gold), in command, Casimir Pulaski embarked both her crews and stood out of Electric Boat on a three-month shakedown cruise to the waters off Cape Kennedy [Cape Canaveral], Fla. While off the coast of the Sunshine State, the submarine test fired multiple UGM-27 Polaris ballistic missiles. She completed her shakedown on 5 December 1964, and proceeded back to Groton.

After the submarine’s completion of twenty deterrent patrols, Casimir Pulaski returned to Electric Boat on 5 January 1970 for refueling and overhaul. While in the shipyard, workers refitted the boat to carry UGM-73 Poseidon ballistic missiles. Reassigned to SubRon Fourteen, she stood out of the shipyard and steamed to Holy Loch, Scotland on 30 April 1971. While moored in Holy Loch on 8 June, the boat received the first Integrated Data Acquisition System (IDAS) M-35 set.  During her Demonstration and Shakedown Operations (DASO) on 2 July, her Blue Crew successfully launched a Poseidon missile. The submarine’s Gold Crew followed up with a successful launch of their own on 16 August. Casimir Pulaski returned to the fleet and began her next operational patrol on 28 October.

In July 1974, SubRon Fourteen honored Casimir Pulaski with the first Battle Efficiency, or Battle “E” award ever given to a ballistic missile boat. Later that year, she completed her 50th strategic deterrent patrol.

Casimir Pulaski entered the Newport News Shipbuilding & Drydock Co., for overhaul in late 1980. In addition to routine maintenance and refueling, the submarine was modified to carry the UGM-96 Trident I ballistic missile. Reassigned to SubRon 16, she emerged from the shipyard and proceeded to her new homeport at Naval Submarine Base, Kings Bay, Ga., on 10 December 1982. During her post-overhaul DASO, the boat’s Gold Crew successfully launched a Trident I missile on 19 April 1983. The submarine returned to the fleet and began her next deterrent patrol on 3 June.

The final year of the decade proved to be very successful for Casimir Pulaski. From 1 April–20 May 1989, the submarine participated in LANTCOOPEX 1-89 in the waters off Cape Canaveral, Fla. Following the conclusion of the exercise, both of the submarine’s crews received a Letter of Commendation from Secretary of the Navy Henry L. Garrett III. Later that fall, SubRon 16 awarded the submarine with a Battle Efficiency, or Battle “E” award. Furthermore, in November the boat’s Blue Crew received the Humanitarian Service Medal for their actions in response to Hurricane Hugo, which caused widespread damage in the Caribbean and the southeast United States.

In May 1993, Casimir Pulaski completed her 88th and final deterrent patrol. She returned to Kings Bay on 23 July, combined her two crews, and transferred to the Pacific Fleet in preparation for her inactivation and decommissioning.

The Navy decommissioned Casimir Pulaski and struck her from the Naval Vessel Register on 7 March 1994. Disposal of the ex-Casimir Pulaski via the Ship and Submarine Recycling Program completed on 21 October of that year. 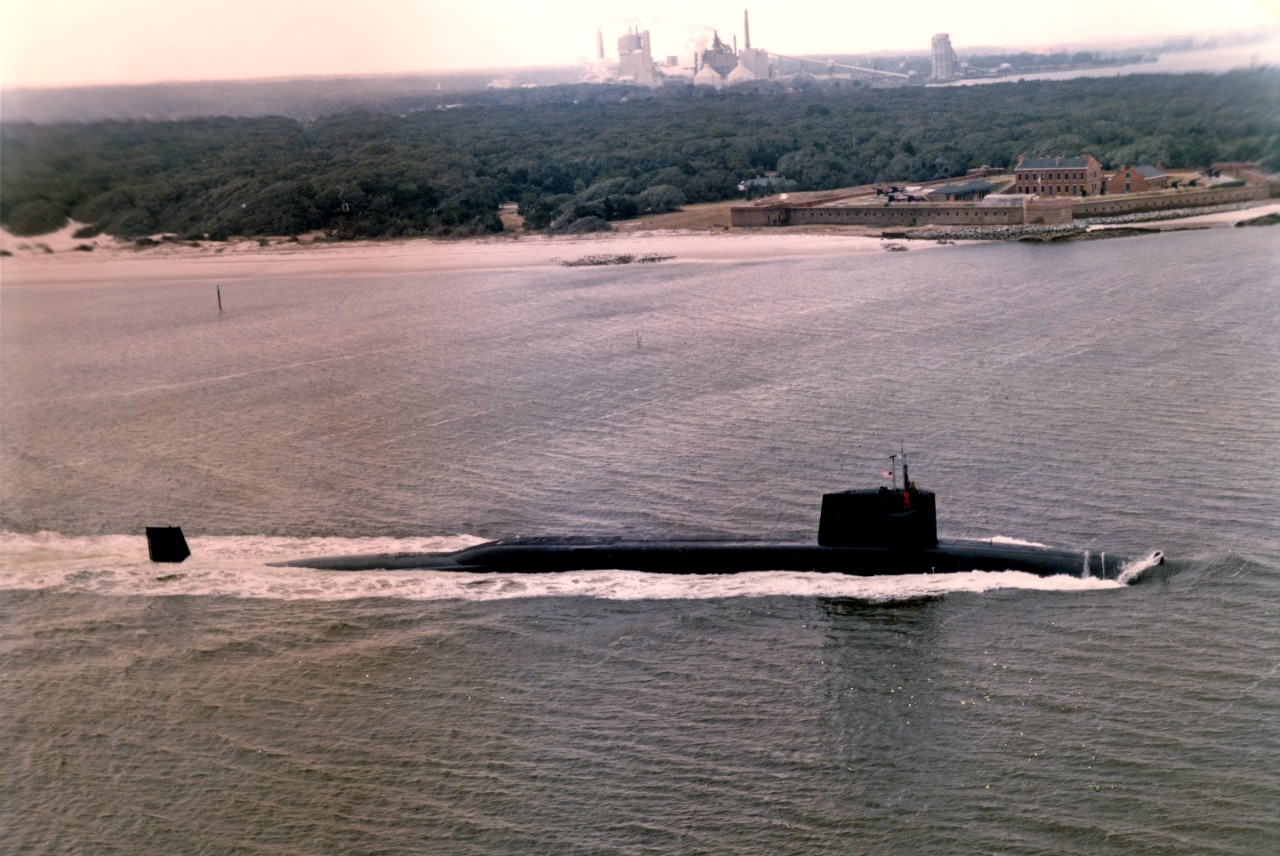