Decorative sword presented to Lt. John Rodgers from the Governor-General of Siberia, 1855.

In June 1853, USS Vincennes (1826) and four other vessels set out from Norfolk, VA on the second exploratory expedition survey of the China Sea, the North Pacific, and the Bering Strait. In March 1854, Lieutenant John Rodgers, aboard Vincennes, replaced Commander Cadwalader Ringgold as the leader of the expedition. The expedition extended from the Ladrones Islands (Marianas) in the western North Pacific Ocean to the Kuril Islands north of Japan, using Hong Kong as a base of operations. In 1855, Vincennes left the squadron at Petropavlovsk, Russia to sail for Wrangel Island via the Bering Strait. Ice packs prevented the ship from reaching the island, forcing it to turn back. The squadron arrived in San Francisco, CA in October 1855 before continuing around Cape Horn to reach New York in July 1856, thus completing another circumnavigation of the globe. 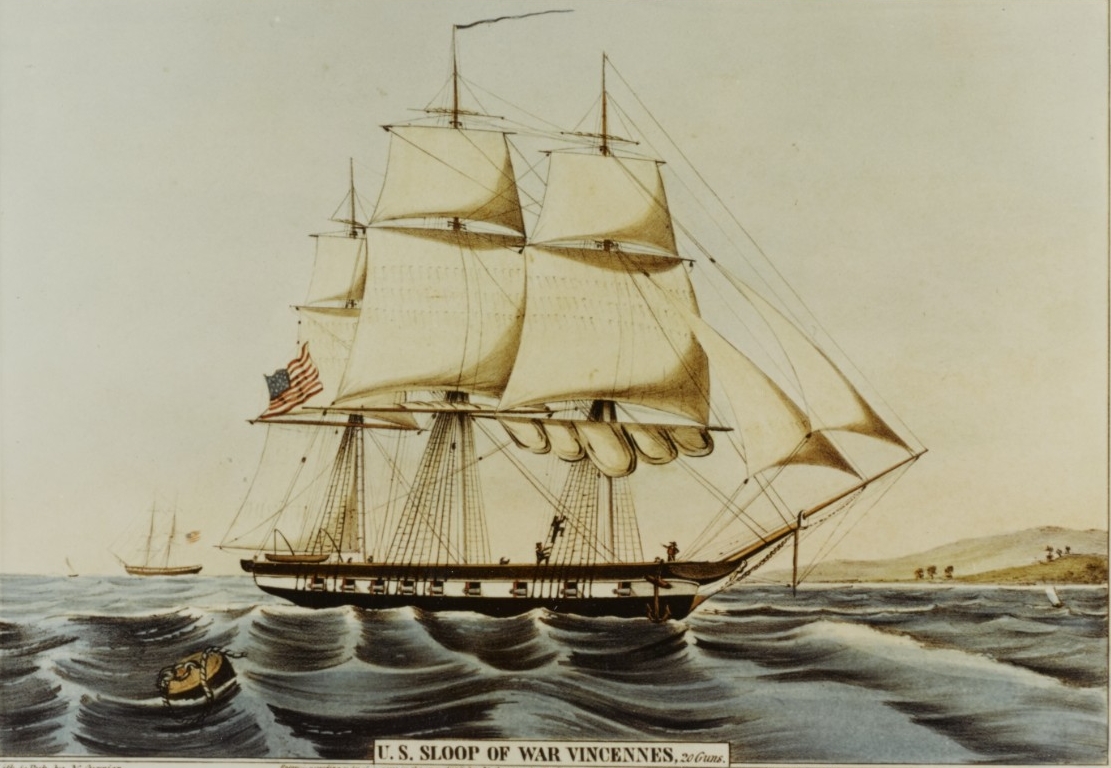 Upon Rodgers’s arrival in San Francisco, he was greeted with a surprising gift via the Russian Consul. A fine steel sword with a silver hilt cast in the shape of an American Indian battling two panthers. Accompanying the sword was a scabbard decorated with a silver locket and chape. On the reverse of the locket is an engraving, “Presented by / Gen Mouravief / Governor General of / Siberia / To / Lieut/ John Rodgers USN / Comdg U.S. Survey / Expedition.” As revealed by the inscription, this sword was gifted to Rodgers by Nikolay Nikolayevich Muravyov-Amursky (sometimes spelled Mouravief), Governor-General of Siberia. It was most likely during the 1855 stop over in the Russian port of Petropavlovsk, in Kamchatsky, that Rodgers came into contact with the Governor-General. 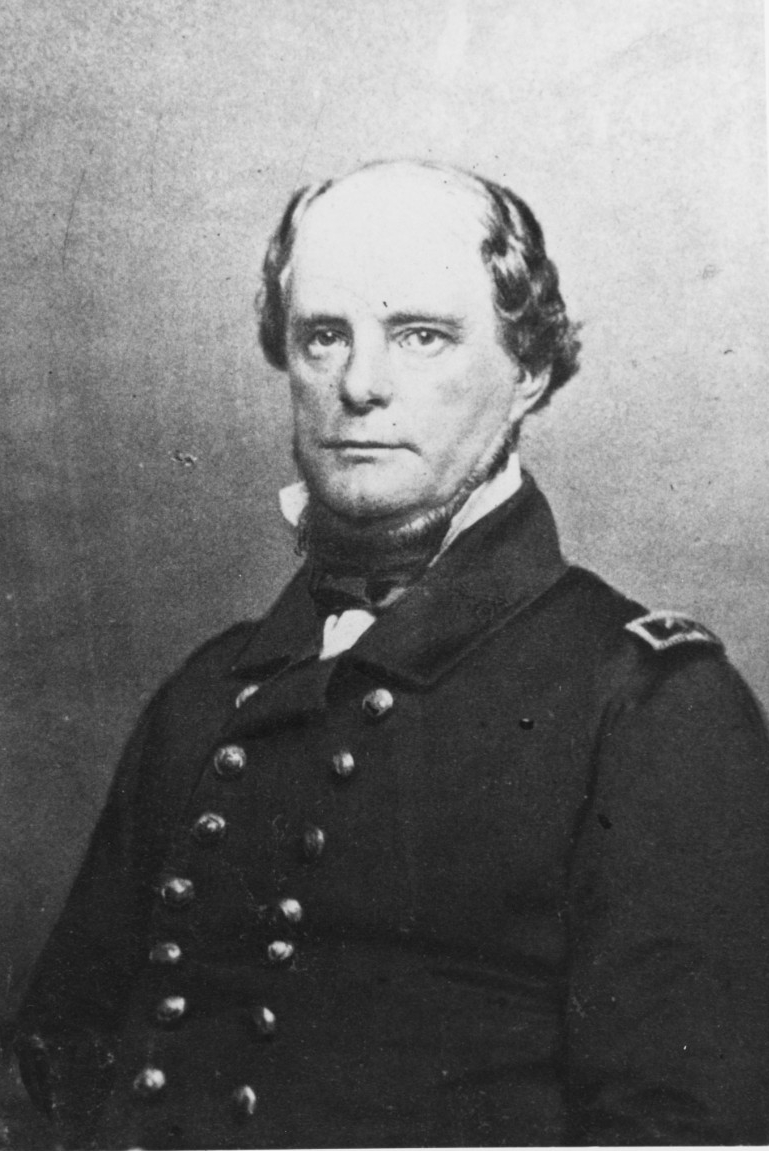 The sword has a straight, double-edged blade that tapers to a spear point. There are three fullers down the center of the blade. The hilt is cast silver, shaped in the form of a Native American man standing with his right foot on an injured mountain lion while stabbing a second mountain lion with his right hand. The Native American is holding the mountain lion's head away with his left hand while the animal is scratching his face. The Native American is bare silver while the panthers have a gold-wash. The scabbard is wood covered with black fabric, possibly silk. It has a silver locket and chase. The obverse locket has a stud cast in the shape of a bear head. The rest of the locket has etchings in the shape of large leaves. Two emanate from below the bear’s head and curve into a heart above the bear’s head. There is a geometric design of a face below the bear head followed by a large leaf that is flanked by clusters of corn. On the reverse of the locket is the above mentioned inscription. The chape is decorated with four leaves and a rounded cluster of foliage at the tip. 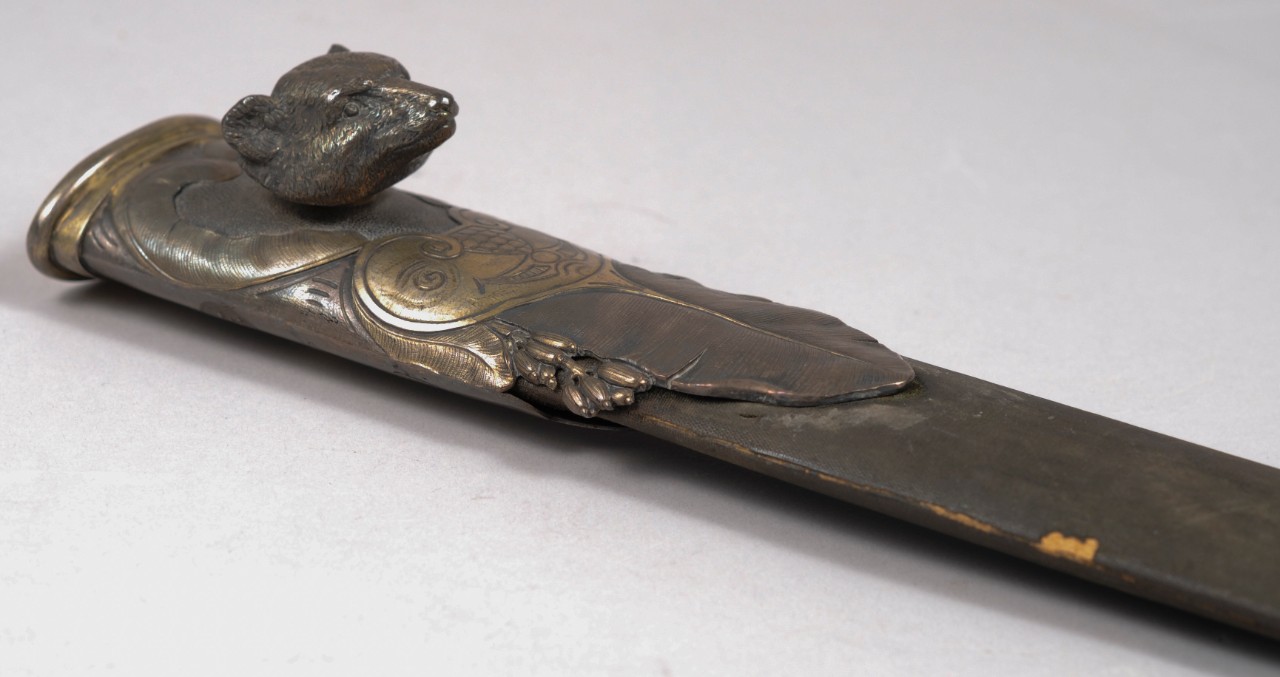