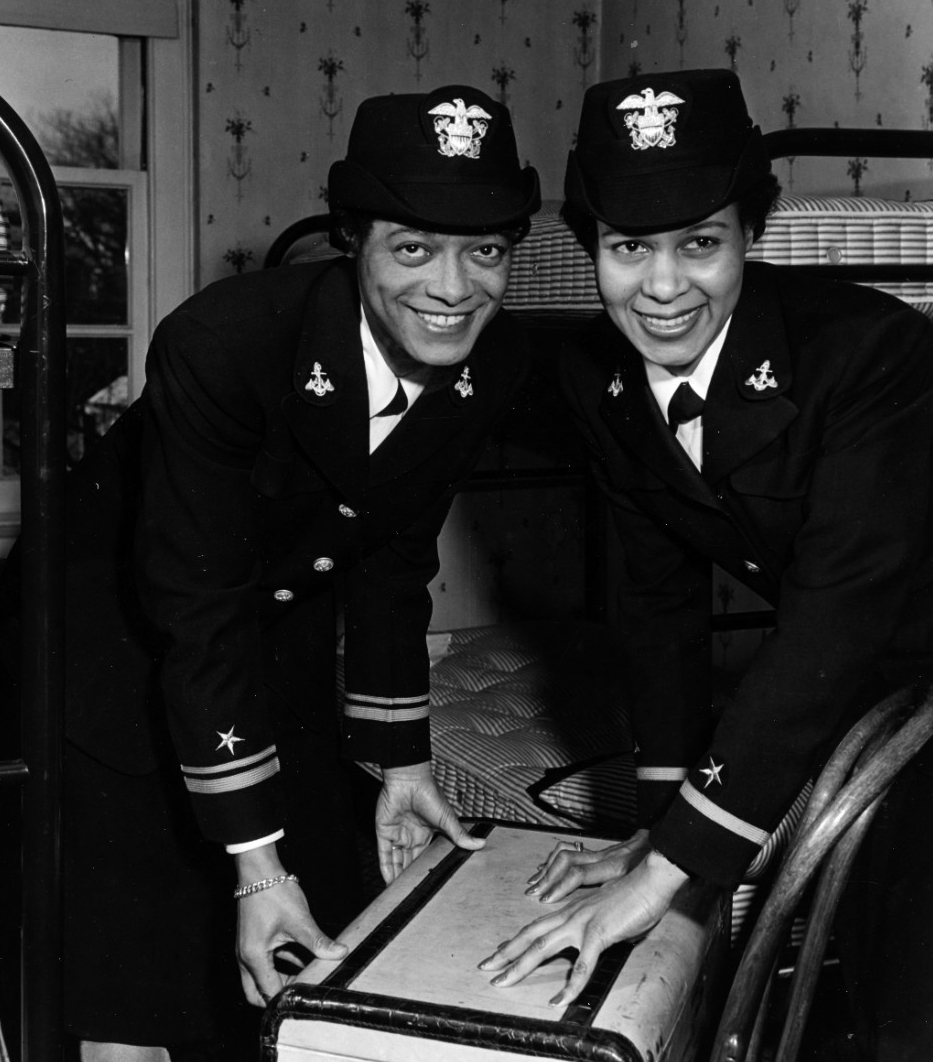 How did it happen so late in World War II and under a national cloud of racial tension and persistent discrimination that a pair of African-American women managed to accomplish the seemingly impossible—that is, enter the WAVES as officers in spite of an increase in racial strife during the latter half of the war?

The answer is a complex but inspiring story of the determination of African Americans to achieve equality. As NHHC historian Regina Akers has demonstrated, the commissioning of Pickens and Wills was in large part the direct result of African-American persistence in face of discriminatory practices throughout American institutions, including the Navy.[3]

Although the establishment of the WAVES righted a particular wrong (the Naval Reserve Act of 1938 had barred women from the Naval Reserve), it perpetuated discrimination in other ways, particularly with respect to race.

Public Law 689 (30 July 1942), which amended the Naval Reserve Act of 1938, sanctioned the inclusion of women in the Naval Reserve. The rationale was to “expedite the war effort by releasing officers and men for duty at sea and their replacement by women in the shore establishment of the Navy,” according to the law itself.

In civilian life already, women were replacing men in war industries, thereby accelerating and facilitating the mass mobilization demanded by the entry into World War II.[4] Public Law 689 extended that practice to the Naval Reserve and followed on the heels of the establishment of the Women’s Auxiliary Army Corps six months prior.

Yet Public Law 689 was discriminatory on a fundamental level. The rationale for the law suggested the temporary and extraordinary parameters of women’s inclusion in the Reserve, while the law itself issued a litany of restrictions and double standards:

The most profound of all discriminatory practices emerged after the law passed, however: Like so many other American institutions, the WAVES, lacking any order to admit African Americans, excluded them by default.

Even before the U.S. entry into World War II, African-American men were trying to enter the services as recruitment increased after the outbreak of World War II in 1939. In the summer of 1940, thousands of African-American men attempted to join the Navy, which nonetheless restricted them to the lowliest billets.[6] A “right-to-fight” movement sprang up as a result, but discrimination persisted into the war years, when military and private industry leaders tried to curtail African-American involvement in the war effort.[7]

Nevertheless, the exigencies of war demanded an all-hands effort, and neither the military nor industry could afford to refuse the contributions of African Americans, who eventually availed themselves of the opportunities that mass mobilization occasioned.[8]

Pressure from African-American rights organizations ultimately succeeded in persuading the Navy to allow African-American men to serve as Seabees and for general shore duty by 1942, but the officer corps remained off limits.[9]

Behind the scenes, African-American rights organizations campaigned for an end to the indignities, especially the elimination of discriminatory legislation and practices with respect to the armed forces—including the Navy. As early as May 1942, African-American leaders were appealing to the Senate Naval Affairs Committee to draft legislation forbidding racial discrimination in the Women’s Reserve, but to no avail. When Public Law 689 passed later that year, several dozen African-American women tried to enlist in the WAVES. The Navy barred their entry.[10]

Historian Maury Klein notes that racial prejudice “simply festered in the background” in the first part of the war but “burst forth in all its ugliness” in 1943.[11] The imprisonment of so many Japanese Americans, the increasing violence against Hispanic Americans, and the continued persecution of African Americans constituted a wave of white supremacy that was as deplorable as it was detrimental to the war effort.[12] Racial strife only increased in 1944 and resulted in further injustices against African-American service members in the summer and fall of that year, when a Navy court martial ruled against 50 African-American Sailors who had taken a stand against unequal treatment in the context of the Port Chicago magazine explosion.

Secretary of the Navy William F. Knox himself was a determined opponent of African-American advancement, though eventually the NAACP (National Association for the Advancement of Colored People) and others, including Eleanor Roosevelt, persuaded him to allow the admission of African-American men to the Navy’s officer corps in early 1944.[13]

Only with Knox’s death in April 1944 did African-American women get their turn. And yet, as Akers points out in her work on the integration of the WAVES, there were several other factors that produced the first female African-American officers:

Therefore, on 19 October 1944, with the President’s authorization, the Navy announced the decision to integrate its female reserve program.

The first African-American WAVES reported for training on 28 December 1944 at Hunter College in New York City. Coming from the North and the South—Minnesota, Massachusetts, Illinois, New York, Georgia, and Alabama—the first recruits entered on a fully integrated basis.[15] In early 1945, they reported to integrated duty stations across the country. By all accounts, the Navy refused to tolerate any backlash from white WAVES, the more vocal of whom were forced out of the service entirely with “neuropsychic discharges.”[16] Still, instances of hostility and everyday indignities came and went with some frequency.[17]

By 1944, when she joined the WAVES, Harriet Pickens already had an impressive record, especially considering the opposition and hostility African-American women faced in making careers for themselves in the 1930s and 40s. Pickens had been born in Talladega, Alabama, to distinguished parents: Her father had been one of the founders of the NAACP. She completed her undergraduate degree at Smith College, in Massachusetts, before pursuing further study at Columbia University and Bennett College for Women in Greensboro, North Carolina. In 1934, she became the supervisor of a large-scale recreation program maintained by the Works Progress Administration for the Juvenile Aid Bureau of the New York City Police Department. After four successful years in that capacity, Pickens accepted the position of executive secretary in the Harlem Tuberculosis and Health Committee, a public health organization that attended to some of her city’s most formidable challenges.[18] As a Naval Reserve Officer, Pickens would use her expertise and experience to organize and administer physical training to enlisted WAVES.

Frances Wills had a similarly impressive career, as social worker. She decided to join the WAVES upon seeing in the paper that the service was now open to African-American women. Already an accomplished professional, with degrees from Hunter College and the University of Pittsburgh, as well as several years’ experience in the employment department of the YMCA and elsewhere, Wills would be an ideal officer candidate.[19] As a Naval Reserve officer, she would be responsible for job training and selection for enlisted WAVES.

Both women were sworn into the Navy on 13 November 1944 and sent immediately to join other (white) officer candidates at the training station on the campus of Smith College, where Pickens and Wills managed to catch up with their classmates, who were already a week into their studies.[20]

Their training complete some five weeks later, Pickens and Wills earned their commission as the Navy’s first female African-American officers on 26 December 1944. Although their options for advancement remained limited by the expectations and prejudices of the Navy leadership and the American public more generally, Lieutenant (j.g.) Pickens and Ensign Wills became the first in a long line of female officers and enlistees who, gradually, came to enjoy greater and greater purviews. Edna Young, for example, one of the wartime WAVES enlistees, became one of the first women to enter the regular Navy, in 1948, and the first African-American woman to do so.

The demands of World War II drew African-American women to the services, including the Navy, and animated African-American rights organizations to campaign on their behalf. This process and others like it generated the momentum that eventually produced the Civil Rights movement of the 1950s and 1960s, which in turn precipitated further integration of the Navy and other institutions.

The integration of the WAVES and the commissioning of the first female African-American officers—Lieutenant (j.g.) Harriet Pickens and Ensign Ida Wills—were the result of efforts toward racial and gender equality that persist to the present and continue to inspire reform throughout the Navy, the Department of Defense, and American society at large.

[5] Public Law 689 (H.R. 6807), “An Act to expedite the war effort by releasing officers and men for duty at sea and their replacement by women in the shore establishment of the Navy, and for other purposes,” 77th Congress, 2nd Session, July 30, 1942, available for download at https://www.loc.gov/law/help/statutes-at-large/77th-congress/session-2/c77s2ch538.pdf.

[9] Ebbert and Hall, Crossed Currents, 93–94. It was possible, however, to advance to the petty officer corps of the Navy. The Marines, for their part, admitted African Americans in 1942 but still barred them entry to the officer corps. See Klein, Call to Arms, 611.

[15] Akers, “Integration,” 72; Cf. Bureau of Naval Personnel, “The Negro in the Navy,” part of the series United States Naval Administration in World War II, the first draft of a narrative prepared by the Historical Section of the Bureau, undated but probably before 1947 (available on microfilm at the Navy Department Library, Washington, DC), 98.

[16] Akers, “Integration,” 70. The designation of women as unsound of mind, however, was itself a form of gender-based discrimination—a catchall category for women whose stated views or demonstrated behaviors contradicted the mainstream. See Phyllis Chesler, Women and Madness (New York St. Martin’s, 2005), first published in 1972. 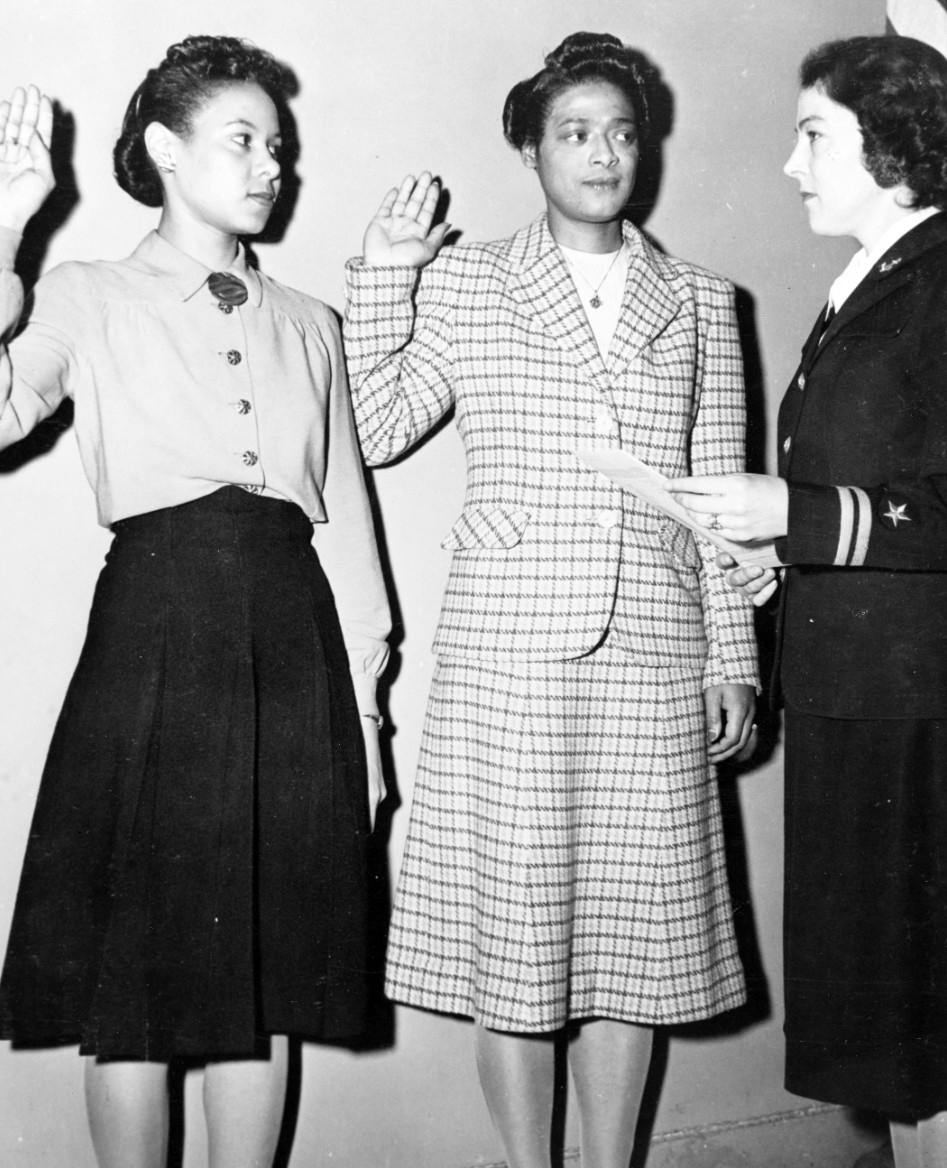 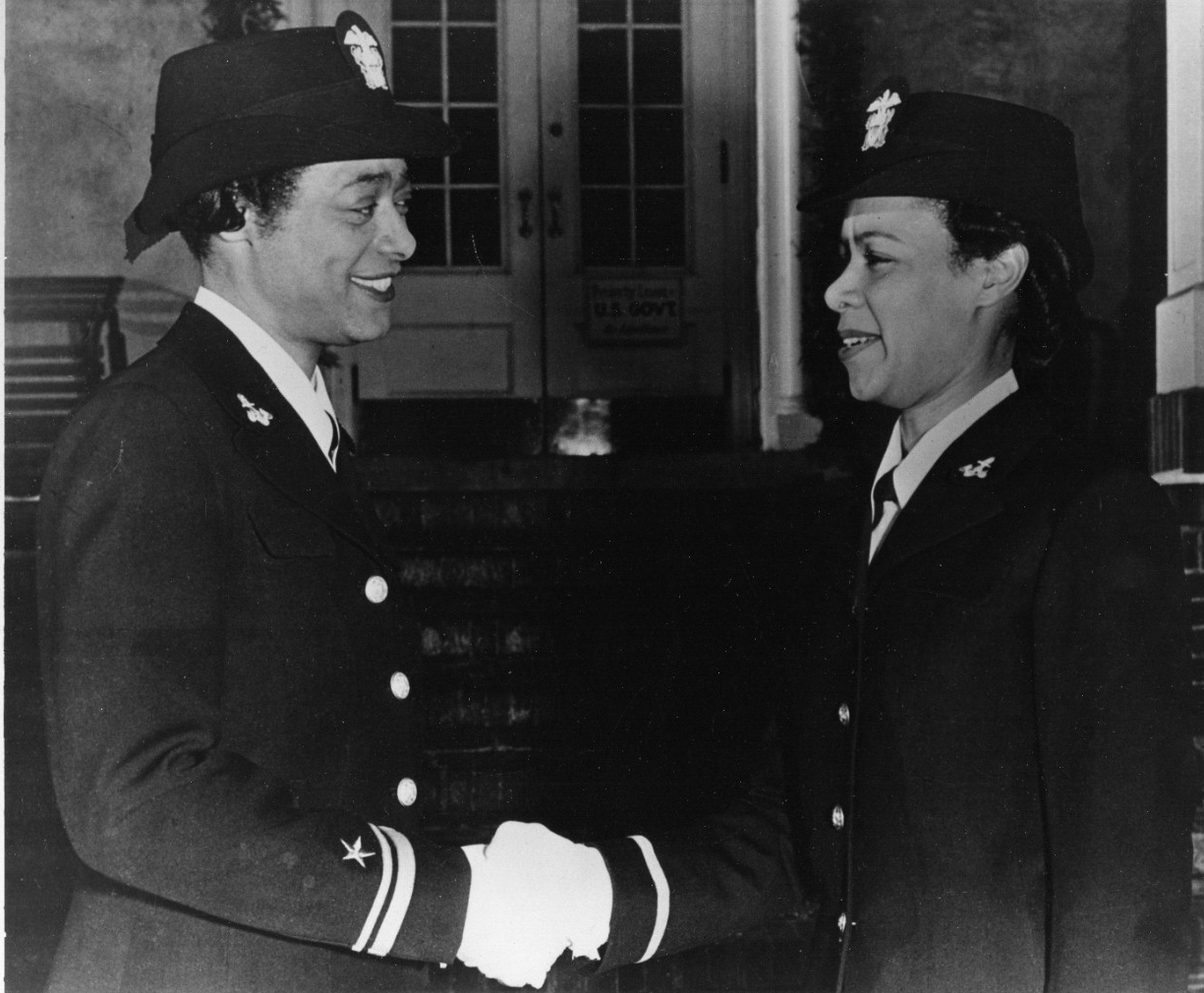 Lieutenant (Junior Grade) Harriet Ida Pickens (left) and Ensign Frances Wills congratulate each other after being being commissioned as the first African American WAVES officers, December 1944. They were members of the final graduating class of the Naval Reserve Midshipmen's School (WR) at Northampton, Massachusetts. U.S. Naval History and Heritage Command photograph. Catalog#: NH 90006 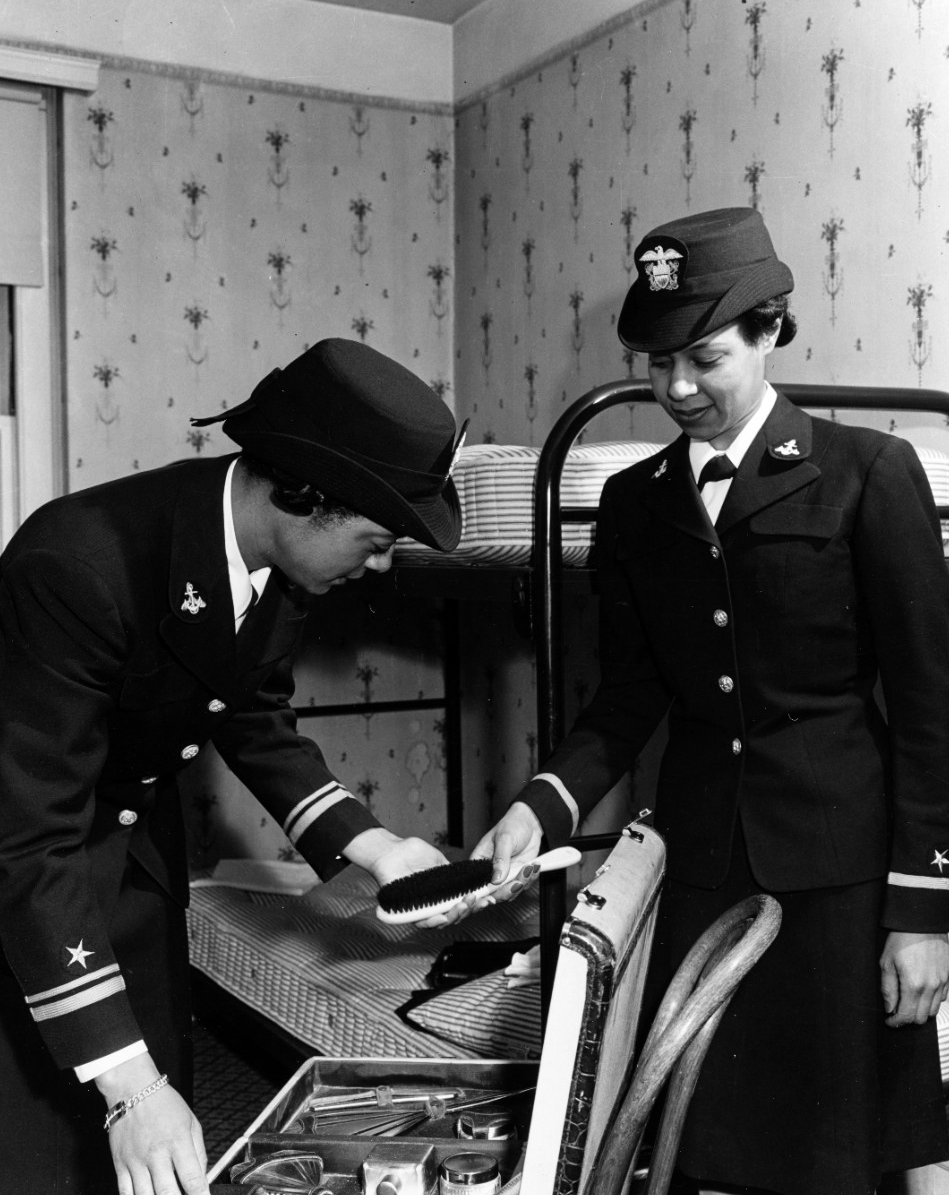 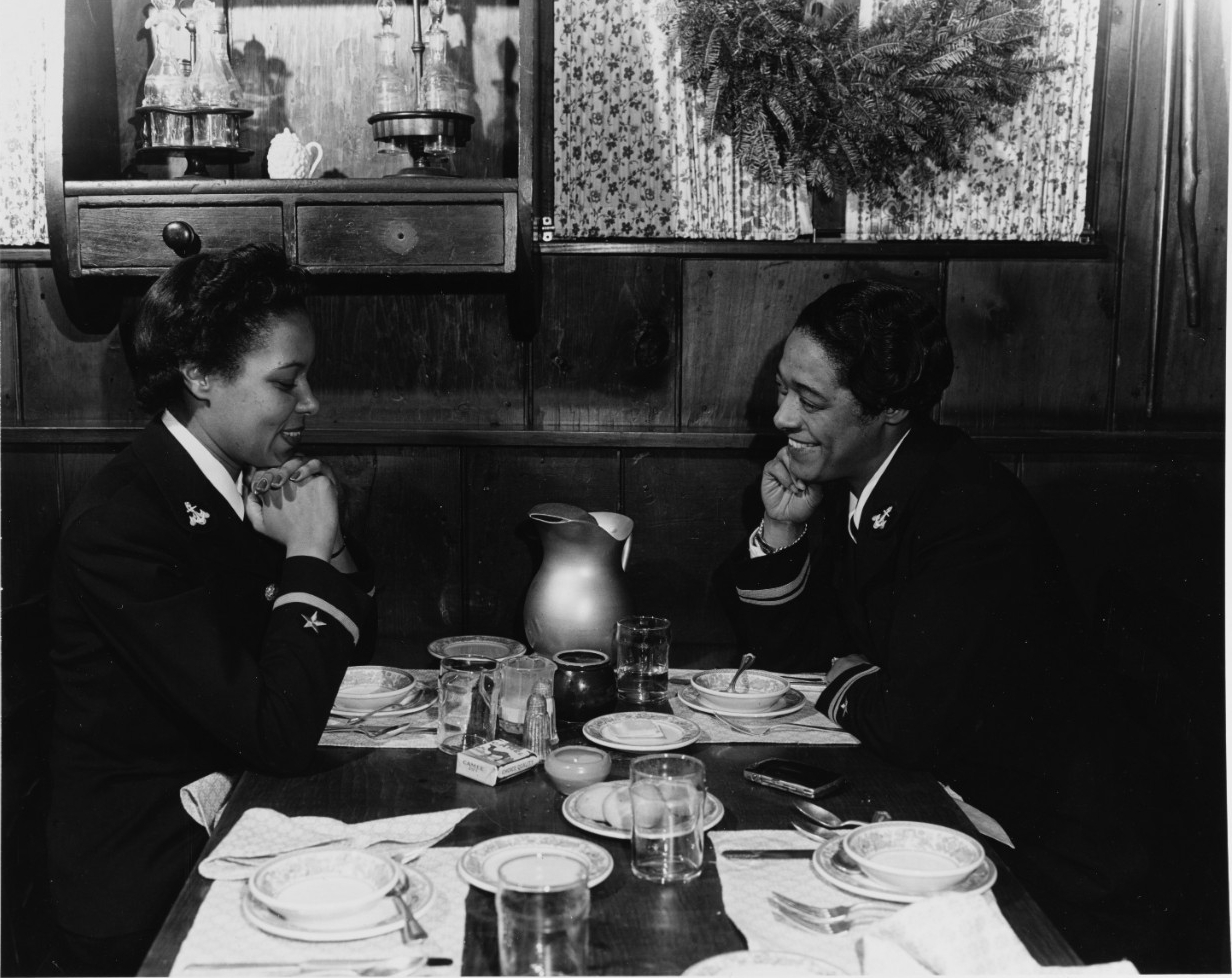