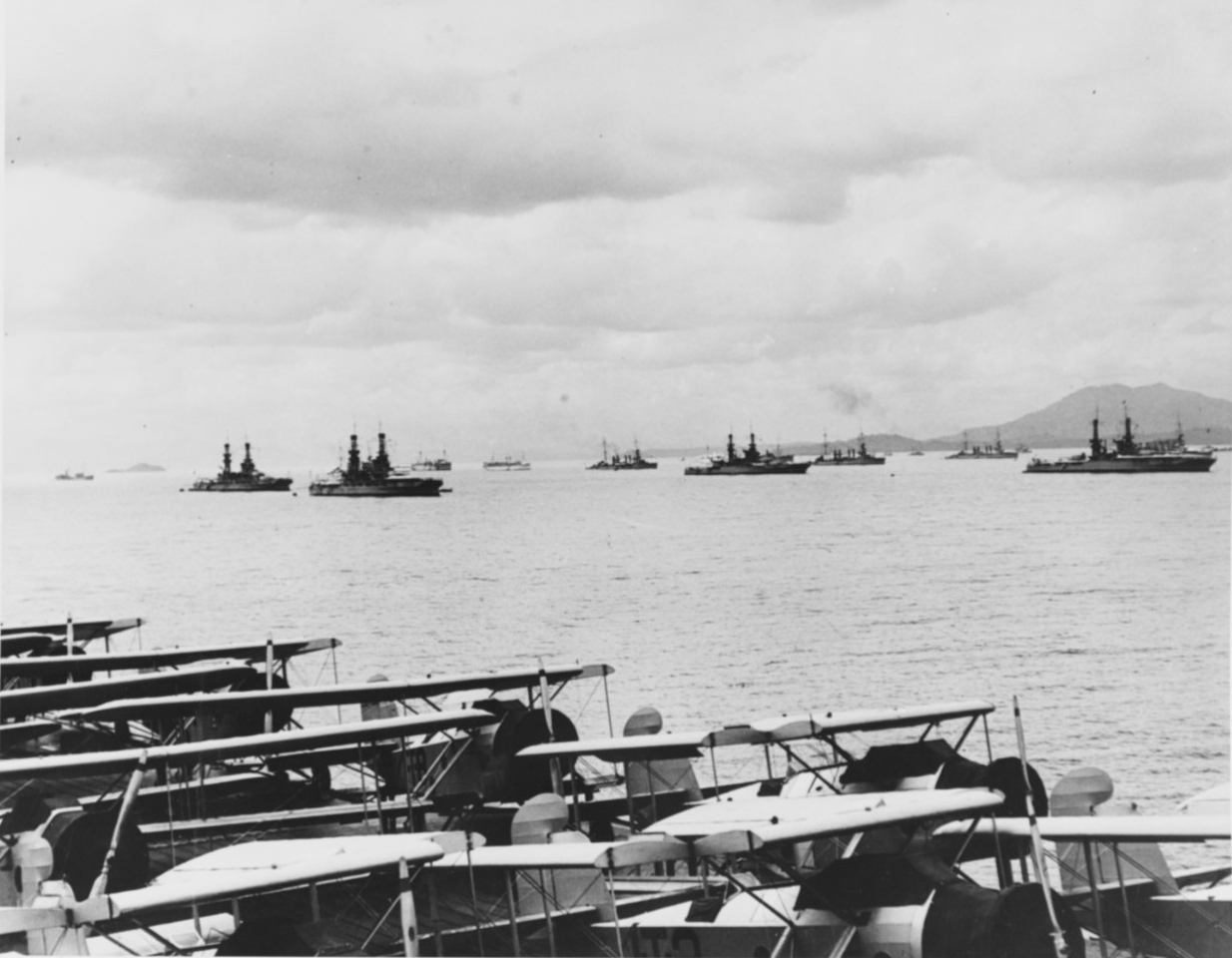 Battleships and other ships of the U.S. Fleet at anchor in Panama bay on 26 February 1929 at the completion of that year's fleet problem. Photographed from USS Lexington (CV-2). Aircraft are Martin T4M-1 torpedo bombers (NH 75711).

During the period between World War I and World War II, the U.S. Navy conducted Fleet Problems to test the plans, operations, tactics, and capabilities of the Navy. Fleet Problem IX, which took place in January 1929, was one of the most significant as it was the first to test the concept of an independent carrier task force. Naval aviation was a rapidly evolving technology, and the fleet carriers, used for the first time in this problem, were an emerging capability. The exercise demonstrated the great potential for independent carrier operations, but also exposed the significant vulnerabilities of the carrier task force.

The problem must be examined in the context in which it took place to understand its significance. After World War I, the Navy continued a prewar building program based on battleship and battle-cruiser construction. The 1922 Washington Naval Treaty limited the size of the world’s five major navies, those of the United States, Britain, Japan, France, and Italy. The U.S. building program largely came to a halt, and some already-existing battleships were scrapped. The treaty limited the amount of aircraft carrier tonnage as well, but it did allow the United States and Japan to convert two of their partially built battle-cruisers or battleships to aircraft carriers. The U.S. Navy faced another challenge in the 1920s: greatly reduced funding. After World War I, Republican Congresses and administrations sought to lower naval expenditures. This reduced the ability to buy aircraft and build new ships that were not limited by the treaty, and slowed the reconstruction of the two battle-cruisers being converted to carriers, Lexington (CV-2) and Saratoga (CV-3). These ships were not commissioned until late 1927.

The two carriers were massive, each with a standard displacement of over 33,000 tons, armed with eight 8-inch guns, carrying over 80 aircraft, and, because of their battle-cruiser engineering plant, the ability to make 33 knots. The Navy’s only other carrier, Langley (CV-1), was a converted collier that was essentially an experimental platform. However, when commanded by Captain Joseph M. “Bull” Reeves, Langley became a more operationally capable ship through his changes in deck loading and by increasing the tempo of flight operations. Some of the longer-serving aviators thought these changes were dangerous, but Reeves, who only qualified as a naval aviation observer (the equivalent of an NFO today) as a captain, showed it could work. Reeves’ changes became the basis for all U.S. carrier flight operations. By late 1928, both of the big carriers were ready to participate in the upcoming Fleet Problem, but Langley suffered a major engineering breakdown just prior to the exercise and could not participate.

The Fleet Problems were very large operations that included most of the Navy’s major combatants. Fleet Problem IX included 67 percent of the carriers, 72 percent of the battleships, 38 percent of the cruisers, 68 percent of the destroyers, 40 percent of the submarines, and over 52 percent of the Navy Department’s first-line combatant aircraft, which included planes assigned to the Marine Corps (although no Marine Corps aviation units were part of the exercise). This large-scale participation was possible because very little of the U.S. Navy was forward-deployed, so forces could be brought in from the East and West Coast bases. Fleet Problem IX involved the Blue Force defending the Pacific side of the Panama Canal while the Black Force had the objective of disabling the canal. Each force had one of the big carriers. The Blue Force also had three aircraft tenders supporting amphibious patrol planes, as well as the shore-based aviation assets of both the Navy and the Army in the Canal Zone. Army ground forces were also part of the Blue Force. 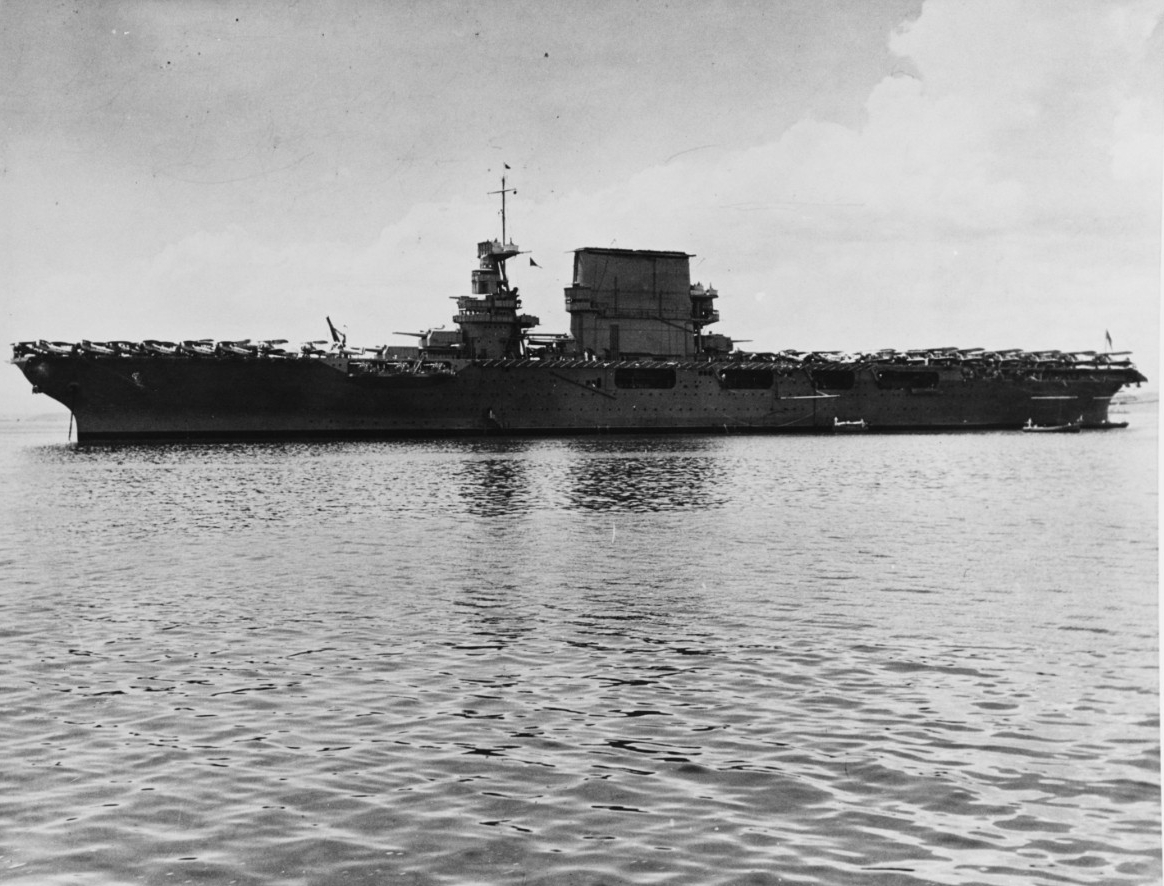 The Black Force began the problem at Magdalena Bay Mexico, 2,750 nautical miles from Panama. Admiral William V. Pratt, Commander, Battle Fleet, led the Black Force, and organized it into three elements to attack the canal, initially with air strikes on the Gatun and Miraflores Locks and then with shore bombardment of the later. He planned to steam south toward the Galapagos Islands with his striking element of battleships, destroyers, a cruiser, and Saratoga, then turn north and approach the canal by an indirect route. However, because of budgetary constraints, there was not enough fuel available for use in the exercise to move the entire striking element’s destroyers by this route. Joseph Reeves, now a rear admiral and commander, Aircraft Squadrons, Battle Fleet, recommended using only Saratoga and the cruiser Omaha (CL-4) to make the indirect run at relatively high speed and, once the Blue Force spotted the Black striking force, making a high-speed approach from the area of Galapagos to the launch site, the air strike hitting the target just after dawn. Pratt approved Reeves’ plan, and the two ships detached. Despite the fact that Rear Admiral Thomas J. Senn, Commander, Destroyers, Battle Fleet, was embarked in Omaha and was senior to Reeves, he ceded command of the “task force” to him because this was primarily an air mission and would be best led by an aviator.

The Blue Force, under Vice Admiral Montgomery M. Taylor, Commander, Scouting Fleet, concluded that the Black Force would attempt to launch air and surface strikes as Pratt was planning. Taylor knew there were options for Pratt’s approach, so the Blue commander dispersed his cruisers and most of his destroyers so they should be able to locate Black at least two days before they would be close enough to launch air strikes against the canal. He kept his main body of battleships, a destroyer division, and Lexington together to deal with the major units of the Black Force, and to keep his carrier protected. This was not entirely effective. After occasional contact between Blue surface and aviation forces with the Black striking force on 24 January, erroneous reporting on the location of Black battleships on 25 January led Lexington to launch a strike when the Black battleships were in fact only 15 miles away, hidden in a heavy squall. When the battleship emerged, they took Lexington under fire as she continued to launch aircraft before she turned and used her superior speed to escape into another squall line. While she should have been judged sunk, the desire to keep Lexington in the maneuver, led her to be ruled heavily damaged, thus limiting her ability to operate aircraft for a time and reducing her maximum speed to 18 knots.

Meanwhile, Reeves’ force approached the western edge of Blue’s patrolling ships. They “sank” a Blue destroyer, but not before it transmitted a contact message. The Blue cruiser Detroit (CL-8), a sister of Omaha (both armed with ten 6-inch guns), responded. Late on the 25th, she was sunk by gunfire from Saratoga. Omaha, however, was running low on fuel, so Detroit was ordered to switch sides and now became Saratoga’s escort. Despite this, Detroit continued to supply information to the Blue commander (a clear violation of the problem rules), and Vice Admiral Taylor ordered Lexington to go after the Black carrier. Her reduced speed, however, did not allow her to get close enough to locate Saratoga. Because of the short range of most carrier aircraft, Reeves closed to within 140 miles of the south entrance to the canal. A 70-plane strike began launching at 0548 on 26 January 1929. The air attack achieved complete surprise, hitting the two locks at about 0700 and the umpires judged them “destroyed,” rendering the canal “inoperable.” The air attack had achieved the strategic goal of the entire Fleet Problem, and no Black planes were “lost” to enemy action, although several had to land and “surrender” due to low fuel. Navy fighters proved better than their Army counterparts, driving off the few Army fighters on patrol.

However, Reeves’ tiny task force had a run of bad luck. After completing the launch, his force was operating in a foggy area. Blue battleships sweeping the Gulf of Panama spotted her at fairly close range and “sank” Saratoga. A short while later, a Blue submarine fired a spread at the carrier, and she was again ruled “sunk.” However, the carrier was allowed to continue in the problem, which later included additional air strikes and naval gunfire attacks on shore targets, an engagement of opposing battleships, and a truly odd early morning “surface” engagement between the two large carriers using their 8-inch guns against each other at about 9 miles.

Commanders of the U.S. Fleet critiqued the Fleet Problem. Admiral Henry A. Wiley, the Fleet commander, devoted half of his report to aviation issues, and expressed concerns over how the carriers were operated, often being placed in great peril, especially Saratoga. Pratt assessed the risk to the carrier, and even her loss, was worth it to achieve such a decisive result. The strike on the Panama Canal was the result of years of hard work and ingenuity by naval aviators—the excellent safety record of Reeves’ high-tempo flight operations on Langley and then on the new carriers; the insistence of building carriers with high speed and large air groups; and the work on night operations the provided the ability to launch and concentrate a strike in the low light prior to dawn. The capabilities (and weaknesses) demonstrated in Fleet Problem IX informed the development of carrier task forces used in the Pacific in World War II.