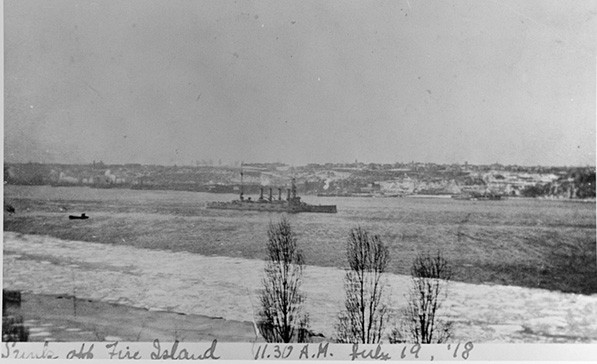 During World War I, USS San Diego (Armored Cruiser No. 6) , originally launched USS California  in 1904, guarded convoys through the first part of their passage to Europe. On 19 July 1918, bound from New Hampshire to New York, San Diego was hit by a German mine or torpedo, sinking in little more than 20 minutes with the loss of six lives.

In the nearly 100 years since its sinking, the site has been impacted by both natural and human interactions, to include both large-scale salvage operations and removal of small artifacts by divers. As a sunken military craft under the jurisdiction of the Department of the Navy, the wreck of San Diego remains government property and is protected from unauthorized disturbance under the Sunken Military Craft Act. Over the years, artifacts removed from the site without authorization from the Navy have been returned to Naval History & Heritage Command (NHHC) Underwater Archaeology (UA) Branch for treatment and curation.

The San Diego artifact collection illustrates the impact of technology and the modernization of the United States Navy.  Electricity was becoming common place in the 1900s and the Navy took advantage of this new technology, as represented by an electrical lamp fixture, electric wall switch, electrical fuse boxes and a fire alarm. Other ship components include hoist gears, steam valve, valve wheels, deck chock, and bilge strainers.

Artifacts in the collection illustrate shipboard life with vessels for eating, serving, and storing such as dinnerware, silverware, and a serving platter. Personal items and uniform pieces are also among the collection, such as a United States Marine Corps (USMC) Marmeluke Officer’s sword. This particular type of sword was adopted by the USMC in the early 19th century and is usually carried as a dress sword by officers.

Some of the rarest items in the collection are the paper documents, which, due to their organic nature, are an uncommon find to be so well preserved under water and not destroyed after unsanctioned recovery. These 162 documents include invoices, memorandums, reports, and list of absentees, most of which refer to the vessel as USS California.

The artifacts in the collection provide insight into life aboard an early 20th century Navy vessel and, as the U.S. Navy’s only major warship loss during WWI, serve as a reminder of the dangers and sacrifices of our men and women in uniform even while close to home.