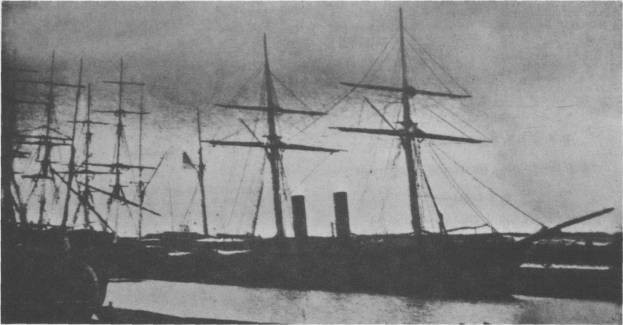 Caption: Some details of CSS Rappahannock can be seen in Civil War photograph of ship in harbor of Calais, France

Rappahannock, originally the passenger steamer St. Nicholas, was captured in the Potomac River on 28 June 1861. On a regularly scheduled run between Baltimore and Georgetown, D.C., she was boarded at various points along the Potomac by Confederates posing as passengers. Leaders of this group were Col. R. Thomas, CSA, who came on board disguised as a woman, and Capt. G. N. Hollins, CSN. They seized the steamer near Point Lookout and Captain Hollins took command, sailing the ship down to Chesapeake Bay, where she took three prizes on 29 June. Condemned as a prize, purchased by the Confederate Navy and commanded by Lt. H. H. Lewis, CSN, she operated in the Potomac and Rappahannock until April 1862 only to be burned by the Confederates at Fredericksburg.

Rappahannock, a steam sloop-of-war, was built in the Thames River in 1857 for the British Government and named Victor. Although a handsomely modeled vessel, numerous defects occasioned her sale in 1863. An agent of the Confederate States Government purchased her ostensibly for the China trade, but British authorities suspected she was destined to be a Confederate commerce raider and ordered her detention. Nevertheless, she succeeded in escaping from Sheerness, England, on 24 November, with workmen still on board and only a token crew. Her Confederate Naval officers joined in the Channel.

When he bought her from the Admiralty through his secret agent on 14 November, Comdr. M. F. Maury had intended Rappahannock to replace unwanted, iron Georgia and was about to transfer Georgia's battery to her. She was ideal for a cruiser-wooden hull, bark-rigged, two engines and a lifting screw propeller-but she was doomed to serve the Confederacy no more glamorously than a floating depot.

She was commissioned a Confederate man-of-war underway, but while passing out of the Thames Estuary her bearings burned out and she had to be taken across to Calais for repairs. There Lt. C. M. Fauntleroy, CSN, was placed in command.

Detained on various pretexts by the French Government, Rappahannock never got to sea and was turned over to the United States at the close of the war.


Some details of CSS Rappahannock can be seen in Civil War photograph of ship in harbor of Calais, France