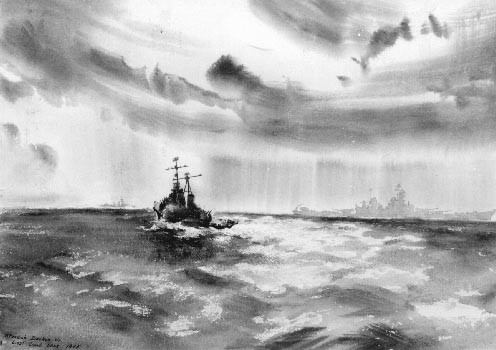 The Third Fleet at sea is scarcely ever visible in its entirety to a single observer, either on the surface or in the air. What one sees is the aspect of some of the other ships in one's own task group. Occasionally, the whole fleet will rendevous at a prearranged site and then one can see lines of ships disappearing over the horizon in all directions. However, while steaming back and forth some 300 miles southeast of Honshu during the twelve days between 15 August 1945 and the 27th (when the fleet entered Japanese waters) the most impressive sight to this observer was the confident form of the battleship Iowa.