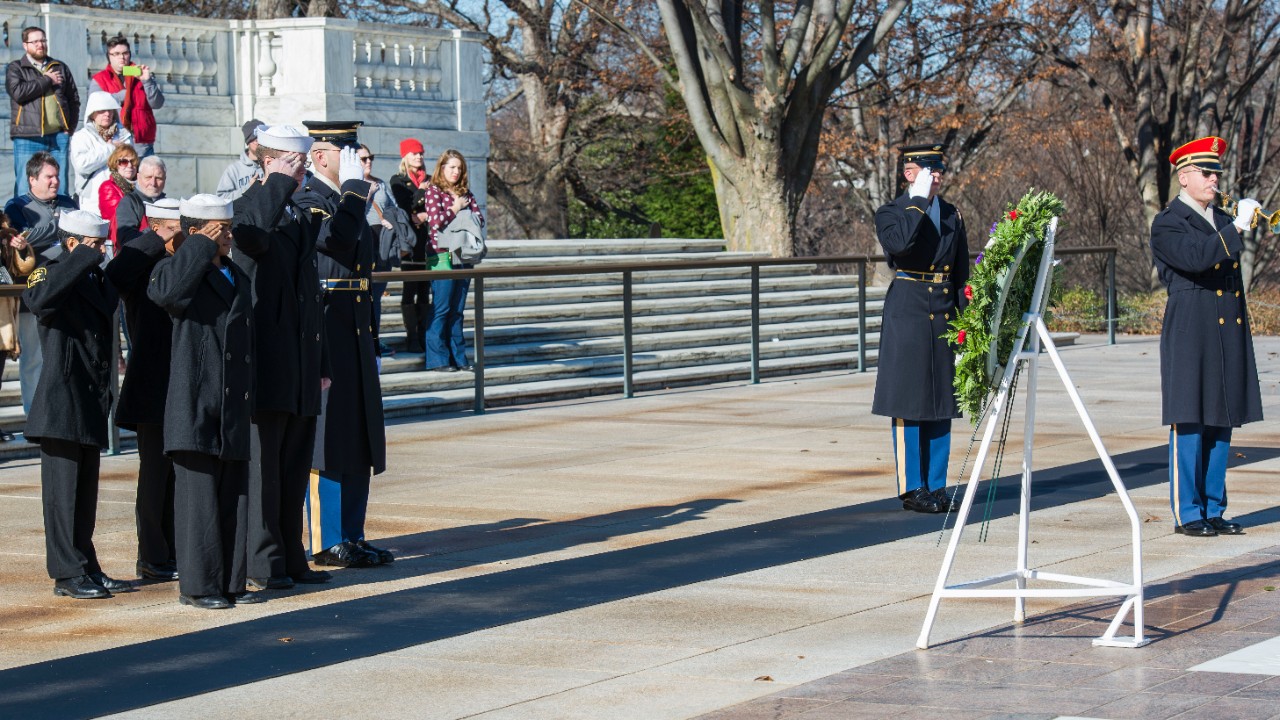 ARLINGTON, Va. (NNS) -- A Sailor from Naval History and Heritage Command (NHHC) helped honor those lost in the World Warr II attack on Pearl Harbor with a wreath laying ceremony, sponsored by the Naval Order of the United States, at Arlington National Cemetery's Tomb of the Unknowns, Dec. 7.

Mass Communication Specialist 2nd Class Eric Lockwood, a Gainesville, Fla. native, was honored to salute those who gave everything when the Japanese attacked the ships and aircraft in Hawaii more than 70 years ago.

"It's great to be able to honor them," Lockwood said of the wreath laying. "There were a lot of Sailors who became heroes that day."

Lockwood realizes marking important moments in the history of the Navy and the nation is essential.

"When we honor those who sarificed the way those who died on Dec. 7 did, it brings the history of the event to the forefront," he said. "It helps us realize that, even if it has been a long time, we cannot take the sacrifices that our service members have made for granted because we may one day be asked make similar sacrifices. I'm proud to be a part of this."

Christopher Clay, Jerome Foster and Sachin Muralidhar, three U.S. Naval Sea Cadets, were also part of the ceremony. Clay and Muralidhar watched solemnly as Lockwood and Foster laid the wreath, sponsored by the Naval Order of the United States, then all saluted the wreath as a member of the U.S. Army's Old Guard played taps in honor of those who made the ultimate sacrifice at Pearl Harbor. The crowd remained silent in respect for the moment at the tomb.

It was 6 a.m. on Dec. 7, 1941, when six Japanese carriers launched a first wave of 181 planes composed of torpedo bombers, dive bombers, horizontal bombers and fighters toward Hawaii. The Japanese aircrews achieved complete surprise when they hit American ships and military installations on Oahu shortly before 8 a.m. More than 90 ships were anchored in Pearl Harbor, but the Japanese's primary targets were the eight battleships anchored there. Seven were moored on Battleship Row along the southeast shore of Ford Island while the USS Pennsylvania (BB 38) lay in dry dock across the channel.

The attack ended shortly before 10 a.m., less than two hours after it began, and the American forces paid a heavy price. Twenty-one ships of the U.S. Pacific Fleet were sunk or damaged, 188 aircraft destroyed and 159 damaged, the majority hit before they had a chance to take off. American dead numbered more than 2,000 with more than 1,000 military and civilian wounded. The attack which horrified a nation was the catalyst that brought America into World War II.

The Naval History and Heritage Command, located at the Washington Navy Yard, is responsible for the preservation, analysis, and dissemination of U.S. Naval history and heritage. It is composed of many activities including the Navy Department Library, the Navy Archives, the Navy art and artifact collections, underwater archeology, Navy history, nine museums, USS Constitution repair facility and the historic ship Nautilus.

The Naval Order of the United States was founded in 1890 by descendants of New England seafarers who fought in the Revolutionary War. The Order's charge is to encourage research and writing on naval and maritime subjects and to promote the preservation of historic artifacts and memories of naval and maritime history.

For more information on the Japanese attack on Pearl Harbor visit the Naval History and Heritage Command Website at www.history.navy.mil