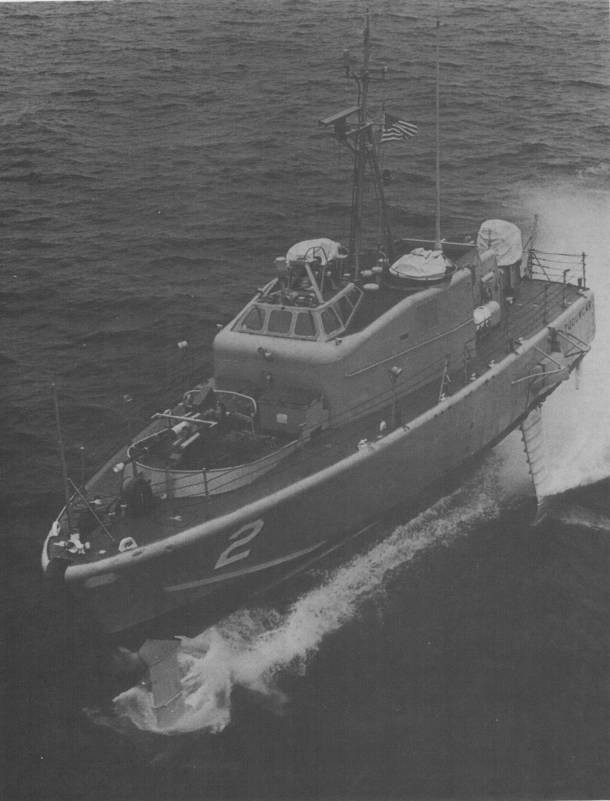 A city in and the seat of Quay County, New Mexico. The name is derived from the Comanche Indian word "tukamukaru," which means to lie in wait.

Tucumcari (PGH-2) was laid down on 1 September 1966 at Seattle, Wash., by the Marine Branch of the Boeing Company's Aerospace Group; launched on 15 July 1967; and delivered to the Navy on 7 March 1968. Placed "in service" on that day, the ship's first officer-in-charge was Lt. Marvin H. Mandles, USNR.

Tucumcari, an extremely fast, highly maneuverable, experimental hydrofoil gunboat designed to perform well even in heavy weather, represented the culmination of 10 years of hydrofoil development. The new gunboat arrived in San Diego, her home port, in July 1968. She conducted operational evaluation tests with Amphibious Forces, Pacific Fleet, and participated in exercises. In addition, the craft conducted day and night operations with the Fleet with ships ranging from cruisers to patrol craft. During her tour of duty in San Diego, she performed a mission of mercy, rendezvousing with a Navy tug beyond helicopter range and receiving on board one of the tug's crewmen for transportation to San Diego for emergency leave.

After a year of operations out of San Diego, Tucumcari was deployed to Vietnamese waters. She spent most of her six months in the combat zone assigned to Operation "Market Time," the inshore patrol established to stop the flow from the north of communist arms and infiltrators. While performing this duty, she logged 200 hours of foilborne operations including day and night, all-weather, and high sea-state missions. She also conducted underway replenishments with larger fleet units and vertical replenishment from helicopters. The latter even included medical evacuation operations and the transfer of cargo loads.

Tucumcari returned to San Diego in March 1970 and operated off the west coast until transferred to the Atlantic Fleet in August. After operating off the east coast into 1971, Tucumcari was slated to deploy to northern Europe and to the Mediterranean to demonstrate the capability of hydrofoil propulsion for other NATO nations. It was hoped that the demonstration would stimulate the development and production of a NATO guided missile hydrofoil.

Tucumcari was loaded on board Wood County (LST-1178) on 22 March 1971 and secured in a specially constructed cradle on the main deck. Three days later, Wood County got underway for Copenhagen, Denmark, and the first of demonstration "flights" for the hydrofoil gunboat. Arriving in Copenhagen on 8 April, Tucumcari was offloaded on the 13th and readied for her first tests. While in Danish waters, the patrol craft participated in Exercise "Evil Edge," a joint West German, Danish, and American patrol boat exercise. During "Evil Edge," the gunboat made simulated attacks against West German destroyers. Tucumcari was subsequently put through her paces at Olpenitz, Germany; Rosyth, Scotland; Portsmouth, England; and Brest, France, before the northern and western European phase of the tests were concluded and Wood County, with the hydrofoil gunboat stowed on deck, sailed for Toulon, France, on 6 July to commence the Mediterranean phase of the deployment.

After demonstrating at Toulon, Tucumcari conducted further operations at Athens, Greece; Golchuk, Turkey; Brindisi and Augusta, Italy; and in the Tyrrhenian Sea, concluding the last of these tests on 25 September. Then, on 1 October, with Tucumcari safely nestled on board, Wood County sailed for Little Creek, Va.

Homeported at Little Creek, Va., Tucumcari operated with the Atlantic Fleet Amphibious Force into the autumn of 1972. On 16 November of that year, she ran aground seven miles west of Puerto Rico during night operations with amphibious forces. Fortunately, she suffered no personnel casualties. While she was being pulled off the coral reef, the craft incurred more damage, so severe that she could not be economically repaired. Accordingly, she was struck from the Navy list on 7 November 1973 and transferred to the Naval Ship and Research Development Center at Annapolis, Md. She was subsequently used as a test hulk for structural evaluation and fire containment tests into the mid-1970's.