Virginia II, a steam-powered ironclad ram, was laid down at the Confederate Navy Yard at Richmond, Va. in April 1862. Acting Constructor William A. Graves, CSN, supervised her construction, but in order to conserve scarce iron, he shortened the casemate called for in the original John L. Porter plans. Virginia IIs armor was 6” thick on the forward face and 5” on the sides and after face.

The original Virginia’s success at the Battle of Hampton Roads caused “gunboat associations” to emerge around the South, mainly driven by women, and their efforts helped with the construction of Virginia II. Funds were largely contributed by the Richmond chapter of the “Ladies Aid and Defense Society” which adopted the ironclad in early April 1862 for the defense of Richmond. The president of the organization was 73 year-old socialite Maria Gaitskell Clopton, wife of distinguished Judge John Bacon Clopton. It is estimated that the society contributed more than $30,000 towards Virginia II‍ s construction.

By November 1862, noted marine and military innovator Cmdr. John Mercer Brooke, CSN, was able to report that she was “pretty well advanced, frames up, clamps in, etc...She will be a strong and fine vessel.” However, after this promising start, significant delays plagued the new ironclad. It was more than a year after she was laid down that Virginia II was finally launched on 29 June1863. “She glided into the water ‘like a thing of life’ amid the prolonged cheers of the spectators”. But she suffered from further fitting-out delays and was not fully commissioned until 18 May 1864 nearly a year later. Replacing Richmond, she was made the flagship of 53 year-old Commodore John K. Mitchell, CSN, commanding the James River Squadron.

Virginia IIs captain, 52 year-old Cmdr. Robert Baker Pegram, CSN, was born in Dinwiddie County, Va., on 10 December 1811. He entered the United States Navy as a midshipman on 2 February 1829, served in the Mediterranean Squadron and was appointed a lieutenant on 8 September 1841. Ordered to Saratoga, under Captain David G. Farragut in 1847, he served in the Mexican War and in 1852 took part in the Japan expedition. In 1855 Pegram participated in a joint expedition from the British ship Rattler and the United States vessel Powhatan against a pirate flotilla of 31 war-junks. For this service he received the thanks of Admiral Sir James Stifling, flag-officer of the British East India Squadron, the governor of Hong Kong and the British government and was presented with a sword by the Commonwealth of Virginia. He later served at the Norfolk Navy Yard from 1856-58, in the Paraguay expedition in 1858 and in 1859 was a commissioner to define the limits of the Newfoundland fisheries.

Pegram resigned from the United States Navy on 17 April 1861, became a captain in the Virginia service and commanded Norfolk Navy Yard after its evacuation by United States forces. He later erected a battery at Pig Point, Nansemond River, where he disabled Harriet Lane when she was surveying the river and placing buoys. Afterwards, he commanded the steamer Nashville which left Charleston S.C. on 26 October 1861 and returned the following February after having eluded Union pursuit and destroying several merchant vessels. Pegram was ordered to supervise the construction of Richmond during March and April 1862 and after taking her to Drewry’s Bluff, he was transferred to Virginia II.

Pegram took Virginia II into action on 21 June 1864 during an engagement between the James River Squadron and Federal ships at Trent’s Reach. However, the ironclad developed mechanical problems when an errant chain from the nearby Richmond became entangled in her propeller and she could no longer contribute to the battle.

On 13 August she participated in the attack on Union forces beginning to construct a larger canal at Dutch Gap. The Federal vessel Maugus and her gunboats joined in the battle, but they could not effectively train their guns. However, they did manage to fire two salvos that struck Virginia II. Four days afterwards, she participated in the capture of Signal Hill and shelled the Union defenses there from 3:00-9:00 p.m. before finally ceasing fire.

From 29 September through 1 October 1864, Virginia II and the entire squadron attacked Maj. Gen. Benjamin Butler’s Army of the James at New Market Heights and Fort Harrison in conjunction with the Confederate Army of Northern Virginia. The operation was the largest engagement north of the James since the 31 May-12 June Battle of Cold Harbor and it remained so until the close of the war. Once again though, Virginia II suffered difficulty which delayed her entrance into the battle. She had just received a replacement gun, and in the scramble to leave the dock, the supply ship Gallego became entangled in her anchor chain, causing Gallego to founder.

In their routine patrol of the James River, the squadron was surprised to discover, on the morning of 22 October, that the Union Army had finished fortifying Cox Hill. To cover the retreat of the Confederate wooden vessels, Virginia II approached the battery, followed by two ironclads, and affected a retreat upstream to Chaffin’s Bluff. During this maneuver, Virginia II‍ s smokestack was riddled by shells. Although caught by surprise, this small action helped determine the effectiveness of the ironclad’s armored casemates against close-range rifled cannon fire, and in the case of Virginia II, the results were satisfactory. Her casemate withstood seven direct hits by 100-pound shells which scarcely damaged her plating.

On 7 December 1864, Virginia II, along with Fredericksburg and Richmond, steamed down to Fort Brady near Trent’s Reach and near sunset exchanged cannon fire with the fort’s batteries until darkness fell.

Her final action took place on 23-24 January 1865 when the Confederate James River Squadron, including ironclads Virginia II, Richmond and flagship Fredericksburg, along with five smaller vessels, made a second attempt to circumvent the obstructions and mines at Trent's Reach. Their intention was breaking through the blockade in order to attack City Point, the supply depot and headquarters of Gen. Ulysses S. Grant and forces besieging Petersburg. A reliable report indicated that there was a passage through as a result of a deluge of water from melting ice. To avoid the risk of collision, the gunboats and tenders were lashed to the starboard sides of the ironclads. Virginia II augmented to her bulk the gunboats Nansemond and Torpedo with the torpedo boat Scorpion in tow. After passing the Union batteries at Fort Brady sometime after 8 p.m., Virginia II accidentally beached Torpedo by steering too close to the shore. The captain of Nansemond then untied his ship from Virginia II in an attempt to free Torpedo. The remaining fleet continued on and reached the obstructions at Trent’s Reach.

Upon arriving, Virginia II ran into trouble once again by running aground and the smaller ships tried to free her for three hours. Only two ships made it through while the rest were either running aground or helping the ones that had. Dawn came with most of the squadron in full view of the Union fortifications at Battery Parsons and they endured its fire until the tide raised high enough to allow them to finally retreat. In late morning, just as the water was high enough to re-float Virginia II, the Union fleet arrived and added its firepower. This time it was much more deadly. The double-turreted monitor Onondaga was able to pierce her armor with its guns. Virginia II as well as the rest of the squadron hurriedly retreated upstream until they were safely under the cover of Confederate Battery Dantzler. Confederate forces had installed two seven-inch Brooke rifles, two ten-inch Columbiad guns and two siege mortars there in order to prevent Federal Navy vessels from approaching the Confederate capital at Richmond. They attempted to run past again that night, but Union soldiers had erected large "Drummond lights" that illuminated the area around the mine field, allowing the batteries to fire nearly as accurately at night as they had during the day. This, combined with myriad other factors, forced the attempt to be abandoned.

As the squadron withdrew, Hampton managed to entangle her screw propeller in Virginia IIs anchor chain. They suffered more heavy fire on their return upriver from Fort Brady, and Virginia II ran aground again before making it to the safety of Chaffin’s Bluff. She had six crewmembers killed and as many wounded from the action and also suffered heavy battle damage that required extensive repairs. The ironclad was struck by cannon fire seventy times, her smokestack was destroyed, the engines became faulty and her iron armor and underlying wooden framework were damaged. Steam seeping from her deck also impaired the pilot’s visibility.

Her repairs had just been completed when Virginia II, as well as the other Confederate warships of the James River Squadron, was ordered to be destroyed by their commander, Admiral Raphael Semmes. The agonizing command was in order to prevent their imminent capture by rapidly advancing Union forces during the evacuation and fall of Richmond on 3 April 1865. Having never left the confines of the James during her service, Virginia II lies badly broken nearly twenty feet under the silt and partially beneath the opposite shoreline from Chaffin’s Bluff. 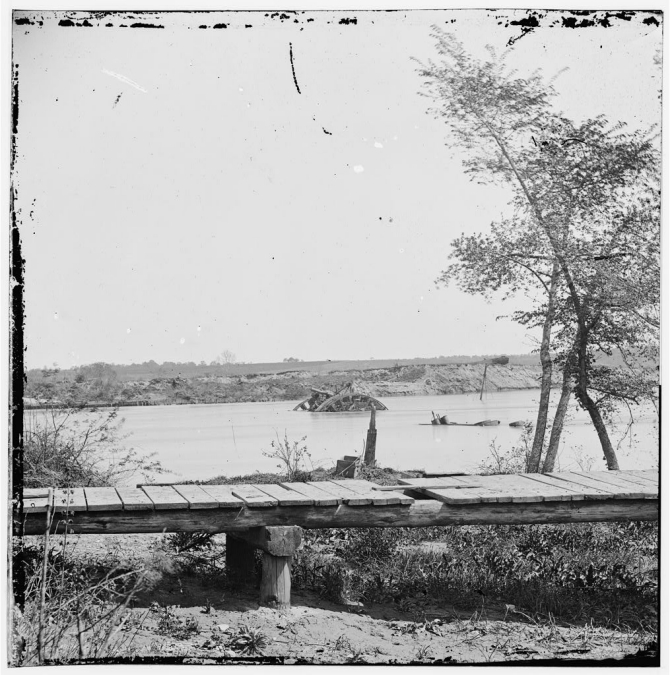 Jamestown and Virginia II sunk in the James River near Drewry's Bluff, April 1865. Jamestown, whose paddlebox tops are visible in the center, was sunk as an obstruction off Drewry's Bluff, 15 May 1862. Virginia II was destroyed when the Confederates evacuated Richmond 3 April 1865. Photographed by Matthew Brady. US Library of Congress photo # LC-B8171-3350 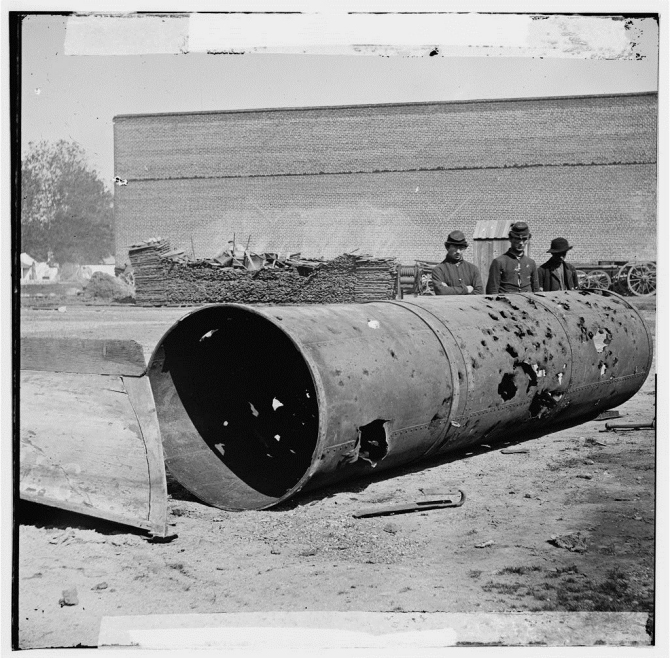 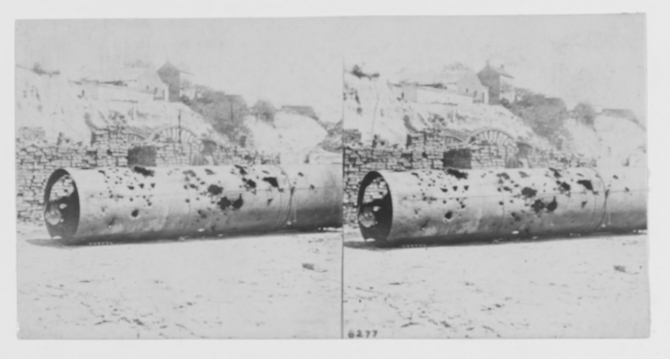