Hampton -- a wooden gunboat -- was laid down at the Norfolk [Gosport] Navy Yard in the early months of 1862. She was based there until 10 May when the yard was abandoned and the fleet moved up the James River.

The Hampton class -- known as “Maury Gunboats” -- was the brain-child of Cmdr. Matthew Fontaine Maury, CSN, the father of hydrography. One hundred of those “Jeffersonian-type” gunboats were planned as a “contemporary manifestation of a recurrent theory that wars may be fought economically with mosquito fleets”. Surprisingly, no drawings have come to light to support the very detailed specifications of which Maury wrote despite his notation that “the inboard plans will be furnished by the Department,” indicating that many sets must have been issued. Individual yards may have made minor modifications, but nothing approaching what Maury himself sought. Only Hampton and Nansemond saw service, while Norfolk and Portsmouth, as well as others, were burned on the stocks.

The loss of Norfolk shifted the James River Squadron’s base of operations -- that included shipyards, supply depots, hospitals and industrial facilities -- to the Confederate Capital at Richmond, Va. The squadron had been established as a part of the Virginia State Navy shortly after its secession from the Union on 17 April 1861 and was commanded by Capt. French Forrest. Although it began as a modest collection of mostly wooden ships, the squadron later became a part of the Confederate States Navy. Its base protected by a strong line of obstructions, torpedoes [mines], and land fortifications, the squadron operated at Chaffin’s and Drewry’s Bluffs, eight miles downstream from the capital. Hampton was assigned to the squadron and began her service under the command of Lt. George W. Harrison, CSN.

Between May 1862 and May 1864, the squadron enjoyed a long respite from combat, during which time Hampton and Nansemond, as well as three ironclads based on the general design of Virginia and built at the Richmond yards, augmented its strength. Richmond was commissioned in November 1862 and Fredericksburg and Virginia II in May 1864. A fourth, Texas, was launched but not commissioned when hostilities came to a close.

When Lt. Gen. Ulysses S. Grant reversed his northern approach to Richmond, crossed the James and based his communications center and supply depot at City Point, control of the river became crucial in 1864. The Confederate James River Squadron, then under the command of 53 year-old Commodore John K. Mitchell, helped check Grant’s right flank advancing up the James and threatened his center by bombarding  Federal monitors at Trent’s Reach on 21 June 1864.

On 13 August 1864, with Lt. John S. Maury, CSN, in command, Hampton participated in the attack on Union forces beginning to construct a larger canal at Dutch Gap. The Federal vessel Saugus and her gunboats joined in the battle, but they could not effectively train their guns due to the angle of the ironclad’s casemates.

From 29 September through 1 October 1864, Hampton, now under the command of Lt. John W. Murdaugh, along with the entire squadron attacked Maj. Gen. Benjamin Butler’s Army of the James at New Market Heights and Fort Harrison in conjunction with the Confederate Army of Northern Virginia. The operation proved to be the largest engagement north of the James since the Battle of Cold Harbor (1 May-12 June) and it remained so until the close of hostilities.

The James River Squadron, during a routine patrol of the river on 22 October 1864, was surprised by a new Union battery near Boulware House two miles from Chaffin’s Bluff. In order to cover the retirement of Hampton and the fleet’s other wooden vessels of the fleet, the flagship Virginia II approached the battery, followed by Richmond and Fredericksburg and then affected a retreat upstream to Chaffin’s Bluff.

The opposing naval forces continued to face each other across barriers of obstructions and torpedoes as well as the dramatic bends of the James River below Chaffin’s Bluff, a situation that mirrored the trench warfare that prevailed ashore. Acting in concert with the land batteries, partially manned by then navyl, the squadron worked to prevent Union forces from crossing the river behind Confederate lines and looked for opportunities to move against the enemy.

Hampton’s final action took place on 23-24 January 1865 under the command of Lt. Joseph David Wilson when the Confederate James River Squadron made a second attempt to circumvent the obstructions and mines at Trent’s Reach. Unusually high waters had caused significant damage to Union barriers therefore Commodore Mitchell seized this opportunity to attack. The timing was especially opportune since several ships in the Union fleet had recently been transferred to North Carolina in order to support attacks against Fort Fisher. Mitchell and his fleet planned to break through the remaining Union vessels and destroy the Union supply line from City Point. The ensuing conflict became the Battle of Trent’s Reach.

As the squadron crept under the cover of darkness past the Union batteries on Signal Hill and Fort Brady, Mitchell and his fleet were spotted by Union lookouts. Although they immediately opened fire, the Confederate ships made it through virtually unharmed and continued towards the naval mine field at Trent’s Reach. As Virginia II and Richmond anchored above the Federal barriers, Fredericksburg led Hampton and the wooden fleet to clear the way.

Despite the fact that the Union obstruction had been damaged by high waters, removing it proved quite difficult -- a spar between two hulks served as the chief impediment. The water level then began to recede as the Fredericksburg crew worked to clear the river and sent other boats ahead in order to prepare the way for the ironclads.

It was a dangerous operation that the Confederates undertook since their position removing the barrier was virtually unshielded from three Federal artillery batteries on shore at Trent’s Reach. Despite the Union sharpshooters’ sniping throughout the night, the sailors managed to clear the river by the early morning hours of 24 January and they were ready to move towards City Point.

By this point, however, Mitchell’s squadron had lost any advantage of surprise. The Confederates were met by Union warships poised to attack. Worse yet, the ironclads were struggling to maneuver through the now shallow river. Added to that disadvantage, the sun began rising as ironclad after ironclad ran aground. Consequently, the Union batteries unremittingly shelled the grounded ships, including the torpedo boat Scorpion along with Richmond, Virginia II, and Drewry.

When all seemed lost, the water level began to rise once again and the Confederate gunboats dislodged themselves from the shallow waters. Both forces then retreated precipitately. Mitchell regrouped and launched a second attack against Trent’s Reach despite the fact that the James River Squadron had been severely weakened.  The second operation fared no better than the first, and after Mitchell and his commanders met to discuss their available options and decided to abandon the second assault effort, they moved upriver to a refuge below Chaffin’s Bluff.

Both Commodore Mitchell and the Union commander, Capt. William A. Parker, lost their leadership positions shortly thereafter due to decisions made during the engagement on the James River. The Battle of Trent’s Reach became the last major naval engagement of the Civil War. By February 1865, the Union boasted of a reinforced naval presence on the river and successfully prevented any future Confederate offensives. With their failure on the river came the realization that the Confederates had lost the opportunity to break the siege at Petersburg.

Mitchell’s successor as squadron commander was 55 year-old Admiral Raphael Semmes, former commander of the celebrated commerce raider Alabama. Semmes found his new assignment “dreary, weary, and lonely.” In the early morning hours of 3 April 1865, he learned belatedly that the Confederacy was abandoning Richmond.  Ordered to destroy the ships of the James River Squadron, Semmes carried out his instructions and then transformed the squadron’s officers, sailors and marines into a land force that accompanied the Confederate Government to Danville, Va. and eventually surrendered at Greensboro, N.C. Sailors manning the shore batteries around Richmond became a “Naval Brigade” under the command of Commodore John Randolph Tucker and accompanied the Army of Northern Virginia during the Appomattox Campaign. They eventually surrendered during the Battle of Sailor’s Creek on 6 April 1865.

The sun had barely risen on 3 April 1865 as Lt. William Ladd of the 13th New Hampshire Regiment rode into a nearly deserted and burning Richmond. While investigating the city, Ladd observed a Confederate ship in the river nearby, flying her colors.

“I was in the Capitol grounds as early as 5:30 am.,” Ladd recounted later, “I saw no flag on the Capitol at that time. After looking about the grounds and vicinity for a few minutes, and realizing I was alone in the city, I rode back towards Rocketts, and when near there met a white Union cavalryman, the first Union soldier I had seen in Richmond that morning. We tied our horses, took a skiff and rowed out to a rebel warship in the James, and captured two Confederate flags then flying upon her. I pulled down the larger flag, the cavalryman the smaller one, and we rolled them up and tied them to our saddles”.

The two men had departed the ship in the nick of time, for unknown to them, Hampton was afire internally, her guns loaded in order to deny the Union Army its capture. Soon after Ladd and the horse soldier left with their captured colors, the ship was rocked by an explosion and she slowly sank into the waters of the James River. 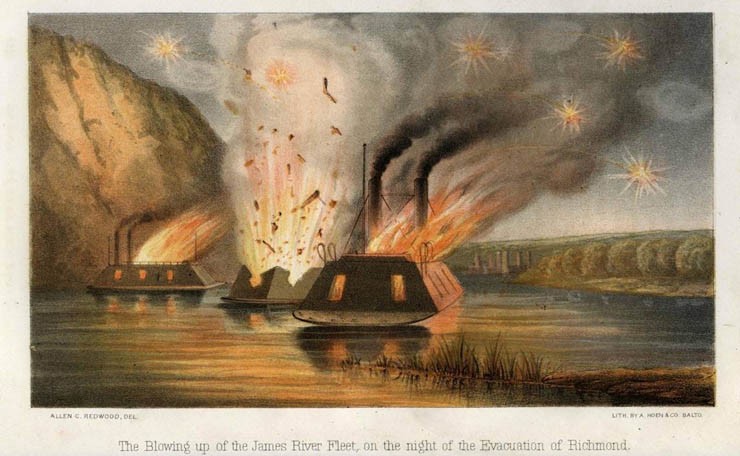 Confederate ships blaze into the night as the Southerners evacuate Richmond, Va., in this picture by Allen C. Redwood of Del.