Over the course of 242 years, the U.S. Navy has been integral in shaping the story of the United States. From the defeat of the British ship HMS Serapis by Capt. John Paul Jones in the Battle of Flamborough Head to the surprise attack on the naval base in Pearl Harbor, the cheers and tears of American Sailors are forever preserved in the annals of time. 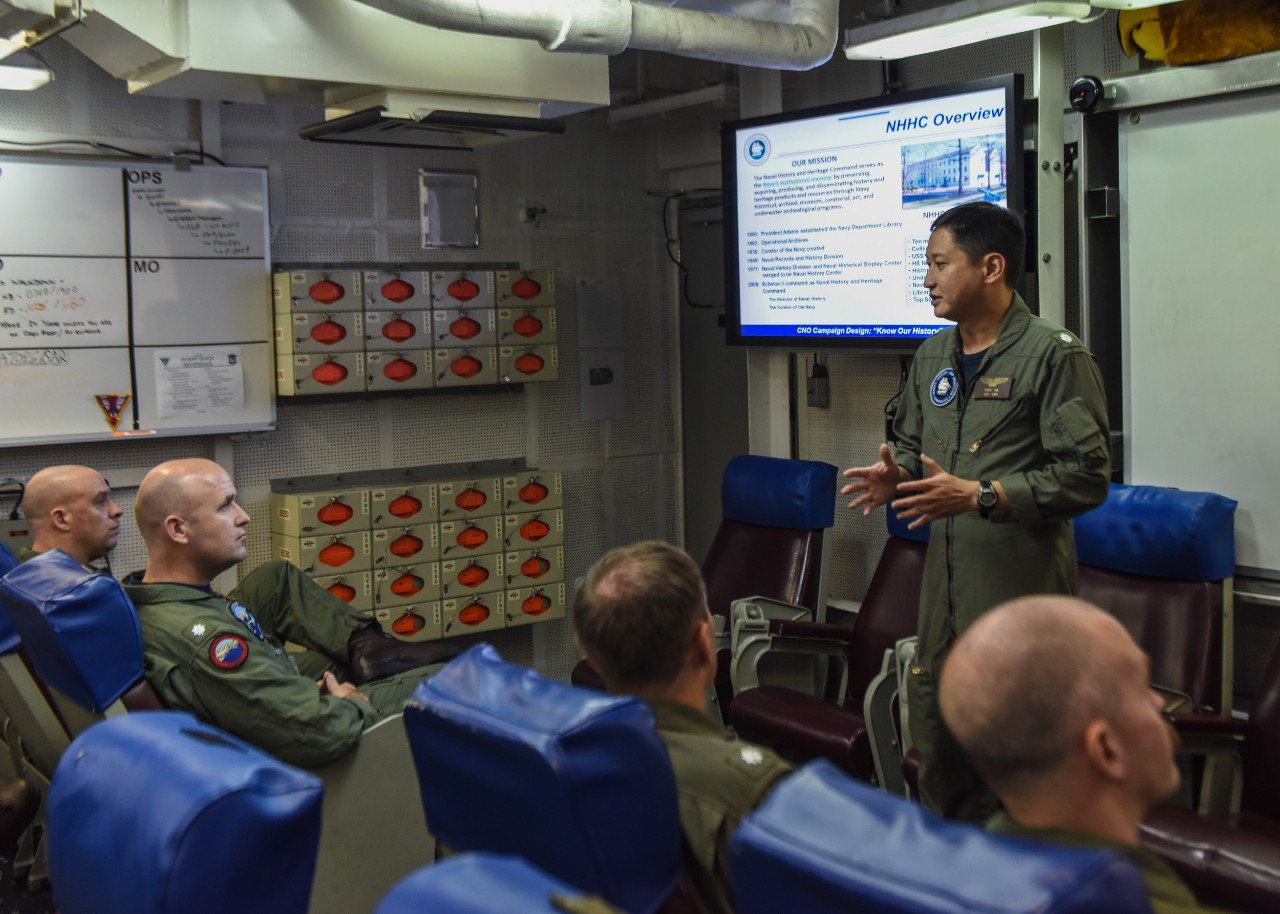 While all Sailors learn and memorize various dates and events of importance for the Navy, very few likely give any thought to those in charge of documenting that history.

The command taking the lead on such an important task is the Naval History and Heritage Command (NHHC), based out of Washington, D.C. Charged with collecting, preserving, protecting, presenting and making relevant the artifacts, art and documents that best capture the Navy’s history and heritage, NHHC has a lot of land, or rather sea, to cover.

In the pursuit of presenting another segment of the ever-expanding timeline that is U.S. Naval history, the command recently embarked aboard the Navy’s forward-deployed aircraft carrier, USS Ronald Reagan (CVN 76), to speak to various departments and embarked commands about the importance of preserving the Navy’s rich history.

“The NHHC team is onboard specifically to discuss and provide training on the Command Operations Report (COR),” said Cmdr. Eddy Ha, chief of staff for NHHC.

The COR is the foundational source document to capture the Navy’s operational history.  It is one of the few documents that is permanently kept by NHHC and preserved at the National Archives, where it becomes part of the American story.

Though the COR was an important part of the command’s mission on the ship, NHHC personnel also took time to interview Ronald Reagan Sailors on a variety of topics, in an effort to help paint a picture of what life is like on the forward-deployed aircraft carrier.

“The team is also onboard to capture oral histories,” continued Ha. “Examples of these might include the George Washington and Ronald Reagan hull swap or even transition to life in forward-deployed naval forces.  These individual vignettes supplement the official history and enrich our understanding.”

During their visit, NHHC is implementing various tactics to capture moments that will eventually become part of history.

“We are collecting documents like ‘Green Sheets’ and air plans to give a snapshot of day-to-day activities aboard Ronald Reagan,” said Ryan Peeks, a historian at NHHC.

“Also with the team is a Navy combat artist,” added Ha. “He will be taking pictures of activities aboard Ronald Reagan before putting oil to canvas later on.” 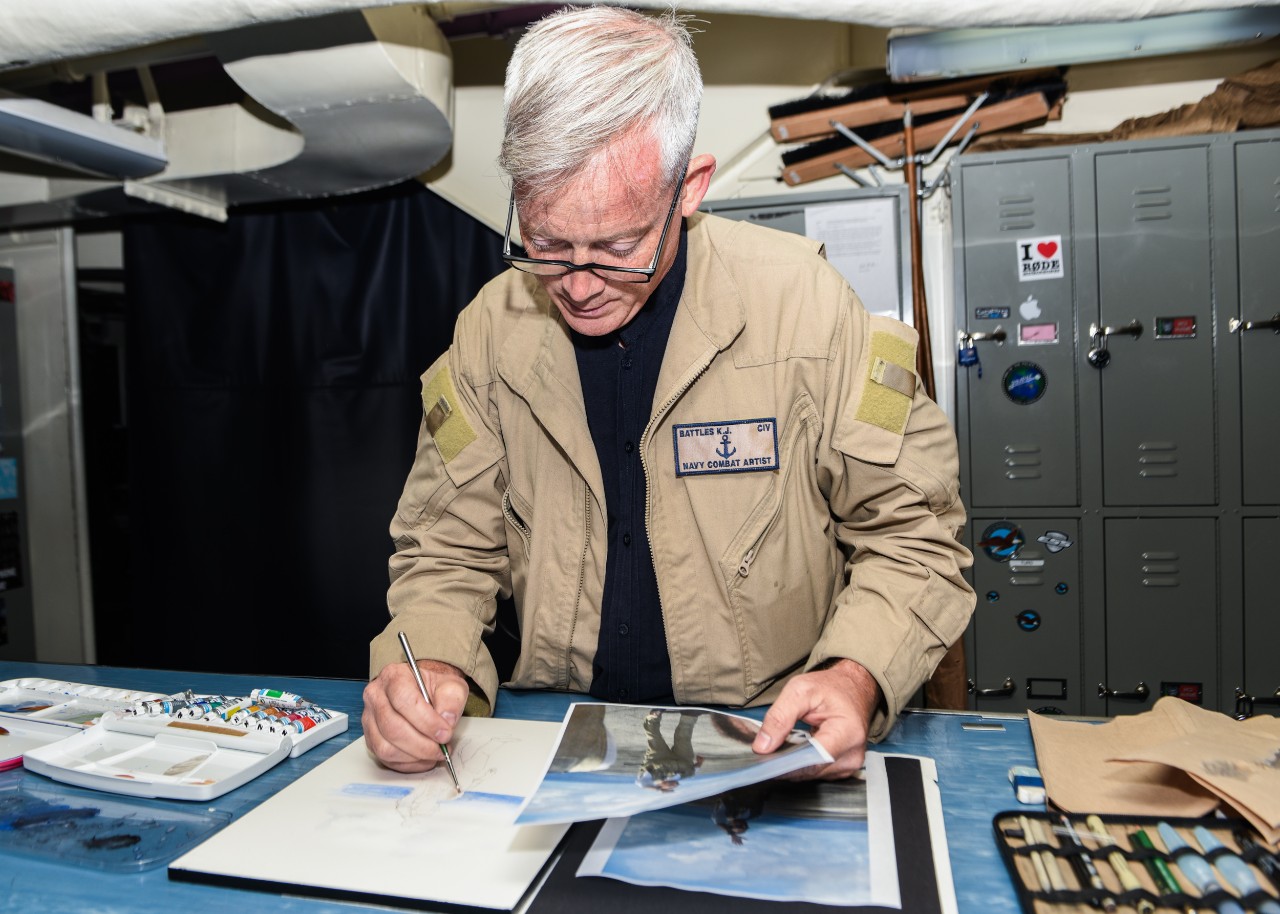 The staff at NHHC feels that every sample they retrieve from Ronald Reagan has a place in the overall Navy story.

“The material we collect is a critical supplement to the Command Operations Report and they give the ‘big picture,’” said Peeks. “We serve as the intuitional memory of the Navy and preserve hard-learned lessons from previous generations.”

According to some of the staff at NHHC, the value of preserving history doesn’t just stop at providing lessons learned.

Whether they know it or not, Sailors currently serving their country are vital to telling the Navy story. With the present intrinsically tied to the past, all the daily events that occur on the ship help piece together tomorrow’s history and will one day be cherished by future generations. Thanks to the efforts of NHHC, these little moments out at sea will not be lost to time, but rather immortalized along with the heroic efforts of Capt. John Paul Jones and the courageous stand taken by those during the surprise attack on Pearl Harbor.