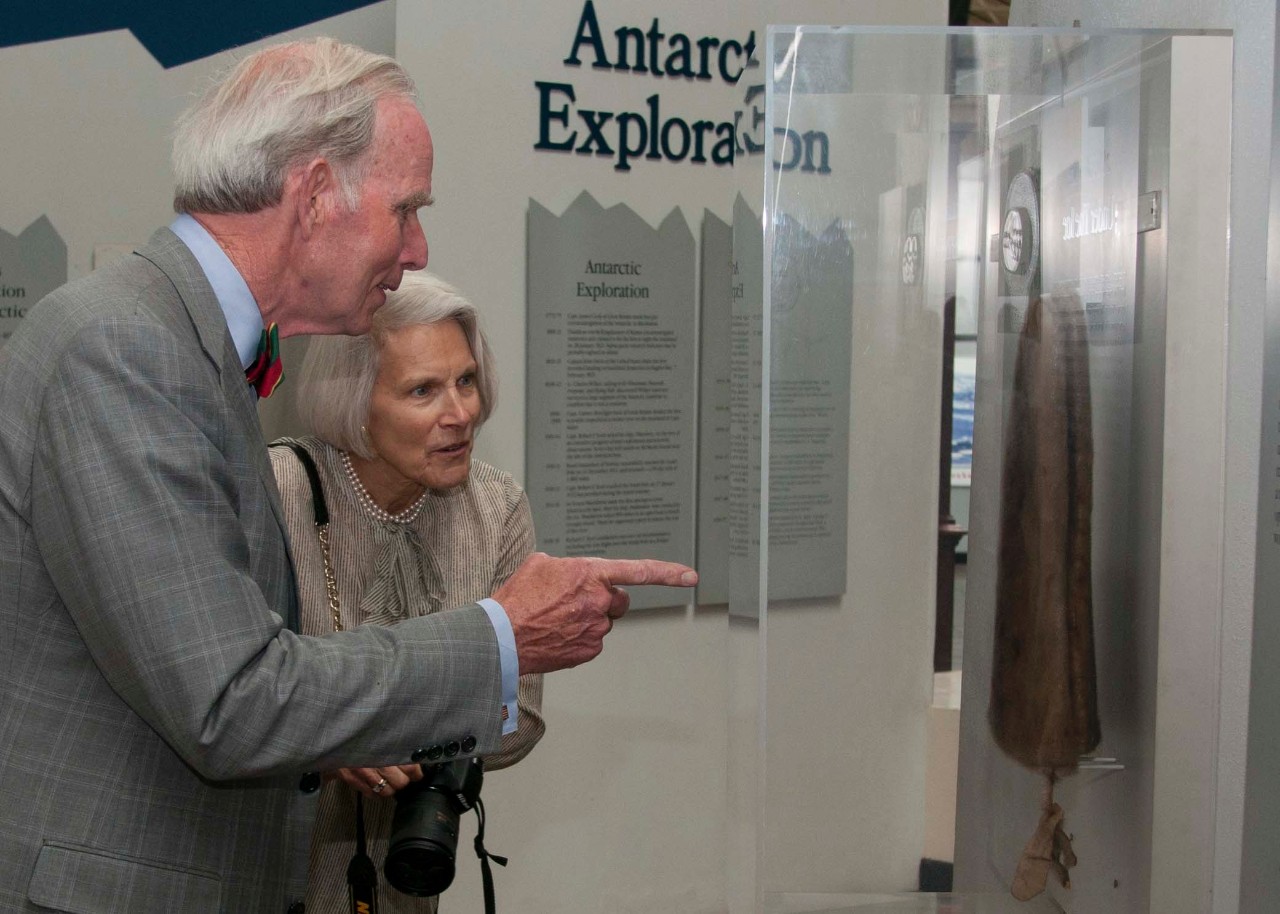 Caption: WASHINGTON (May 15, 2014) Thomas Byrd, grand-nephew of Adm. Richard Byrd, and his wife, Sharon Byrd, explore the National Museum of the United States Navy exhibit at the Washington Navy Yard on the Navy’s Antarctic exploration. Part of the exhibit features Adm. Richard Byrd's exploration of the North Pole. Byrd was there attending the museum’s lunchtime lecture given by an author who recently published a book on his ancestor’s race to be the first to fly over the North Pole. (U.S. Navy photo by Devon Sorlie/Released)

WASHINGTON (NNS) -- Just about everyone has a notable ancestor somewhere in their family line. Whether it is royalty, a musician, an actor, actress or some historic figure, we all look to that person and think, "That is my potential." Two people visited the Washington Navy Yard to get a deeper understanding of that potential and their notable ancestor, May 15.

The National Museum of the U.S. Navy (NMUSN) hosted a book lecture from Sheldon Bart, author of "Race to the Top of the World: Richard Byrd and the First Flight to the North Pole." Nothing special there, the museum regularly hosts authors with enticing topics. This time, there was something different. Two of the audience members had a personal interest in the topic.

The lecture was attended by two people from Rear Adm. Richard Byrd's family, Robert Byrd Bryer, Richard's Grandson and Thomas Byrd, Byrd's grand-nephew. Robert has had high level dealings with the business industry and Thomas, a former Marine, comes from a long line of presidents and publishers of the Winchester Star Newspaper, located in Winchester, Va.

Thomas came to learn more about his ancestor.

"There is always more to learn about the contributions that they have made," Thomas said. "That is why I am here today, to hear more about Adm. Byrd's flight and his exploration."

In his book, Bart details a time when large portions of the earth never felt the tread of humans. In that time, two rivals battled to have an aviation first of flying over the North Pole. The men, Richard Byrd, a Navy officer and early aviation pioneer and Roald Amundsen, a hardened veteran of polar expeditions, both wanted to have that honor. Even more than 90 years after, the controversy remains: Who was there first? With unrestricted access to Richard Byrd's archives, Bart offers compelling evidence of the truth in this odyssey.

Thomas was in for a surprise, he had no idea that NMUSN had an exhibit on polar exploration which features one of the collapsible huts his great uncle brought with him to the pole.

"It's hard to believe they were able to survive," Thomas said. "When you compare the technology that we have now to just keep warm versus what they had then with gloves and sleeping bags and the whole nine yards. It is commendable that he chose to go through that type of life."

It turns out that Robert followed his grandfather's lead in his own endeavors.

"I am fascinated with what my grandfather had to do," he said. "I had the good fortune, quite by accident, of following in his footsteps down in Antarctica -- working down there three times. So, I have taken a big interest in his background."

He feels that though his methods might have been different, it is hard to fault his success. "He certainly followed an unusual path," Robert said. "He went on -- from very unconventional expedition and exploration standpoint -- to do and achieve things nobody else had ever done."

Robert knew the author and had spoken with him before. Thomas, though, had never spoken with the author, but he was impressed by his storytelling.

"I thought he was very convincing, I thought he did a great job," Thomas said. "It was a very thorough examination on points that critics have had on Adm. Byrd's life."

To learn more about the Navy's polar exploration visit Naval History and Heritage Command's showcase on it at http://www.history.navy.mil/special%20Highlights/Polar/Polar-index.htm