Apollo 11: The Navy’s Role in the Recovery Operation 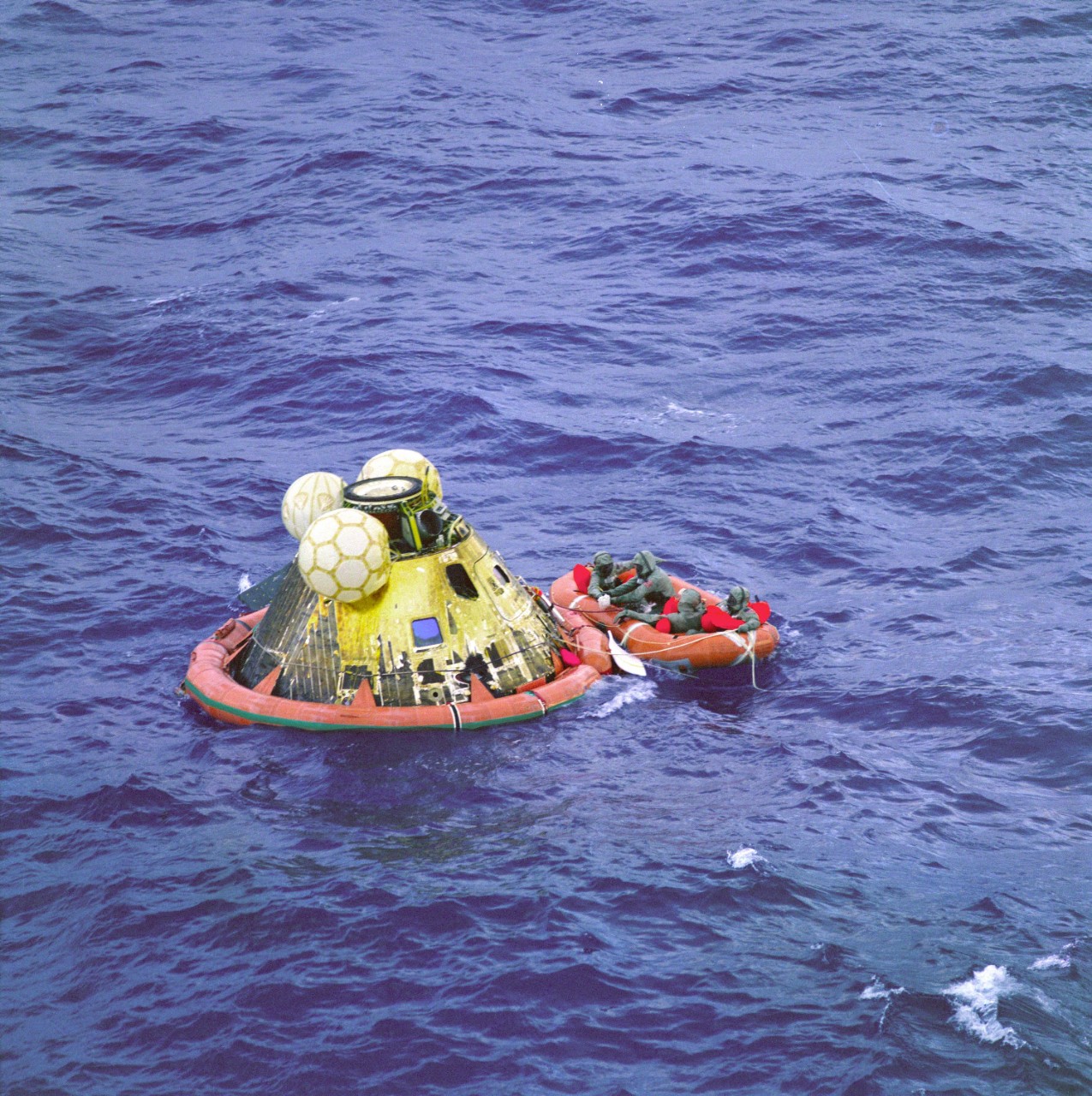 It was 4:40 a.m. on 24 July 1969, in a remote part of the Pacific Ocean, when the lookouts aboard USS Hornet (CV-12) spotted the fireball. Four minutes later, a double sonic boom ripped through the night.[1]

Inside the source of the irruption, Apollo 11’s command module Columbia, sat Neil Armstrong (the mission commander), Michael Collins (command module pilot), and Edwin “Buzz” E. Aldrin Jr. (lunar module pilot), all “in good shape,” they now reported.[2] As the command module slowed and its parachutes deployed, Navy combat swimmers aboard a Navy helicopter caught sight of it and sprang into action.[3] The recovery of Apollo 11 was now underway.

The success of this mission depended on close, effective cooperation between the Navy and the National Aeronautics and Space Administration (NASA) that dated back to the earliest days of the space program and pertained to such key areas as manning and training, engineering and testing, and, of course, recovery of spacecraft after splashdown and the rescue of the crew.

For this recovery mission, as it related to the astronauts, the stakes were quite high. As historian Scott W. Carmichael explains, even a slight deviation from the plan and the course for reentry into the Earth’s atmosphere would mean “astronauts could find themselves alone, at night, hundreds of miles from their intended splashdown target, without communications, in a sinking spacecraft within shark-infested waters.”[4]

The Navy therefore deployed some of its best swimmers, a detachment from Underwater Demolition Team 11. Lieutenant Clarence James “Clancy” Hatleberg served as the detachment commander. Only 25 years old, Hatleberg was a consummate veteran of Apollo recovery missions.[5]

He helped organize dress rehearsals for the underwater demolition team (UDT) swimmers. These took place en route to and near the splashdown site and, unfortunately, piqued the attention of the areas’ sharks. In swarms, they disrupted the exercises on more than one occasion.[6] In the end, the swimmers were ready for almost every eventuality.

When Apollo’s command module splashed down in the early morning of 24 July, it immediately inverted, with the conical “top” of the spacecraft underwater and the circular “base” exposed to the surface. NASA’s specially designed “uprighting system”—automatic inflatables—corrected the situation within eight minutes, at which point Navy swimmers got to work affixing an inflatable “collar” to stabilize the spacecraft.[7] Next, the recovery crew and swimmers unloaded a raft into the water, inflated it, and tied it to the command module. They unloaded other rafts and equipment, too, for the decontamination phase.[8]

One of the swimmers opened the hatch briefly so he could throw in three sets of “biological isolation garments.” No one having visited the moon before, NASA scientists were taking precautions against any possible biological contamination, should it turn out to be the case that the moon harbored microbial organisms now clinging to the astronauts and everything they had touched. As another precaution, UDT swimmers applied an iodine solution to the hatch.

When the hatch opened again, the astronauts climbed out and onto a raft. Members of the recovery crew now doused the astronauts and each other in a solution of sodium hypochlorite.[9]

This part of the process did not go very well. The decontamination sprayers jammed in the open position, which meant that much of the decontamination solution spilled into the sea, into the rafts, and onto the floating collar of the command module. These surfaces became extra slippery as a result. Moreover, according to an after-action report, the “swimmers found that the decontaminant, sodium hypochlorite, will produce nausea and eye irritation.”[10] Finally, having been lifted by sling hoist and pulled into the recovery helicopter, Armstrong and Collins, still wearing their biological isolation suits, worried that they might actually overheat.[11] The suits by definition were hermetically sealed and operated like incubators.

There was quite a rush, therefore, to get the men from helicopter to deck to quarantine chamber (the “mobile quarantine facility,” a modified caravan trailer). Once inside, Armstrong, Collins, and Aldrin were finally allowed to change into clean clothes—in this case, flight suits in a photogenic light blue. They then proceeded to a picture window to be photographed receiving President Nixon’s in-person congratulations.

Nixon was not the only dignitary on board Hornet that morning. His chief of staff and secretary of state had also made the several-thousand mile trip. Also present were the administrator of NASA and the commanders in chief of military forces in the Pacific region.[12]

Indeed, Hornet was crowded with visitors, both real and virtual. Hundreds of millions of people became party to the events on board as reporters broadcast live from the flight deck.[13] At the same time, Hornet had to accommodate a good deal of broadcast and telecommunication equipment, dozens of members of the press, and a large contingent of NASA scientists, engineers, and contractors. In addition, then, to ensuring the survival of the astronauts and the recovery of their spacecraft, Hornet’s crew also had to facilitate a presidential visit and what turned out to be the greatest press event of the 20th century.[14]

There were still other extraordinary tasks required of Hornet’s crew, including the recovery of the command module by specialized winch.[15] In addition:

And finally, there were the astronauts, who had to be supported in their quarantine trailer as Hornet steamed back to Hawaii.

Later that day, 24 July, the astronauts got to work again. Recovery crews had hoisted the command module out of the water and on board, where they towed it to the quarantine trailer. They then connected the trailer to the command module by way of a plastic tunnel (hermetically sealed, of course). The astronauts were now able to transfer photographic film and containers laden with dust and rocks—all records of the trip and objects of myriad planned scientific studies—to a decontamination lock, where the material could finally pass into the hands of NASA personnel.[21]

Meanwhile, Hornet set course for Pearl Harbor, where the quarantine trailer, still not to be opened, would be lifted onto a truck and transported to Hickam Air Force Base. On 26 July, when Hornet arrived at Pearl Harbor, thousands of civilians, including Honolulu’s mayor, cheered from the shore.[22]

As yet, no reporters had interviewed the astronauts, still in quarantine, and global demand for news of their experience was now insatiable. The press coverage of the mission, including the recovery operation, followed on nearly a decade of hope and anxiety around the “space race,” the competition between the United States and the Soviet Union in space exploration and, by logical extension, rocket and missile technologies. This competition happened in the context of interest around the globe in the progression of the Cold War: Which of the world’s two superpowers would prevail? An accomplishment as great as a successful manned mission to the moon would confirm the U.S. advantage in the space race and in the Cold War more generally. But for now, the first men to accomplish this feat—perhaps at that moment the three most interesting men on Earth—were off limits.

The only people allowed into the quarantine trailer were a physician (Dr. William Carpentier) and an engineer (John Hirasaki), who had to remain in the trailer for the duration of the quarantine, lest the seal be compromised by their early exits.[23]

The duration of the quarantine, conceived in an abundance of caution, was long: three weeks. Moreover, quarantine could have been extended should scientists or medics find reason to believe that lunar material presented a biological threat.[24]

The first week kept the astronauts busy with medical tests, debriefings, and flight reports.[25] The second week proved more challenging, despite the presence of a ping-pong table, a television, and a telephone. “Quarantine quickly became oppressive,” as historian William David Compton describes it. The astronauts reported their urge to leave, which only intensified as it became clear that the moon had been devoid of life. “I want out,” Collins declared.[26]

Finally, the Interagency Committee on Back Contamination agreed to release the astronauts a day early.[27] Free at last, Armstrong, Collins, and Aldrin took a brief rest before embarking on a world tour aboard the vice president’s jet.[28]

NASA and the Navy

Navy contributions to the space program made breakthroughs like this possible. In addition to assisting with aerospace research and supplying some of the most capable astronauts, including Armstrong and Aldrin, the Navy collaborated with NASA in other key ways. The Navy’s most important contributions were in recovery missions like the one for Apollo 11. Only the Navy had the competencies and resources to ensure that astronauts could return to Earth and land on water, by far the safer and more expedient option than a terrestrial landing, which did not become available until the early 1980s.

The priority of the Apollo missions and Apollo 11 in particular was not simply to put men on the moon. The men also had to make it back to Earth alive. For this critical phase of the mission, the Navy assumed the crucial responsibility for devising and supplying solutions.

The irony must have dawned on Navy and NASA personnel on board Hornet that day: It was not just in space but here on Earth where NASA’s astronauts were vulnerable. The dangers here on Earth were different, of course, and quite mundane, the perennial dangers familiar to sailors everywhere: the wind, the water, and the sharks.

[14] “Greatest” in the sense that this was the highest attended live broadcast in history with respect to the proportion of the world’s population that tuned in to radio or television at the time.