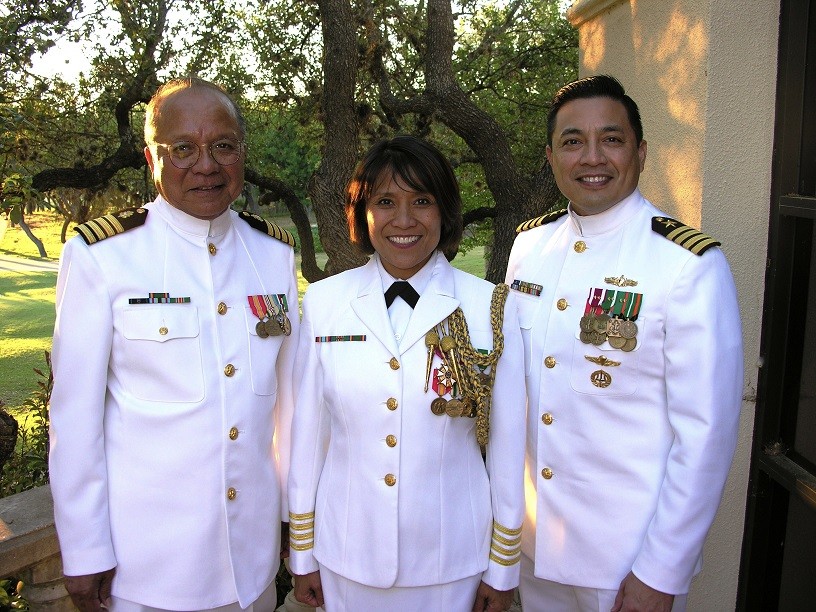 Over the past year, the Naval History and Heritage Command has published profiles of several female Navy trailblazers. Vice Admiral Raquel Cruz Bono was the first female Navy medical officer to achieve the rank of three-star admiral and was the second director of the Defense Health Agency. She’s a leader who leads by example, serving others.

Bono was born in the Philippines. When she was six months old, her family moved to Minnesota so that her father could finish his medical training. They moved back to the Philippines when she was seven, but then soon started packing again for her dad’s fellowship in Canada before settling permanently in San Antonio, Texas.

Bono calls her mom the “secret sauce.” With four young, rambunctious children and four international moves in less than 12 years, Mrs. Cruz held the family together. She turned packing into an adventure, ensuring that each move resulted in a loving, tight-knit home. The Cruz kids called themselves the “Big 4.”

In the spring of 1979, Bono graduated from the University of Texas at Austin. That fall, she started medical school at the School of Medicine at the Texas Tech University Health Sciences Center. Doctor Cruz, her father, encouraged her to join the Navy. Her brother was then attending the U.S. Naval Academy and both siblings became naval officers, rising through the ranks together.

The 1980s was a decade of training. Bono graduated from medical school in 1983. She then completed her surgical internship and residency at the Naval Medical Center Portsmouth and one last year focusing of trauma and critical care training at the Eastern Virginia Graduate School of Medicine. She finished her training just as Operations Desert Shield and Desert Storm began.

Deployed to an in-country fleet hospital, Bono learned via a letter from her mother (there were no cell phones in those days) that her father was on the USNS Mercy (T-AH-19) heading to the Persian Gulf. He was also part of the Navy family serving in his reserve role as a surgeon. He’d gotten called up after she was deployed, so Bono asked Army helicopter pilots if she could participate in one of their training runs to Mercy. They agreed and she got to see her dad.

During our recent conversation, Bono spoke repeatedly about the importance of family. She and her husband are raising a blended family of three daughters. Bono deliberately expanded her Navy life so that she never had to choose between her job and her girls.

When her daughter’s school was closed for a snowstorm, she brought the kindergartner into the office and asked her to attend a staff meeting, taking notes. The five-year-old’s summary was short and concise. Bono’s daughters all have firm handshakes, a skill they learned after attending formal Navy birthday parties as teenagers.

Bono knew that if she led by example, her subordinates, who were mostly male, would follow. They also started bringing in their children to formal events and took the needed time off to take care of their families. Bono created a strong, healthy work culture at her command simply by telling folks that she was rearranging her schedule to attend her daughter’s soccer games and cross-country meets.

Bono’s message to seven-year-old girls with the world in the front of them is, “[y]ou can do anything, you can go wherever you want to go.” Bono’s parents instilled these beliefs in her, she shared them with her daughters, and she wants all little girls to believe in themselves.

Thank you, Admiral Bono, for your service to the United States, for leading by example, for inspiring others to follow your leadership model.