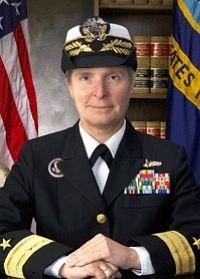 Women can serve in every naval community except special operations and submarines. There are 25 females and 14 African Americans among the Navy’s 268 active duty and reserve admirals.

Officer and enlisted naval women are participating in the wars in Iraq and Afghanistan in a variety of jobs including in the CBs and as pilots, medical professionals, and military policemen. Many of them have suffered injuries. Hospital Corpsman Second Class Jaime S. Jaenke and Culinary Specialist First Class Regina R. Clark are among those naval personnel killed in combat.

One of those female Admirals mentioned earlier became a Surface Warfare Officer in 1976. Between 1979 and 2000, she had 13 years at sea on six ships, completed six deployments and six shipyard overhalls. She commanded USS MOUNT BAKER from November 1993 to August 1995 before becoming the senior military assistant to Secretary of Defense William Cohen in January 1997.

She also commanded USS CAMDEN from December 1998 to July 2000. In 2001, she became the first warfare qualified woman promoted to the rank of Rear Admiral in U.S. military history.

Oliver Stone personally requested this female Navy officer by name to serve as a military technical adviser for his film “W” released in October 2008.

Though now retired, she continues to contribute to the defense of our nation as Senior Advisor to the Undersecretary for Intelligence & Analysis, the Chief Intelligence Officer, at the Department of Homeland Security.

She is Rear Admiral (RDML) Deborah A. Loewer, USN Retired. 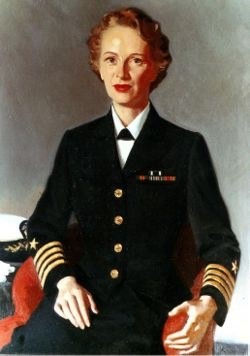 On 30 July 1942, President Franklin D. Roosevelt signed Public Law 689, establishing a program for women in the U.S. Navy as an integral part of the naval reserve. The Navy’s newest members served for the duration of World War II plus six months. On 2 August the President of Wellesley College, became the director of the Navy’s female reserve program and the first female naval officer with the rank of Lieutenant Commander.

One of these female Navy officers served as liaison between the Bureau of Aeronautics and the Navy’s female reserve program, better known as the WAVES. She persuaded the bureau leaders to integrate the female reservists’ into aviation training and to make widest use of the qualified WAVES. During the remainder of the war over 20 percent of the 90,000-plus female reservists worked in the aviation community performing a variety of duties ranging from air traffic controller to aviation mechanic. They helped train most Navy pilots during World War II.

She became the Director of the WAVES in February 1946. When she retired in 1953, she received the Legion of Merit Award for her contributions as the WAVES director.

In her memoirs she concluded with these words:

"I admit to great pride in having had the privilege of being one of the leaders of an outstanding group of women, the WAVES. To them I shall always owe a debt of gratitude for they, by their performance, loyalty, and dedication and their pride in service, made our accomplishments possible."

She was Captain Joy Bright Hancock, the founder of the longest running military aviation magazine, the Naval Aviation News published at the Naval History & Heritage Command at the Washington D.C. Navy Yard.

These two women are sterling examples of what the United States Navy has to offer for the advancement of woman of courage and intelligence, both today and yesterday.