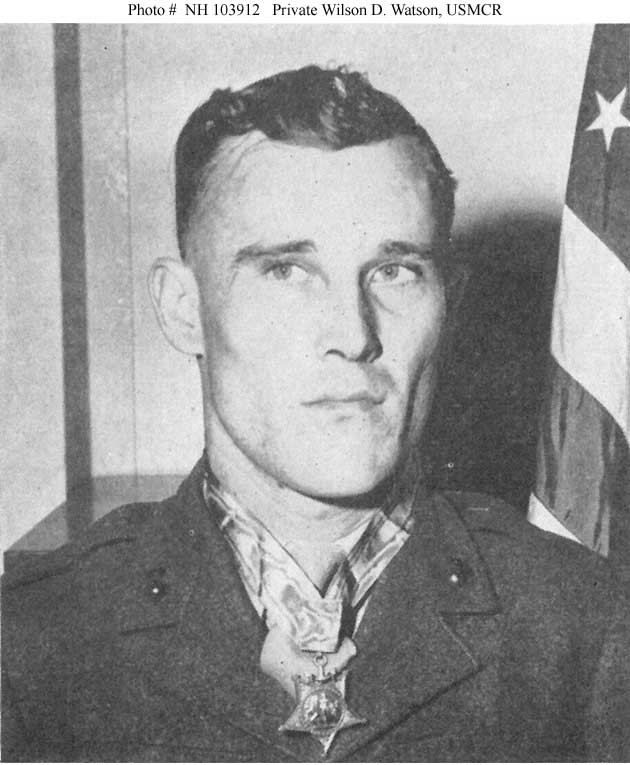 Description: Halftone reproduction of a photograph, copied from the official publication Medal of Honor, 1861-1949, The Navy, page 278. Wilson D. Watson received the Medal of Honor for conspicuous gallantry and intrepidity at the risk of his life on 26-27 February 1945, during the Battle of Iwo Jima. U.S. Naval History and Heritage Command Photograph.
Related Content

Medal of Honor citation of Private Wilson Douglas Watson, USMCR (as printed in the official publication "Medal of Honor, 1861-1949, The Navy", page 278):

"For conspicuous gallantry and intrepidity at the risk of his life above and beyond the call of duty as Automatic Rifleman serving with the Second Battalion, Ninth Marines, THIRD Marine Division, during action against the enemy Japanese forces on Iwo Jima, Volcano Islands, 26 and 27 February 1945. With his squad abruptly halted by intense fire from enemy fortifications in the high rocky ridges and crags commanding the line of advance, Private Watson boldly rushed one pillbox and fired into the embrasure with his weapon, keeping the enemy pinned down single-handedly until he was in a position to hurl in a grenade, and then running to the rear of the emplacement to destroy the retreating Japanese and enable his platoon to take its objective. Again pinned down at the foot of a small hill, he dauntlessly scaled the jagged incline under fierce mortar and machine-gun barrages and, with his assistant BAR man, charged the crest of the hill, firing from his hip. Fighting furiously against Japanese troops attacking with grenades and knee mortars from the reverse slope, he stood fearlessly erect in his exposed position to cover the hostile entrenchments and held the hill under savage fire for 15 minutes, killing 60 Japanese before his ammunition was exhausted and his platoon was able to join him. His courageous initiative and valiant fighting spirit against devasting odds were directly responsible for the continued advance of his platoon, and his inspiring leadership throughout this bitterly fought action reflects the hightest credit upon Private Watson and the United States Naval Service."