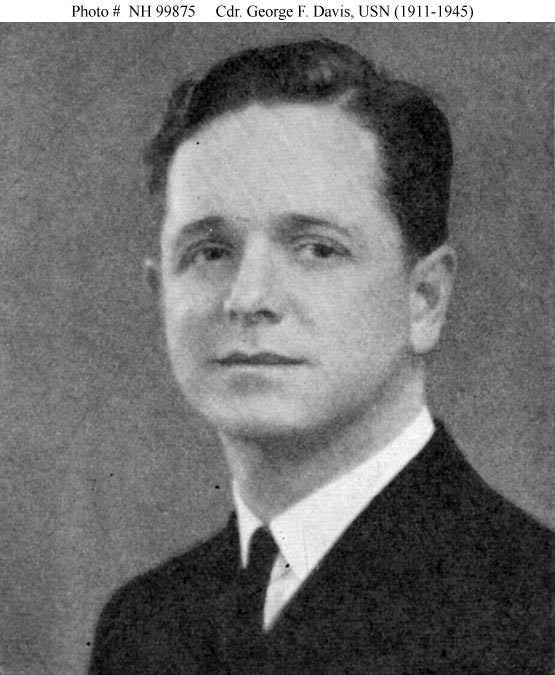 Description: Halftone photo from Medal of Honor, 1861-1949, The Navy, page 173. Commander Davis was awarded the Medal of Honor, posthumously, for conspicious gallantry and intrepidity while in command of USS Walke (DD-723) when she was hit by a Japanese suicide plane during the Lingayen Gulf operation, 6 January 1945. U.S. Naval History and Heritage Command Photograph.
Related Content

"For conspicuous gallantry and intrepidity at the risk of his life above and beyond the call of duty as Commanding Officer of the U.S.S. Walke engaged in a detached mission in support of minesweeping operations to clear the waters for entry of our heavy surface and amphibious forces preparatory to the invasion of Lingayen Gulf, Luzon, Philippine Islands, 6 January 1945. Operating without gun support of other surface ships when four Japanese suicide planes were detected flying low overland to attack simultaneously, Commander Davis boldly took his position in the exposed wings of the bridge and directed control to pick up the leading plane and open fire. Alert and fearless as the Walke's deadly fire sent the first target crashing into the water and caught the second as it passed close over the bridge to plunge into the sea off portside, he remained steadfast in the path of the third plane plunging swiftly to crash the after end of the bridge structure. Seriously wounded when the plane struck, drenched with gasoline and immediately enveloped in flames, he conned the Walke in the midst of the wreckage; he rallied his command to heroic efforts; he exhorted his officers and men to save the ship and, still on his feet, saw the barrage from his guns destroy the fourth suicide bomber. With the fires under control and the safety of the ship assured, he consented to be carried below. Succumbing several hours later, Commander Davis, by his example of valor and his unhesitating self-sacrifice, steeled the fighting spirit of his command into unyielding purpose in completing a vital mission. He gallantly gave his life in the service of his country."