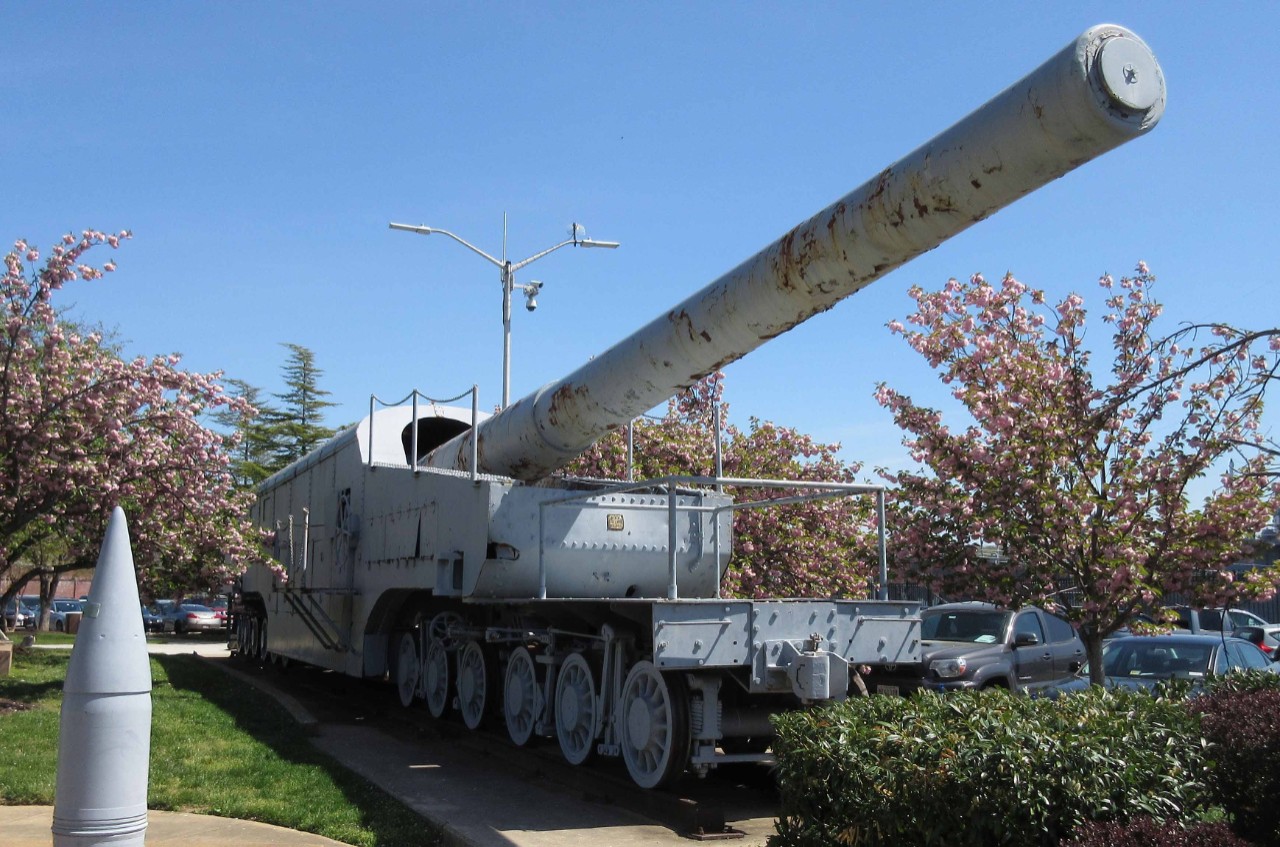 The Mk 1 mount consists of a steel main frame supported at each end by a span bolster that rests on a pair of six-wheel railroad trucks. A 14-inch 50 caliber naval rifle is mounted by its trunnions to the girders of the main frame. The breech of the gun and the entire carriage, with the exception of the forward most truck, are enclosed by a sheet metal body. The body is of riveted and welded construction and has an arched roof to enclose it.

There are three windows in each side of the body and the rear end is open. The exterior on both sides has multiple hinged doors to gain access to the interior. Two large elevation hand wheels are mounted to both sides of the exterior at the gun’s trunnions. Platforms with railings are mounted below the elevating wheels on both sides.

The Mk 1 14-inch railway mount currently in the collection of the Naval History and Heritage Command and displayed at the Washington Navy Yard is Bureau of Ordnance #148. The gun is from the second batch of mounts manufactured by Baldwin and completed in July 1918. This second batch of gun mounts (146-148) was actually manufactured for the Army, the first group (141-145) having been built for the Navy. Although the Army mounts were shipped to France, they arrived too late to see service and none were ever fired at the enemy. All of the 14-inch railway mounts were turned over to Army control after World War I and shipped back to the US in March 1919.

In response to a request from BuOrd for one of the mounts to use in tests, Army Ordnance transferred mount #148 to the Navy, shipping it to the Washington Navy Yard (WNY) on 27 April 1922. It was then transferred to Naval Surface Warfare Center-Dahlgren (NSWC-Dahlgren) and used at the Proving Ground. The original 14-inch Mk 4 Mod I gun was removed in 1944 and replaced with a 14-inch Mk 11 Mod 0, which is the gun currently in the mount. Railway Mount #148 was returned to the WNY from NSWC-Dahlgren in the fall of 1987 and put on permanent display in Willard Park. A portion of the original armored superstructure had been removed while the mount was used for testing and a replacement was fabricated once the gun returned to the WNY.