First sword surrendered as the Japanese provided navigation for the Allied ships to enter Tokyo Bay in preparation for the official surrender ceremony.

One Japanese sword mounted in standard Imperial Japanese Navy fittings (Kai-gunto). The hilt (tsuka) is covered with black rayskin (samegawa), wrapped with brown silk cord (tsuka-ito). A brown silk cord and tassel is attached to the hilt. The pommel (kabuto-gane), pommel ring (sarute), collar above the guard (fuchi), and ornament on the handle under the wrapping (menuki) are decorated with relief impressions of cherry blossoms. The handguard (tsuba) is a flat oval shaped disc with an incised ray design. There is a small disk on the front side of the kabuto-gane decorated with a floral design. The scabbard (saya) is wood covered with black lacquered rayskin. There are two metal hangers (ashi). The ashi, throat (koiguchi), and chape (ishizuke) are decorated with relief impressions of cherry blossoms. There is a small metal decoration at the lower third of the saya (semagane) that wraps around the saya with a cherry blossom and leaf offshoot in the center. 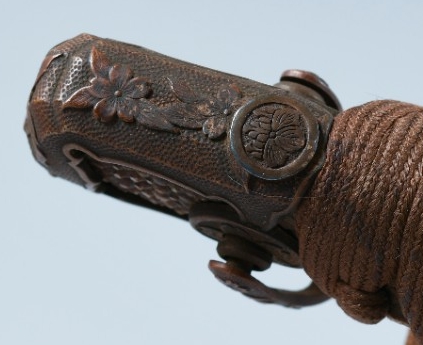 Considered the first Japanese sword surrendered to US forces in the Pacific Theater, this sword came from the personal collection of Admiral Robert B. Carney. The sword was surrendered by the official party led by Captain Yoshihiko Takasaki from the Yokosuka Naval District on 27 August 1945. On the morning of the 27th, USS Missouri (BB-63), escorted by USS Nicholas (DD-449), USS O’Bannon (DD-450) and USS Taylor (DD-468) waited at the mouth of Sagami Bay (Sagami-wan) to meet the Japanese Destroyer Hatsuzakura. Nicholas approached the Japanese ship and dispatched a whaleboat to bring Captain Takasaki and his party aboard. Accompanying Takasaki were Captain Inaho Otani, an intelligence officer from the Navy General Staff in Tokyo, and a number of pilots and interpreters to assist Third Fleet vessels in navigating into Tokyo Bay. 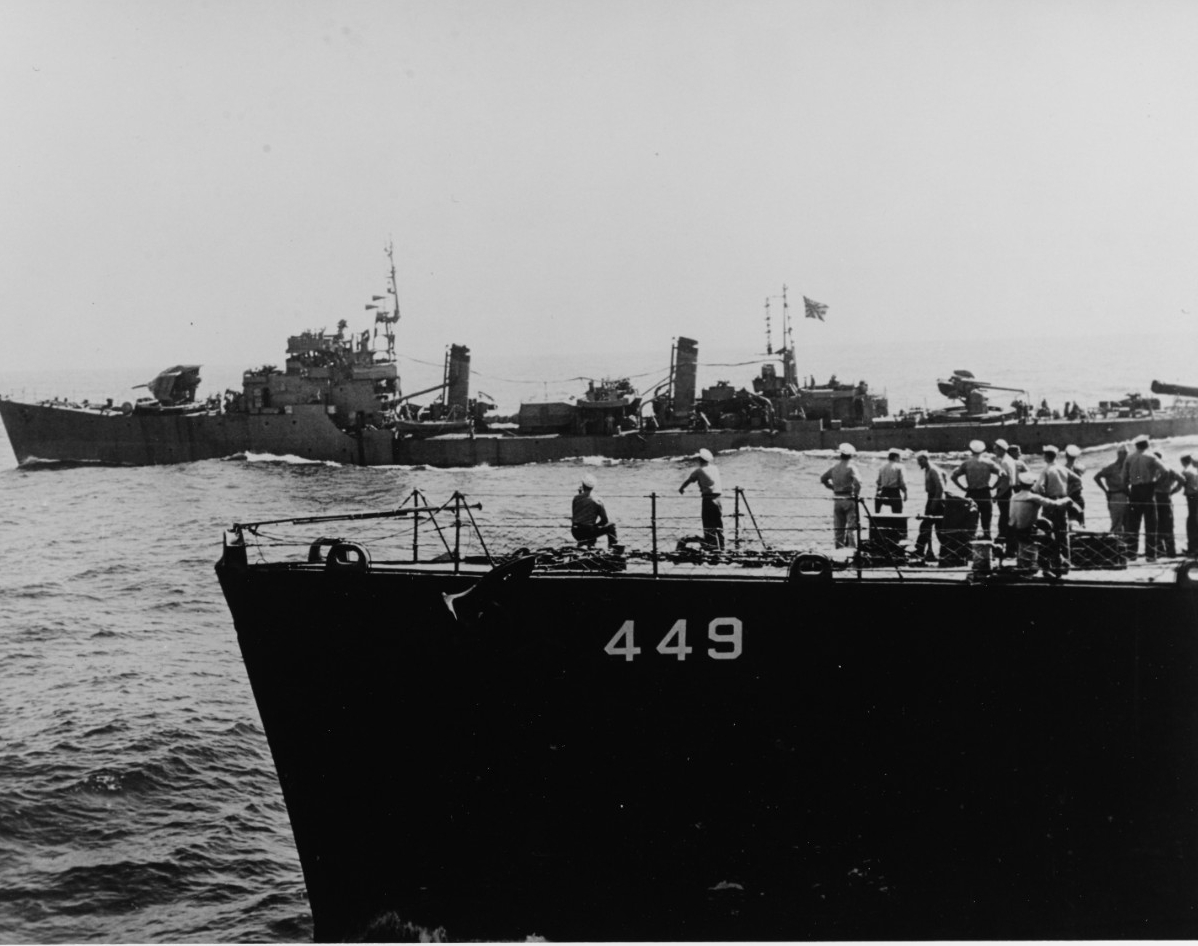 Description: Sailors on the bow of USS Nicholas (DD-449) watch the Japanese destroyer Hatsuzakura steaming in company off Tokyo Bay, 27 August 1945. The Japanese ship had brought out several naval officers and harbor pilots for a conference on USS Missouri concerning the entry of the Third fleet into Sagami Wan and Tokyo Bay. Official U.S. Navy Photograph, now in the collections of the National Archives.

As soon as the party was aboard Nicholas, the officers surrendered their swords. The Japanese party was next transferred to the Missouri by breeches buoy using Fleet Admiral William F. Halsey’s personal bosun’s chair. Once aboard the Missouri, the Japanese officers met with Admiral Carney, Halsey’s Chief of Staff. Carney arranged for the entry of the Third Fleet into Tokyo Bay and the occupation of the naval base. Later, on 30 August, Carney accepted the surrender of Yokosuka Naval Base from Vice Admiral Michitaro Tozuka of the Imperial Japanese Navy on behalf of Halsey. Carney was also present aboard the Missouri on 2 September 1945 for the official Japanese surrender ceremony. 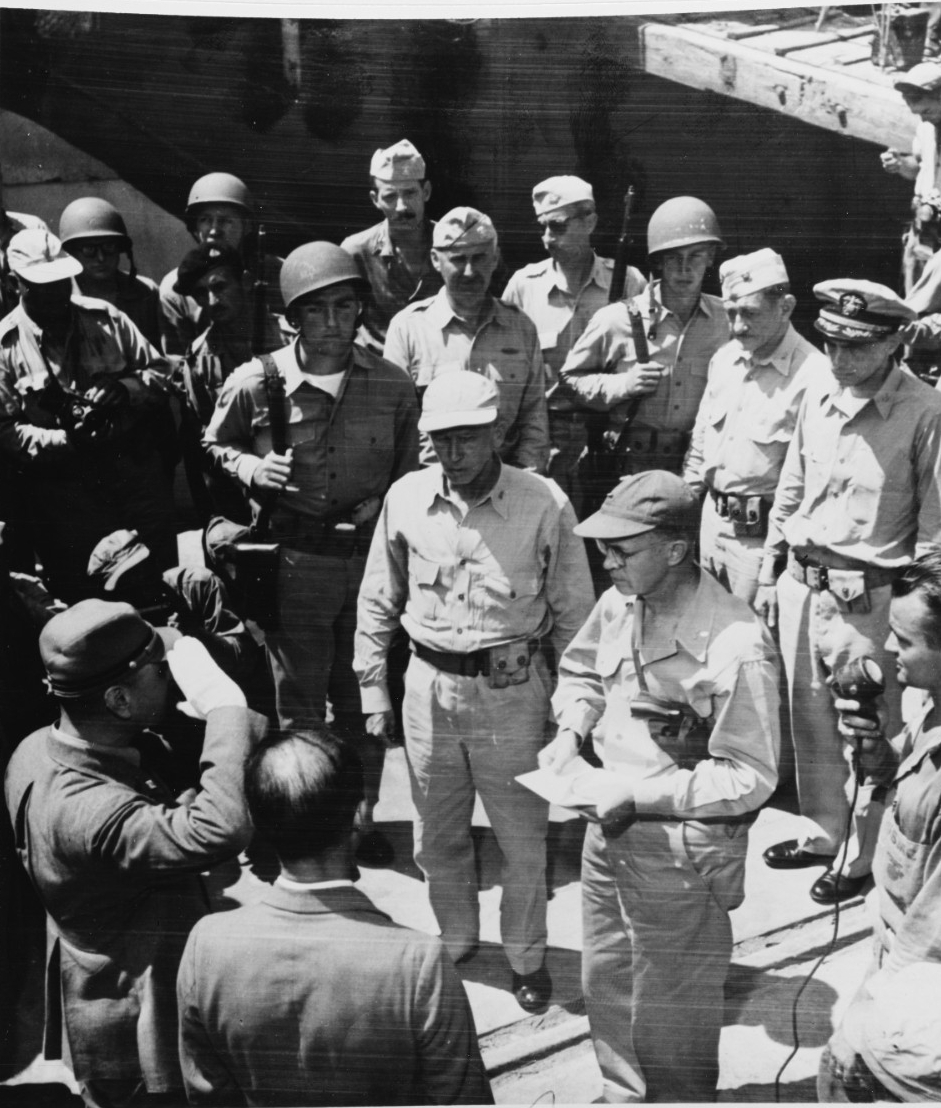 Caption: Yokosuka Naval Base, 30 Aug. 1945. RAdm. Robert B. Carney (center with shoulder holster), Chief of Staff to Adm. Halsey, is saluted by VAdm. M. Totsuka, Cdr. 1st Jap. Naval District, as he turns over the base.